Marc-Andre Barriault admits he didn't fight like himself in his rookie year with the UFC. That's all going to change on Saturday's Fight Night
By E. Spencer Kyte, on Twitter @SpencerKyte • Jun. 16, 2020

Saturday night brings a fresh start for Marc-Andre Barriault, as the former TKO two-weight champion makes his first appearance of 2020 opposite Oskar Piechota, eager to put his rookie campaign in the UFC behind him.

“Everything went very fast for me this last year,” said the French-Canadian middleweight. “I was coming in after a huge year with TKO, being a double-champ, riding an eight-fight winning streak. I was just so confident and I wanted to keep the momentum going, but I didn’t take the time to realize how it is to be in the UFC.”

After taking just a single loss in a dozen fights outside of the Octagon, the 30-year-old went 0-3 inside the UFC cage in 2019, landing on the wrong side of the scorecards in bouts with Andrew Sanchez, Krzysztof Jotko, and Junyong Park, with all three bouts coming in an eight-month stretch between May and December.

“I think I was a little bit overwhelmed by everything,” said Barriault, who won the middleweight and light heavyweight titles in the Canadian regional promotion before graduating to the UFC. “When I look at my first three fights in the UFC, I was not impressed with myself because I was not the same beast I was before. I think I tried to look good and I just need to unleash the beast in every moment because that’s who I am.”

Barriault’s experiences last year and his assessment of his performances are not uncommon.

Numerous talented fighters have graduated from the regional circuit riding a wave of momentum, certain that everything will remain the same when they cross the threshold into the UFC Octagon, only to be given a cold dose of reality once they get there.

But Barriault wasn’t badly beaten in any of his fights — he lost his debut with 29-28 scores across the board, landed on the wrong side of a split decision verdict in his bout against Jotko, and again went the distance when he returned in December, losing on the scorecards 30-27, 29-28, and 29-28.

No one likes to lose, and three consecutive setbacks will weigh on anyone, but what is most important is how a fighter deals with those setbacks. The mental side of things is often more important than anything else, which is why Barriault’s focus throughout his camp has been on leaving what happened last year in the past and treating this weekend’s bout with Piechota as a new beginning. 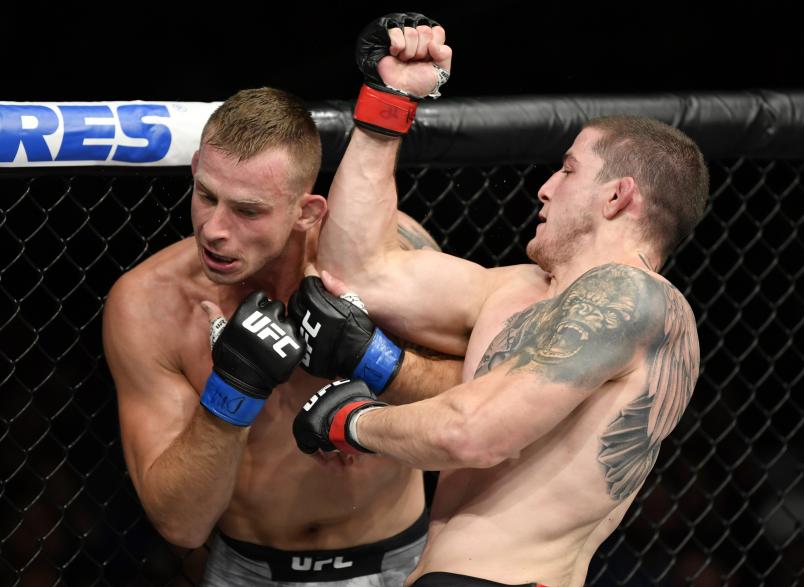 “All my fights were very close and I think if I did a little more, especially at the end of rounds, I could be at least 2-1,” he said, reflecting on his efforts and how things played out last year. “I fought experienced guys and they knew how to win fights and fought to not lose, where me, I always go in there fighting to win.

“I think the secret for me is to be myself. I’m not the most technical guy. I’m not the most well rounded guy, but I have something unteachable inside of me and that’s what I’ve based my game plan around: to close the distance, go into the chaos, and do my things. I’m tough, I hit hard, I know how to finish fights, so I just need to be myself, let everything loose, and have fun.

“I’m focused on this being a new beginning,” he added. “I’m reborn as the fighter I was before entering the UFC. Right now, I’m just focusing on looking forward and re-connecting with my inner beast.”

Part of what makes this an intriguing matchup is that Piechota enters Saturday’s contest in a similar position as Barriault.

After arriving in the UFC with an undefeated record, the Polish grappler picked up victories in each of his first two Octagon appearances, establishing himself as a new name to track in the middleweight ranks. But a step up in competition brought his first professional loss, and bouts against Rodolfo Vieira and Punahele Soriano last year each resulted in Piechota being finished.

“I think it’s going to be a very good matchup,” began Barriault. “I know that Oskar is a good jiu-jitsu guy, he can strike, and we’re in the same situation, so we have to go out there and not just win, but win impressively.

“I hope he will be ready for a good fight,” he added. “I hope he’s ready to engage and not run away from a fight.”

Over a 28-month span between May 2016 and September 2018, Barriault competed eight times and every time, the night ended with him standing in the center of the cage, his hand raised in victory.

It’s now been 19 months since the former TKO standout has experienced that feeling and he’s yearning to feel it again.

“I can’t wait to have this feeling back, especially for the first time in the UFC,” he said. “All the hard work I’ve done the last 10 years is on the line. I want to prove to myself, but also to the UFC why they signed me last year when I was a double-champ.

“Right now, I need to go out there and prove to myself and the company that I have what it takes to compete at this level and that I belong in this game.”