Manuwa's Fists Do The Talking

"I don’t feel I have to make any noise. I feel my fighting speaks for itself. It’s just the way I am." - Jimi Manuwa 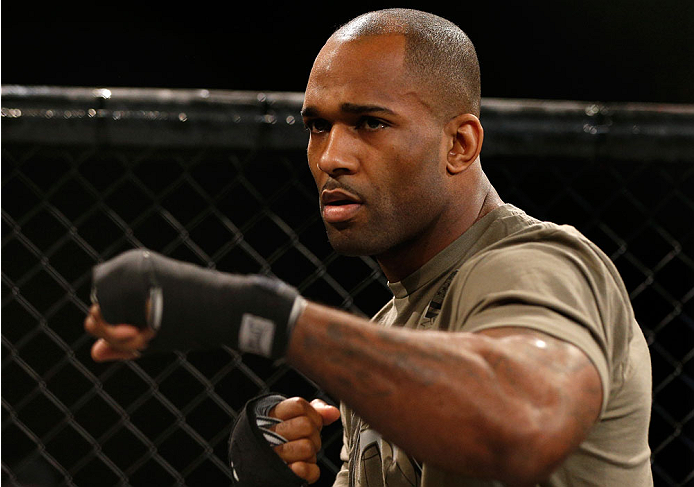 The refrain is the same from Jimi Manuwa’s three nurses every time he leaves to go to the gym:

So far so good for the UFC light heavyweight, who balances his day job in the Octagon with his role as a father to three daughters, aged 14, seven, and five. That’s a full-time job in itself, but it’s one Manuwa embraces.

“I’ve taken to it naturally, being a father,” said the 34-year-old Londoner. “I’ve got three beautiful daughters, and I’m bringing them up the way I want to bring them up and the way that I think best, so they’ve taken to that really well and I’m really proud of all of them. They’re all doing so well in school and they’ve all got big aspirations as well. I’m teaching them what I know from life and they’re growing up to be wonderful girls.”

Girls who care about what happens to their father every time he puts the gloves on, though as he puts it, “They just expect dad to win all the time.”

Again, so far so good, as Manuwa has won all 14 of his pro MMA bouts leading up to Saturday’s main event battle with top contender Alexander Gustafsson. It’s the kind of fight that can alter Manuwa’s career, shooting him from the fringe of the top ten into title contention if he emerges victorious, especially with Sweden’s Gustafsson poised for a second shot at the 205-pound crown with a win. Yet the “Poster Boy” remains calm as the biggest fight of his career approaches.

“I only think about it when I get asked the question,” he laughs when asked about the possibility of taking his place alongside the winner of April’s Jon Jones-Glover Teixeira championship bout. “I’ve never called anyone out in my career and I don’t plan to. But it would have to be Jon Jones after I beat him (Gustafsson), I think. But I don’t think about Jon Jones. When I beat Gus, then I meet Jon Jones or whoever the champion is. I feel unstoppable at the moment; it’s just about putting it together on the night.”

That has never been an issue for Manuwa to this point in his career. In fact, with all 14 of his wins coming by way of knockout or submission, few put it together better. Yet while one-punch knockout power is his calling card, in his last two fights against Cyrille Diabate and Ryan Jimmo, he’s walked away with TKO victories due to his opponents suffering injuries and being unable to continue. It’s a bizarre twist to be sure, and in some ways, it makes the already intimidating Manuwa even more so because now you just don’t have to worry about getting knocked out; you have to worry about getting injured too.

“It has been a bit strange,” said Manuwa, winner of three UFC bouts. “A win’s a win to me, and I just go in there and fight and do what I do best, which is put pressure on people and make it a violent situation for them. It’s just the way I fight.”

True, but it also adds to the legend too.

“That’s a good thing for me,” he laughs.

The funny thing about Manuwa is that even though a record like his would make most fighters start making outlandish statements about their power and start believing their own hype, the Brit remains low-key and laid-back outside the Octagon, and he’s not about to change anytime soon.

“I don’t feel I have to make any noise,” he said. “I feel my fighting speaks for itself. It’s just the way I am. I don’t feel I’m the best fighter or the best finisher; I’m still learning. I have to be humble. I still get submitted in training, I still get punched and hurt in training, so I’ve got to be humble. I’m fighting, sparring and training with guys that are a lot better than me, and I think that’s where it comes from.”

So if you expected him to come blasting out of the gates verbally in the long lead-up to Saturday’s bout, you would be left disappointed. Instead, Manuwa has plenty of respect for “The Mauler.”

“I see the second best fighter in the world,” he said of Gustafsson. “I don’t see any flaws in his game. I can’t say he’s a bad striker, bad grappler, or bad wrestler. He took the champion (Jones) to his limit, and I see him as a great challenge.”

It’s not a challenge Manuwa is shying away from though. That’s not his style. Sure, he can be soft-spoken and relaxed when the gloves are off, but when they’re on, that’s a different story because he’s got three girls to go home to and make sure they see that daddy’s not hurt.

And who needs more motivation than that?