Manuwa Readies For Next Chapter After Retirement

Manuwa was one of the best punchers – pound for pound – in the UFC over nearly seven years in the Octagon, and even when he wasn’t scoring highlight reel knockouts, he was always in a memorable fight, win or lose.
By Thomas Gerbasi • Jun. 12, 2019

You might assume that someone with the knockout power Jimi Manuwa possessed wouldn’t be one to take some good-natured ribbing with a smile. Yet instead of scowls and glares, Manuwa found it just as funny when I told him that we were going to adopt him as an American considering he was born in Sacramento, California.

And why wouldn’t we? Manuwa was one of the best punchers – pound for pound – in the UFC over nearly seven years in the Octagon, and even when he wasn’t scoring highlight reel knockouts, he was always in a memorable fight, win or lose.

And he did it without social media antics or press conference scuffles. His fighting spoke loud enough.

“I don’t feel I have to make any noise,” he told me before his 2014 bout with Alexander Gustafsson. “I feel my fighting speaks for itself. It’s just the way I am. I don’t feel I’m the best fighter or the best finisher; I’m still learning. I have to be humble. I still get submitted in training, I still get punched and hurt in training, so I’ve got to be humble. I’m fighting, sparring and training with guys that are a lot better than me, and I think that’s where it comes from.”

He never lost that attitude, even as he rose to the upper reaches of the light heavyweight division and fought the best competition night in and night out. Sometimes it didn’t go his way, but when it did, such as in wins over Corey Anderson and Ovince Saint Preux, you could easily believe that if he hit anyone clean, it was lights out.

“I just go in there and fight and do what I do best, which is put pressure on people and make it a violent situation for them,” he said. “It’s just the way I fight.”

Born in Sacramento, raised for several years in Nigeria before making his home in London, England, Manuwa has become a citizen of the world over the course of the last 39 years, even traveling to Sweden for training camps with former opponent Gustafsson at the Allstars Training Center in Stockholm. It’s fitting, because the popular Brit was adopted by fans around the globe for his fighting style and no nonsense demeanor. 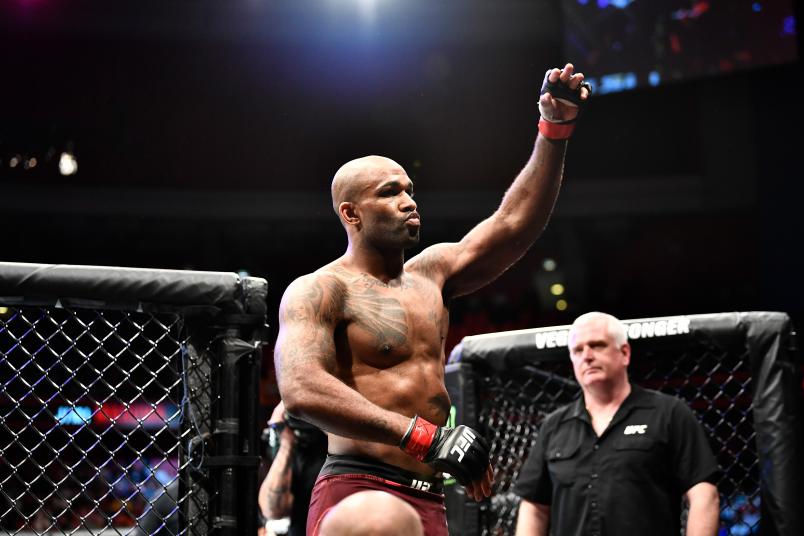 STOCKHOLM, SWEDEN - JUNE 01: Jimi Manuwa of England prepares to enter the Octagon prior to his light heavyweight bout against Aleksandar Rakic of Austria during the UFC Fight Night event at Ericsson Globe on June 1, 2019 in Stockholm, Sweden. (Photo by Jeff Bottari/Zuffa LLC/Zuffa LLC via Getty Images)

STOCKHOLM, SWEDEN - JUNE 01: Jimi Manuwa of England prepares to enter the Octagon prior to his light heavyweight bout against Aleksandar Rakic of Austria during the UFC Fight Night event at Ericsson Globe on June 1, 2019 in Stockholm, Sweden. (Photo by Je

He didn’t need to. Winner of 17 of his 23 MMA bouts, with 15 of those wins coming by way of knockout, Manuwa got a late start in the pro game at 28, but he never saw his age as a roadblock to his success.

“I’ve got good genes, and I haven’t got that many miles on the clock,” he said, and age wasn’t an issue as he won six of his first eight UFC bouts. A four-fight losing streak would prompt him to announce his retirement earlier this month after a loss to Aleksandar Rakic in Stockholm, and it was a good call for the family man who had nothing left to prove.

In an Instagram post discussing his decision, Manuwa spoke of his family and it reminded me of an early interview where I asked how his kids were taking his day job as a prizefighter. He said that every time he went to the gym, they said the same thing:

Daddy’s home now, ready for the next chapter.