Manuwa 'one or two' wins away from a shot at Cormier

One glance at Jimi Manuwa, and the words “38 years old” are not the first ones that come to mind. But the light heavyweight contender isn’t bragging about his still youthful appearance.

“I’ve got good genes,” he laughs. “And I haven’t got that many miles on the clock.”

That lack of wear on his proverbial tires is why the “Poster Boy” is still in the top five at 205 pounds and in Saturday’s UFC London main event against Jan Blachowicz. It’s not a fight he initially expected, but it’s the one he’s got, and he’s prepared accordingly. 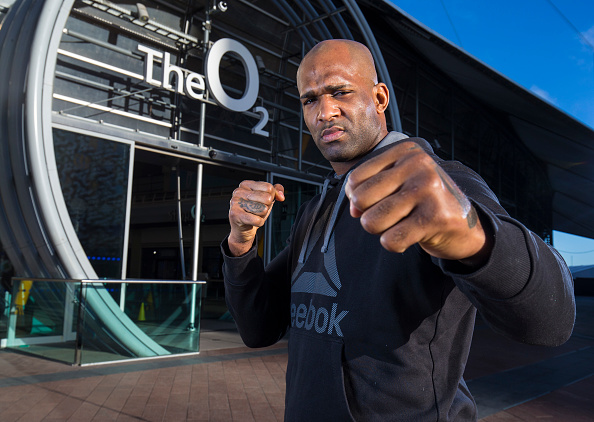 “I was a little bit surprised,” he said of the rematch with a man he decisioned in 2015. “But Jan’s a warrior so I knew he would step up to the plate. I was more surprised that no one in the top five or even the top ten would accept a fight. So it wasn’t a surprise that Jan would accept the fight.”

Since the UFC’s announcement that the promotion was returning to Manuwa’s hometown, it was a given that the local favorite was going to be on the card, but no one stepped up until Blachowicz answered the call. As for that top five, Manuwa and his teammates Alexander Gustafsson and Ilir Latifi are taking up three spots, and there is no desire on their part to fight each other.

“There’s so many people that we can fight so we don’t have to fight each other,” he continues. “We, as a team, can sort it out with each other where one of us can fight at heavyweight or one of us can move down. We’ll figure it out when the time comes. But for now, I’m focused in on Blachowicz.”

It’s a distinct sign that Manuwa is, indeed, a mature 38-year-old, interested in things more important than glory. Another one is that when asked if his motivation for fighting Blachowicz is stopping the one fighter he has not been able to in a winning effort, he says that’s not the reason he gets up every morning to train.
RELATED CONTENT: Flashback - Jimi Manuwa | London Fantasy Cheat Sheet

He does admit that the first win over the Polish veteran, which marked the first and only time Manuwa went the distance in a fight, left a sour taste in his mouth.

“It does give me extra motivation knowing how I felt after our first fight, that I didn’t finish him,” he said. “I felt frustrated. I went into the back changing rooms after our last fight, I threw down my gloves and I said, ‘That was s**t, that was a s**t performance.’ Even though I won, I wasn’t happy.”

There are days like that in this sport, and Manuwa knows it. But what matters is the win, and then learning from a

I think, realistically, I need at least one more big win, if not two,

performance that doesn’t live up to his standards. On Saturday, Manuwa gets a do-over with Blachowicz, and if he does what he expects to, there may be a lot more talk about the Londoner getting the call for a title shot by the end of the year. Again, Manuwa takes a measured approach to such chatter.

“I think, realistically, I need at least one more big win, if not two,” he said of a shot at Daniel Cormier’s belt. “I think people want to see the rematch with Volkan (Oezdemir) or me with someone like Glover (Teixeira). But who knows. After this fight with Blachowicz I’m definitely in the mix for it. Me and DC don’t like each other and that goes without saying. So I think people do want to see me fight him. People might write me off against him, but I believe in myself and what kind of fighter am I if I think, ‘Oh, if I fight him, he’s going to take me down and do this or do that.’ I believe in myself and I believe in what I can do.”