Manuwa: "Nobody Is Going To Be Able To Take What I'm Bringing"

"I don’t even hope he’s ready for it. I know that with what we’ve been working on, nobody is going to be able to take what I’m bringing."

In fact, competing under the bright lights in front of legions of passionate fans is the payoff to the weeks and months of physical, mental and emotional strain that precedes every fight.

Jimi Manuwa had already done the hard part, logging another grueling camp in Stockholm, Sweden at the Allstars Training Center. He’d been back home to London, said goodbye to his family and made the transatlantic trek to Sao Paulo, Brazil, where he was scheduled to face Thiago Santos in a highly anticipated main event showdown between two exciting powerhouses.

Six days before the fight, the British knockout artist felt a pop in the back of his leg. He’d torn his hamstring and in that instant, everything he’d given of himself in that training camp felt like it was all for naught.

“It was highly frustrating,” said Manuwa, recalling the mid-September heartache. “It was probably the worst thing that could have happened.

“I had done all the training, been through a grueling camp, made all the sacrifices, being away from my family — the day before it happened was my youngest daughter’s birthday, so I missed all of that — and then for that to happen and me not actually fight and get the glory was highly frustrating. It was a nightmare, but we got through it.”

As far as injuries go, a torn hamstring isn’t that bad, and within a couple weeks, Manuwa was back in the gym, picking up where he had left off prior to his trip to Sao Paulo, logging a second consecutive camp built around sharing the cage with the former middleweight from Brazil.

The duo will finally meet this weekend in Toronto, as Manuwa and Santos kick off the UFC 231 pay-per-view main card.

“Now it just feels like I’ve done two camps for Thiago Santos,” he said. “I feel great. I’m in the best shape of my life, literally, and I can’t wait for Saturday.”

Although there are twin championship clashes at the top of the card, this contest might be the most explosive pairing on this weekend’s fight card — a meeting between two proven finishers with a flair for the dramatic and a history of engaging in entertaining bouts.

Part of what made it an exciting matchup when it was first cobbled together was that Santos was venturing up in weight, following in the footsteps of Anthony “Lionheart” Smith, whom he had beaten at the start of the year.

While Santos remained at middleweight, Smith stopped making the cut down to the 185-pound weight limit, started fighting at light heavyweight and immediately made an impact in his new division, earning first-round stoppage wins over former champions Rashad Evans and Shogun Rua before earning a main event assignment against recent title challenger Volkan Oezdemir.

A massive middleweight, “Marreta” saw Smith’s success and believed he could replicate it if he too made the move, so when Manuwa’s original opponent Glover Teixeira was forced to withdraw, the 34-year-old Santos jumped at the opportunity to take on the Top 10 fixture. 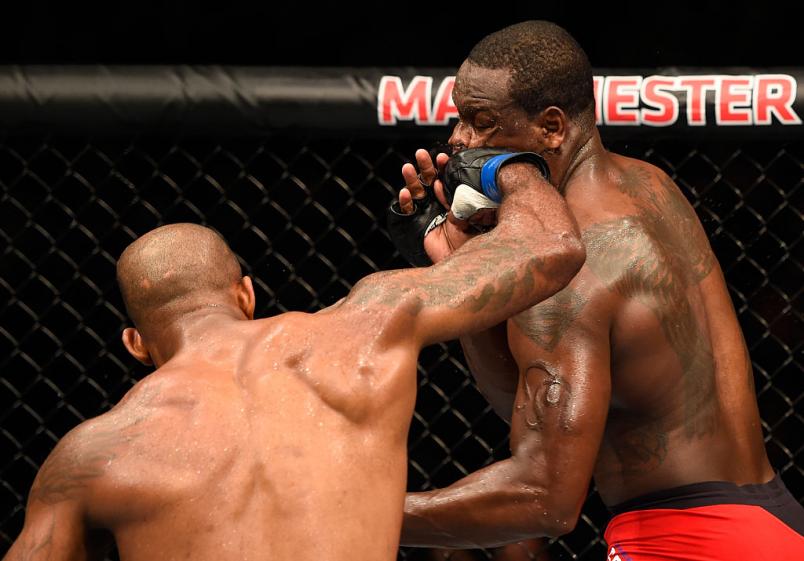 Sao Paulo’s loss is Toronto’s gain and while Manuwa is happy to see new talent venturing into the light heavyweight waters, he’s also ready to defend his turf and show Santos — and any other middleweight with relocation on the mind — that things are different in the 205-pound weight class.

“There is always going to be new blood, there are always people evolving and it’s a good test for us, to keep us on our toes,” he began. “With that being said, I’m going to have to show these guys the difference between middleweight and light heavyweight, especially with a power puncher like me.

“He’s got to feel the difference,” Manuwa said of Santos, who remained on the September fight card in Sao Paulo, scoring a third-round stoppage win over Eryk Anders in a battle of bulked up middleweights. “I can’t tell them the difference; they’re going to have to feel the difference. This sport is about performing and showing, rather than telling.”

Saturday’s contest marks only the fourth time in 22 fights that London’s “Poster Boy” has competed outside of England, with his trip to Toronto joining an appearance in Krakow, Poland and excursions to Las Vegas and Anaheim on the short list of international adventures he’s undertaken in his career.

Although he admits to being far more comfortable fighting at home, Manuwa is warming to the idea of venturing abroad more as he looks to build his name beyond the United Kingdom.

And unlike prior to his trip to Sao Paulo in September, the perennial contender didn’t go back home before flying to Toronto, giving him even more motivation to finish things with Santos quickly on Saturday.

“I didn’t go home before I came abroad; I stayed abroad in Sweden,” explained Manuwa, who is 1-2 fighting outside of England. “I came straight from Sweden over here just to detach myself from the family and home; keep it as a camp and the fight being the end of it. That’s what I’ve done this time and now we’ve just got a few more days to go.”

It has been a difficult few months for the 38-year-old Manuwa, between missing family milestones and not making it to his September engagement with Santos in Brazil, but with their “do-over” just a couple days away, the soft-spoken, heavy-handed knockout artist is more than ready to finally step back into the Octagon and put on a show for the fans in Toronto.

“It’s going to be a shootout. I’ve made sure that I’ve got full artillery for it and I don’t even hope he’s ready for it. I know that with what we’ve been working on, nobody is going to be able to take what I’m bringing.

“It’s going to be fireworks; that’s the only word for it.”