Back-To-Back Knockouts Have French Flyweight Manon Fiorot Feeling Confident And Ready To Rocket To The Top Of The Division.
By Zac Pacleb, on Twitter @ZacPacleb • Oct. 14, 2021

Despite Valentina Shevchenko’s outright dominance over the flyweight division, a steady influx of exciting talent continues to enter the relatively young weight class. From youngsters like Maycee Barber, Miranda Maverick and Casey O’Neill to more experienced athletes making their way up the ladder like Taila Santos, Alexa Grasso and Viviane Araujo, the division is filling out in a fun way. Perhaps no newcomer is a brighter example of that than 2021’s frontrunner for Newcomer of the Year: Manon Fiorot.

The France native is 2-0 with two dominant stoppage wins in her “rookie year,” and along the way, she has displayed a sharp, tactical standup game. Her finishing instincts have opened eyes, as well, and it seems like she’s on a rocket-like trajectory up the division. However, she gets her toughest test at UFC Fight Night: Ladd vs Dumont in Mayra Bueno Silva, a Brazilian submission ace who has shown the talent to compete with the best in the division. To Fiorot, Silva represents an opportunity to show off her entire skill set, and her intentions remain the same as always.

“I have no game plan for this fight,” Fiorot told UFC.com. “If I have to strike, I’ll strike. If I have to wrestle, I’ll do it. On the ground, I can finish the fight, too. My focus is on this fight. Not just a win, but finishing the fight.”

Given Silva’s submission record (both her UFC wins have come via armbar), there’s a sense that she will test Fiorot’s defensive grappling. Although Fiorot is prepared for that, she is anticipating a bit more of a standup battle and sees the matchup as an overall positive for her rising stock in the promotion.

“(Silva) has a lot of fights in the UFC, and she’s a good striker,” Fiorot said. “I’m pretty sure she wants to strike (with) me and get the clinch, so I think it’s a good fight for me. Her style is good for mine.”

A third-consecutive stoppage win should launch Fiorot into a bout with a ranked fighter, something for which she feels more than prepared. The Top 10 is wide-open, and with Shevchenko chewing up contenders faster than ever, “The Beast” has a chance to position herself for a run toward a title shot in 2022. 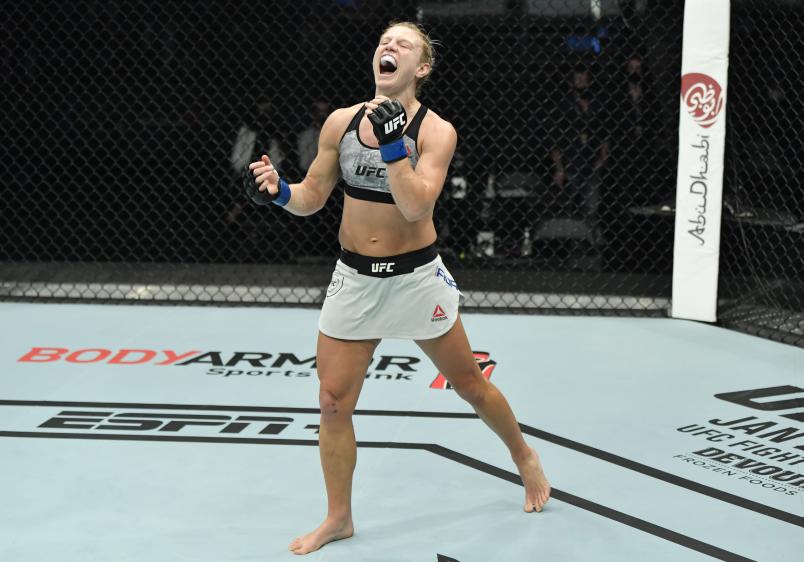 Manon Fiorot celebrates after her victory over Victoria Leonardo in a flyweight fight during the UFC Fight Night event at Etihad Arena on UFC Fight Island on January 20, 2021 in Abu Dhabi, United Arab Emirates. (Photo by Jeff Bottari/Zuffa LLC)

It’s not only her quality, but Fiorot’s style that has fight fans excited to see her in action again. She said she appreciates her growing fandom and hopes they appreciate the way she always chases the finish.

Moreover, she is eager to show even more of her quality on October 16. The 31-year-old believes she has the goods to make some noise in the flyweight rankings within the next few months and, if she stays on her current trajectory, she already has her mind on her goals for her second year in the UFC.

“Definitely enter the Top 10,” Fiorot said. “In one year, I hope to fight for the title.”