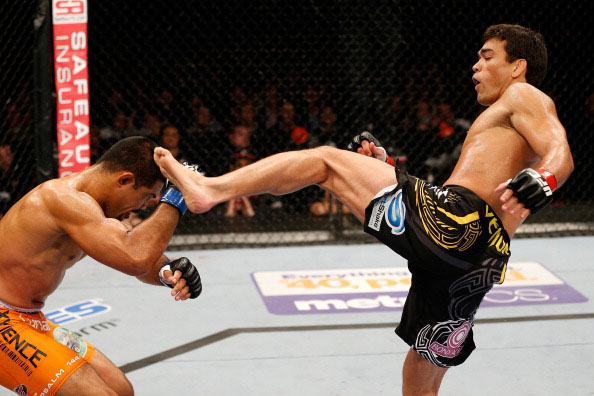 Former UFC light heavyweight champion Lyoto Machida made a seamless move to the middleweight division Saturday night, knocking out friend and former training partner Mark Munoz in the first round of their UFC Fight Night main event at the Phones 4U Arena in Manchester.

“It’s very hard for me because Mark is a good friend to me, but as a professional I can’t think about that,” said Machida. "I have to do my job.”

There was little action in the opening two minutes, with Brazil’s Machida doing the only scoring with a kick to the body. A second body shot midway through the round landed even harder, and moments later, “The Dragon” went upstairs with his kick, with a left to the head dropping Munoz hard. Machida moved in for the finish, but seeing Munoz already dazed, he held up as referee Leon Roberts intervened at the 3:10 mark.

The controversial hand on the canvas marking a downed fighter rule reared its ugly head in the co-main event between lightweights Melvin Guillard and Ross Pearson, with a no contest verdict 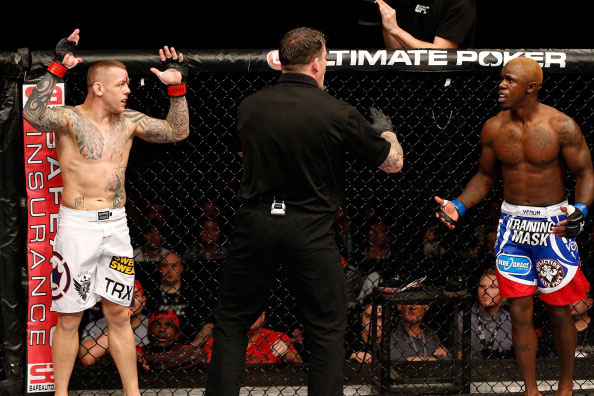 being rendered in the first round of what was shaping up to be an entertaining scrap.

Guillard was confident in his striking attack as the bout opened, yet while Pearson took his share of shots, he also ducked plenty, showing excellent defense. It was then the two scrambled to the mat that things got interesting though, as Guillard landed with two knees to the head as the fighters rose. The first was clearly legal, the second was borderline illegal at best due to Pearson’s hand touching the canvas, marking him as a downed fighter. Regardless, Pearson emerged with a nasty cut on his forehead, prompting referee Marc Goddard to halt the fight at the 1:57 mark and rule a no contest.

Joe Rogan interviews both men after the decision

It was another frustrating, yet victorious, outing for London light heavyweight Jimi Manuwa, as he saw his second consecutive fight end via TKO due to injury, as Ryan Jimmo was halted in round two after hurting his left leg. 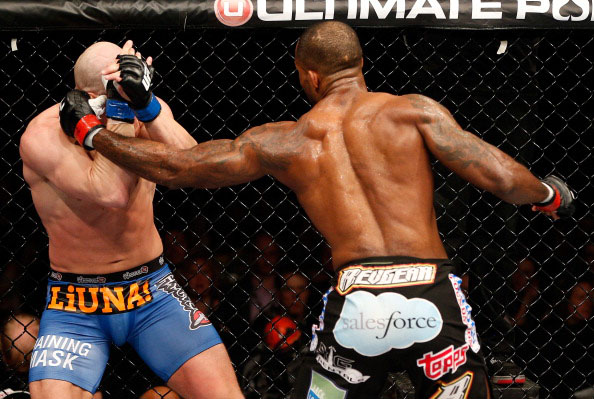 The unbeaten Manuwa, now 14-0, had an identical result in his February victory over Cyrille Diabate.

Edmonton’s Jimmo (18-3) came out blasting, hoping to repeat his seven second debut win over Anthony Perosh, but that didn’t happen, with a lock-up against the fence resulting instead. After a stalemate, referee Neal Hall separated the two, only for the fighters to end up back in the clinch. The two traded knees before another re-start, and it was largely a kick fest for the rest of the round until Manuwa landed some punches upstairs late.

A lock-up and re-start opened the second round, and from long range, Manuwa was able to score with kicks and control the pace of the fight. And though Jimmo had his moments, his continued clinching was only producing stalemates. After one such stalemate, the two broke and Jimmo fell to the mat after apparently injuring his left leg. Hall immediately stepped in, stopping the fight at the 4:41 mark.

There was plenty of good action in the opening round, with Tuck (7-1) the slightly busier of the two. It was Northern Ireland’s Parke (20-2) who was the more effective fighter though, as he repeatedly tagged Tuck with counter lefts and ended the stanza with a nice takedown.

Parke’s striking volume and steady pressure put Tuck on the defensive in round two, and the tide of the fight was visibly changing by the second as the former TUF Smashes winner repeatedly tagged his tiring foe.

Tuck made it more competitive in the last frame, but Parke remained a step ahead throughout, striking his way through the final five minutes to cap off his tenth consecutive victory.

A wild middleweight bout between veteran Alessio Sakara and late replacement Nico Musoke ended just as wildly as it started, with the debutant Musoke winning via first round submission. 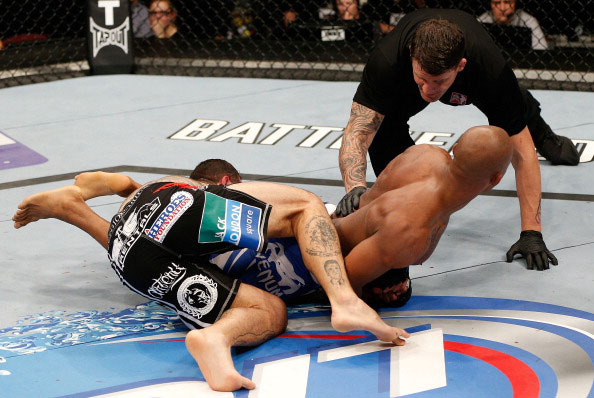 Sakara rocked the newcomer with the first right hand he threw, and he followed up with a thudding takedown before letting his foe up. Musoke took advantage of his good fortune by rocking Sakara standing, kicking off a heated exchange of punches before the Swede scored his own takedown. Sakara stayed busy from the bottom as Musoke looked to change position, and though the Italian escaped and got into the top spot, Musoke adjusted impressively, locking in an armbar that ended the bout 3:07 in.

Brazil’s John Lineker may have been fined for not making weight for the third time as a UFC fighter, but at least he’ll be picking up a win check as well, as he knocked out Phil Harris in the first round of their flyweight bout.

Harris’ striking piled up some points early, but Lineker’s bombs were hurting the Brit every time they landed, and after Harris got hurt and rocked several times with head shots, it was a left hook to the body that finally dropped the Portsmouth native and prompted a stoppage from referee Neal Hall at 2:51 of the first stanza.