Man Of The People

That loss to Sean McCorkle in the opening bout of UFC 119 pushed the heavyweight’s losing streak to six and dropped his record to 5-7 overall.

While the first six of those setbacks all came against major stars and established names, including Josh Barnett, Fedor Emelianenko and Alistair Overeem, offering little resistance against the unbeaten journeyman from Indianapolis seemed to justify the UFC brass’ initial inclination to buy out the remaining fights on Hunt’s contract and allow him to ply his trade elsewhere.

But a funny thing happened on the way to the now 44-year-old combat sports veteran washing out of the UFC — he started winning and developed a cult following amongst hardcore fight fans. 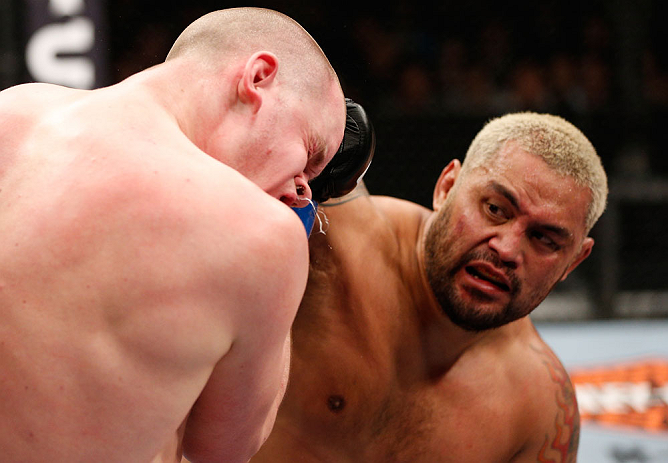 Hunt rebounded from his loss to McCorkle with three straight victories, beginning with a walk-off knockout of Chris Tuchsherer, followed by a unanimous decision triumph over fellow veteran Ben Rothwell, and another “one-hitter-quitter” against Cheick Kongo a year later. When Alistair Overeem was forced out of his championship showdown with Junior Dos Santos at UFC 146, fans took to social media to start a “#RallyForHunt” campaign, lobbying for “The Super Samoan” to be afforded the chance to step up and fight for the heavyweight title.

The title shot didn’t materialize at the time, but he would share the Octagon with Dos Santos a year later when the Brazilian returned after dropping the belt back to Cain Velasquez. It turned into one of the greatest fights in the history of the UFC heavyweight division — a back-and-forth battle between two hardened powerhouses that ended with one of the most un-heavyweight finishes of all-time as Dos Santos landed a spinning hook kick in the final minute of the third round to collect the victory.

If that bout with Dos Santos made it clear that Hunt was a legitimate contender, his next bout against Antonio “Bigfoot” Silva in Brisbane, Australia cemented his standing as one of the most beloved and must-see fighters on the roster, as the duo went toe-to-toe, blow-for-blow, round-for-round over the course of 25 minutes in an epic clash towards the end of 2013.

Hunt would get his chance to fight for UFC gold a year later, filling in on short notice for Cain Velasquez against Fabricio Werdum in a bout for the interim title, where he would fall to the Brazilian in the second round.

He’s had mixed results since — and throughout his 17-fight run in the UFC — but the truth is that Hunt became one of those few fighters who will be adored and followed regardless of whether he wins or loses a long time ago.

There is palpable electricity every time he takes to the cage because everyone knows he just needs to land one clean shot to secure a victory, and even though his granite chin has started to show a few cracks in recent years, the anticipation of Hunt delivering another signature walk-off win still brings people to the edge of their seat every time he strides into the Octagon.

He is a man of the people — an undersized heavyweight who looks more like the toughest guy at your local dive bar than an elite professional athlete and someone who reached incredible heights in his mixed martial arts career after it looked like the UFC brass was right for wanting to buy out his contract.

Hunt is also a pioneer — a trailblazer for the current wave of Australian and New Zealand talent climbing the ranks in the UFC today, including Tyson Pedro and Tai Tuivasa, who he will fight alongside this weekend in Adelaide when he makes his 18th foray into the Octagon to face Justin Willis.

An undefeated heavyweight prospect set to headline Saturday’s event at Adelaide Entertainment Centre, Tuivasa is not only Hunt’s protégé, but the rightful heir to his throne — a kid from West Sydney who is unfathomably tough, with thunder in his hands and far more athleticism than most would anticipate. Perfect through the first 10 fights of his career, including three consecutive victories in the UFC, he has the chance to stamp himself as a contender this weekend by beating Dos Santos.

Pedro also has a date with a former champion this weekend, stepping into the Octagon opposite Mauricio “Shogun” Rua prior to Hunt’s bout with Willis. While Tuivasa has more physical commonalities with the respected knockout artist, the start of Pedro’s time competing under the UFC banner has been more akin to Hunt’s experiences, as the raw, but talented light heavyweight has gone 3-2 to enter the weekend with a 7-2 record overall.

Neither would be where they are without Hunt first showing that it was possible for a fighter from “down under” to compete at the highest level and then sharing the lessons he’s learned both inside and outside of the cage with the next generation competitors.

In a way it’s fitting that Hunt’s appearance comes as part of the first event to be broadcast live in Australia, because while the ascension of Robert Whittaker to the top of the middleweight division and the emergence of Pedro, Tuivasa, Israel Adesanya, Dan Hooker and Alexander Volkanovski has brought greater attention to the sport, he was one of the figures who inspired many of the current crop of contenders from Australia and New Zealand to chase their combat sports dreams.

And just as mixed martial arts is ready to have a real moment in his homeland, Hunt deserves to be celebrated.

The last eight years have been an improbable and exhilarating ride, one that has seen Hunt go from unwanted cast-off to perennial contender while building a legacy as one of the most popular and entertaining competitors to ever grace the Octagon.