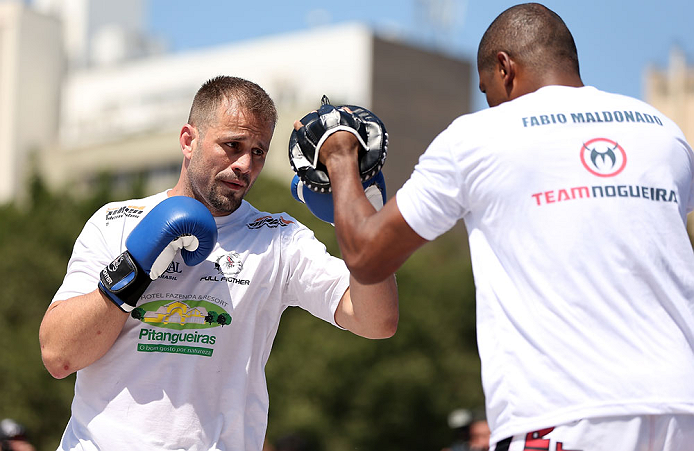 A former pro boxer that turned into one of Brazil's heaviest hitters in MMA, Fabio Maldonado was going to make two great fights in Nottingham last month.

First, he was scheduled to face Muay Thai champion Jorgen Kruth, but the Swedish fighter decided to retire. Then Maldonado was booked against another opponent known for his striking, Frenchman Cyrille Diabaté. Breaking down either of those fights, we could expect a real trade of bullets until the last man was left standing in the Octagon.

But wait, was Maldonado going to make two greats fights which didn't materialize? What about his bout this weekend against top prospect Glover Teixeira?

Well, this is the other part of the story, a story where destiny stepped in and inserted Maldonado in a match expected to be one of the best of the UFC 153 card in Rio de Janeiro, Brazil.

"Diabaté and Kruth were going to be great fights, but I had my red alert on that if one of the light heavyweights on the (UFC 153) card got injured, I'd like to step up," he said. "A fight against Rampage Jackson or Teixeira himself was welcomed and I asked for one of them if I had a chance. And also, I'm 32 years old, I can't sit down waiting on things; I need to pursue these challenges. It doesn't matter who's in front of me, I want to make a great fight. I don't choose opponents and I want to face whoever they book me to fight."

Asking for a fight of this magnitude is a tough call in many ways. Principally, when you're coming off two defeats and you call guys like Rampage and Glover out, insiders and fans look at you like you're just trying to promote yourself, and that you’re a fighter without anything to lose. Maldonado doesn't think he's in that spot. He just wants to let his punches fly, connecting with his foe's body or jaw.

That’s why we were 100% sure the matches against strikers such as Kruth and Diabaté would be insane displays of striking. But don't feel bad that those fights won’t get to unfold through, as Maldonado guarantees that against Teixeira, eyewitnesses won't have anything to lose, but much to gain.

"Fighters say they will trade punches on the feet and they don't,” he said. “But Glover has that hype, and he's proving he deserves it. He's strong, he's tough and I believe he's one of the best strikers in UFC. You know, I believe in my striking and I’ve improved, and I think my experience is bigger than his. On the other hand, his grappling and takedowns are shaper than mine. Anyway, I'm training pretty hard to spoil this hype and put on a super show."

One of the points made by Maldonado is valid, that the mix of grappling and takedowns has been his Achilles heels since he competed in local MMA shows. Taking a look at his prior fights against Kyle Kingsbury and Igor “The Duke” Pokrajac, which were two back and forth brawls, the deciding factor which resulted in victories by decision for Maldonado's opponents were the takedowns. For him, the preparation for Teixeira has made him adjust what he missed when training for his prior foes.

"I think a few times you train too much or you don't train enough," Maldonado said. "The important thing is to not try to bring excuses to the table and instead turn it into fixing the gaps I had. I know where I didn't do very well, and Teixeira will face a Maldonado with better tools, even on the feet."

If Maldonado has his fists sharpened for this fight, we know Teixeira will have his hands full. His accolades as an amateur and pro boxer, plus the manhandling of his foes inside the rings and cages of MMA, were proof. Add to that the way he dispatched his first adversary in the UFC, James McSweeney - with body shots - and you know the Sorocaba, SP native is for real in the striking department.

"I feel I owe the fans a showcase of my hands like I did against McSweeney in 2010," he says. "My strategy is that I want to knock people out, and even when I lost by decision, I tried to hurt the guys. People can expect that against Teixeira. I'm going to hurt him, attacking every single opening he gives and I'll make his life hell during those 15 minutes.

"What I need is two or three perfect strikes to put him on the canvas," Maldonado continues. "Of course I'm aware that the fight can go in another way, that it can end in one minute by various ways. But I know what I can do, and I know that it's hard for an opponent to impose some tactics on me when he's under a barrage of punches."