Maldonado: The Passion of a Warrior

"I have great respect for Joey Beltran but I enter the Octagon to get the job done and win." - Fabio Maldonado 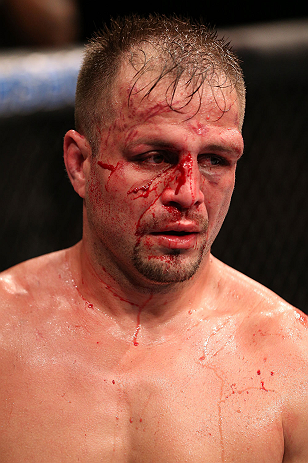 Mixed martial arts is a sport driven by the passion invested by the competitors inside the cage and the legions of fans supporting them from beyond the bright lights. For every significant victory or impressive performance a fighter logs in the live-fire environment of the Octagon, that work is amplified by the impression that action left on the fighting faithful.

The momentum created by fan support can become fuel to motivation a fighter throughout his journey. While the attention span of the MMA fan base is undoubtedly fickle - giving and taking their adoration based on outcomes - there is a select group of fighters who command attention and create anticipation every time their names hit the fight card.

Of this group, Fabio Maldonando is certainly a member.

The Brazilian slugger has grown to become a beloved commodity on the UFC roster. With a lion-sized heart and a granite chin, Maldonado has battled through the fire to earn a coveted spot on the list of fan favorites.

Whether or not he emerges victorious with every outing doesn’t seem to matter. His ability to bring the fight and put on an exciting show is one of the rare guarantees in an unpredictable sport, and because of this, fans love to watch him work.

A fighter who isn’t judged by the sum of his wins and losses is certainly rare in the ultra-competitive world of the UFC, and this isn’t something that is lost on Maldonado. The 33-year-old has carved out a place of respect on the sport’s biggest stage and done so by his willingness to fight inside the cage.

Whether it came as the result of dusting James McSweeney in his Octagon debut at UFC 120 back in 2010 or putting on a pure display of heart and will in a short-notice onslaught at the hands of Glover Teixeira at UFC 153, the end result was the same. Granted, the notches in the win column were different, but the fact Maldonado made a lasting impression on those who were watching was a victory in perhaps the most difficult sense.

He won’t have to look far for the fight in his next outing as he faces fellow scrapper Joey Beltran at UFC Fight Night on October 9.

“My fights are always very exciting, especially because my best quality is boxing,” Maldonado said. “I have noticed with every fight my fans have increased, which makes me very happy and inspires me even more to put on a show in the Octagon. That will certainly be the case against Joey Beltran.”

In facing “The Mexicutioner,” Maldonado will step into the Octagon with an opponent who is equally as notorious for waging war. The Team Alliance fighter has experienced mixed results throughout his career, but his willingness to sling leather inside the cage has never been debated.

The matchup is an early candidate for Fight of the Night honors, and Maldonado isn’t looking to disappoint. He carries admiration for Beltran, but once the cage door closes, he’ll be throwing everything he has with the worst of intentions.

“Joey Beltran invited me to this fight,” Maldonado said. “I don’t know what his game will be, but I will give 110% in my performance and will hurt and knock out Joey Beltran. I have great respect for Joey Beltran but I enter the Octagon to get the job done and win. Certainly in this fight Beltran will confront Fabio Maldonado like no other fighter has before.

“It makes me very happy to see the love from the fans. It motivates me even more to put on a great show and leave with Fight of the Night. Fans can expect to see a great fight. I am more prepared for this bout than ever before.”

In addition to a guaranteed throw down with Beltran, another perk of the bout for Maldonado comes with it taking place in his native Brazil. The fight will be his third consecutive showing in his homeland under the UFC banner, and the thought of competing in front of his countrymen has the former boxer turned mixed martial artist pumped up.

“For me, it’s great to fight in Brazil. First, because all my fans are at the event, which motivates me a lot. Secondly, I am near my family. And lastly, because I don’t need to deal with long hours of travel.”

As the UFC draws closer to its 20th birthday, there is no doubting the physical demands of such a rigorous sport, but every fighter who puts on the gloves is signing up for the risk and reward which comes from professional competition.

Despite the battles he’s endured inside the cage, Maldonado isn’t concerned with things which could arise in the future. In his mind, the hurt business is one he’s invested himself in entirely, and he’ll take everything that comes with the pursuit of glory.

“I don’t see this as a downside. I am an athlete and prepare myself for this. As for stopping, I still plan on fighting MMA for many more years. I know that some of my past fights have been tough, but I have a team accompanying which me has prepared me for them.”