Makwan Amirkhani Preps for His Encore 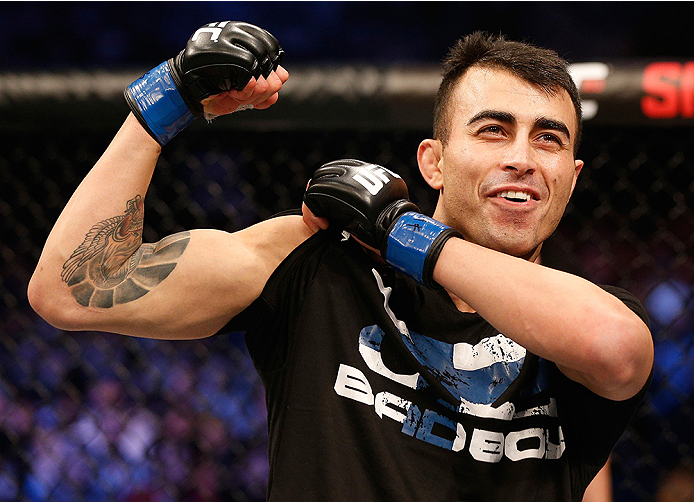 If an eight-second finish of Andy Ogle in his UFC debut didn’t get fight fans on the Makwan Amirkhani bandwagon, just listening to him talk about his life in and out of the Octagon should do the trick. Because it’s impossible to not like someone who answers the phone with the greeting “Hello, this is Mr. Finland.”

Yet the funny thing about the 26-year-old, who was born in Kurdistan, raised in Finland, and now trains in Sweden, is that what may show up as brash in ink – real or cyber – comes from a soft-spoken young man who has the ability to throw in verbal gems and jabs within a sentence that has nothing to do with what most would term “trash talk.”

That’s a gift, and one that is likely to make him a big star if he keeps putting together results like he did against Ogle in January. That fight was over almost as soon as it began, starting with a flying knee at the bell and ending seconds later with ground strikes, earning Amirkhani his 11th pro win and his first UFC Performance of the Night bonus. This Saturday, when he makes his second UFC start against Masio Fullen in Berlin, he plans on delivering more fireworks.

“I have a surprise that makes (UFC President) Dana White give me another bonus,” he said.

“Probably,” he deadpans. “That’s not impossible.”

At this point, what is for a young man with the world at his feet? Yet as bold as the previous proclamation may be, then he talks about what he would do with the $50,000 bonus, explaining that his mother hasn’t seen her brother and sister for several years, thus his desire to bring them to Finland for a reunion.

This dichotomy makes Amirkhani one of the sport’s most interesting characters, and while the rest of the fight world eagerly awaits his next move, that wasn’t always the case when he was coming up the ranks and seen as nothing but a wrestler taking up space in the gym.

“I don’t care what people say,” he said. “I love a challenge, and that was one of the biggest challenges of my life, when somebody said to me that I’m just nobody and they didn’t care about me. Now, things have changed. My phone and my Facebook and Instagram is ringing all the time. People want to do interviews and stuff and I don’t complain. I like it and it’s fun. But sometimes I forget that this is really happening. When I watch the pictures from Stockholm, I can’t believe that they were all there with me. Meeting Bruce Buffer and Burt Watson, everything became real. When I meet people, they know who Mr. Finland or Makwan Amirkhani is. I always introduce myself and say ‘hey, I’m Makwan.’ And they say ‘I know who you are.’ I’m not so used to that and I’m still a humble guy, so that’s a good thing.”

Fame sits well with Amirkhani though. In just a few months, he went from relative unknown to hot UFC prospect, and he’s comfortable in the spotlight’s glare. His notoriety has even gone far beyond Europe.

“It’s huge,” he said when asked how his success has been received in Kurdistan. “My mom’s sister and everybody are asking, even though they don’t know much about me. Kids, when they grow up, they always want a role model, especially one from their own country, someone they have actually seen and they keep the idea that it’s possible to succeed in life. So it’s nice that the Kurds, all the young people, have their own role model from their country. I like to be in that position and I don’t want to let them down.”

To make sure that doesn’t happen Amirkhani is doing his part in the gym, with his full-time move to the renowned Allstars Training Center in Stockholm paying dividends already.

“I’ve learned a lot of new techniques in my grappling, my wrestling, my striking,” he said. “Everything is much better. I’m more dangerous and powerful, faster, more handsome because I’m hanging out with my friends in Sweden, and it’s like normal for them to always look good, so I have to keep up with that.”

He doesn’t skip a beat, and if he’s feeling the heat to perform on Saturday, you wouldn’t know it.

“I don’t get the pressure from my fights,” Amirkhani said. “The pressure I get is that I’m so excited to show the people how good I actually am in this game. Before Stockholm, I trained hard and I was like ‘let’s see how good I actually am.’ It was the first time I didn’t just go in with a couple YouTube clips and do my basic wrestling. Now I train for three months with top-level guys at AllStars so I’m excited about that.”

Amirkhani is even more excited to send a message to Mexico’s Fullen, who he believes has made this fight personal.

“I have been respectful,” he said. “Of course, I say things that are facts – I’m better than that guy and I always remind him and remind everybody that I’m much better and this will end in a short time. But this video that he did, saying “See you in Berlin, bitch,” that was something that made me want to make him feel like a train just ran over him.”