“If Tim is my date, then my gift to him will be to hand him a loss.” - Zach Makovsky 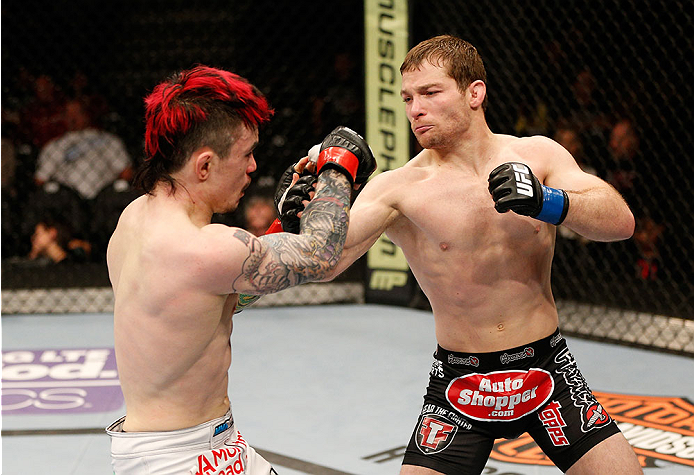 After suffering a unanimous decision loss in his fight against the veteran Jussier Formiga last summer, Zach “Fun Size” Makovsky found himself out of the contender conversation as quickly as he entered it.

Winning his first two UFC fights, including making easy work of perennial contender Scott Jorgensen, the mixed martial arts veteran proved he could be one of the elite in the UFC flyweight division.
Instead, he finds himself in rebuilding mode when he faces Timothy Elliott at UFC Fight Night: Henderson vs Thatch in Broomfield, Colorado on Valentine’s Day this weekend.

But recent events at 125 pounds have been a cause for optimism for the Philadelphia-based fighter.
“The division is a bit in flux right now, especially with John Lineker going up a weight class,” he said.
Lineker would likely have been the rightful number one contender had the Brazilian made weight at UFC 183. Instead, he is forced to move up to bantamweight.

“He beat Ian McCall but he has to go up so it eliminates who the next contender would be. I think maybe an ultra-impressive performance will help me to stand out. I lost my last fight to Formiga, but he pulled out of his last fight, so it’s safe to say that anything can happen in this division. I just need to win this fight and take it from there.”

For Makovsky, winning means sacrifice, which includes a lot of travel for this camp, as he makes his way up the East Coast and even into Canada to train with some of the sport’s best coaches and fighters.

“It’s going really well,” he said. “I’m feeling good and I’m ready to go. I spent two weeks at Tristar Gym in Montreal, and I’m in New York City every day with Marcelo Garcia for Jiu-Jitsu and Phil Nurse for Muay Thai. I’m from Philadelphia and I train as much as I can there, but I like to seek out instructors who share my passion and also my philosophy in fighting. I started training with Nurse and Garcia a few years ago and I go up to New York City at least twice a week to train with those guys, and I think Tristar is the best MMA camp out there right now. To be able to work with Firas Zahabi and the incredible fight team of theirs is a privilege and an honor.”

Makovsky is more cerebral than brutal in his approach to the fight game. He is soft spoken at all times, and almost sounds like Joseph Benavidez when he discusses honing his craft.

“I’m always looking to broaden my horizons, and I’m in good hands with who I am working with,” he said. “I’m a technically-minded fighter. I want to always have a reason for the moves I’m going to execute; not just go out and do random things to see what works. And everyone I work with is thoughtful like that. Marcelo has a wrestling-ish Jiu-Jitsu style that works well for me. He’s very explosive and we also have similar body styles, so a lot of what he does is successful to me too. And both Phil Nurse and Firas Zahabi are quite strategic in their approach to training. Everything has a purpose. Nobody’s training for the sake of training. Every move has a motive.”

And speaking of Benavidez, the Team Alpha Male veteran submitted Elliott by mounted guillotine choke last April, making it two losses in a row for the Missouri fighter. But don’t think Makovsky is expecting a cake walk.

“It’s never an easy fight against Tim Elliott,” he said. “He’s very aggressive and his style is chaotic, and that’s what makes him dangerous, but it is also what makes him vulnerable. When you’re fighting with Tim you have to be ready to go to places you may not have seen before. He’s great in scrambles. He might not be the most technical fighter but his chaos is a technique of its own if you don’t prepare for it. His wrestling is very good but he doesn’t have much control. He thrives in that environment and it’s up to me to break it down and limit that chaos.”

Fighting on Valentine’s Day is as good as any day for Makovsky, but he’s not going to be handing Elliott a box of chocolates as he enters the Octagon.

“I didn’t expect my Valentine’s Day date to be with Tim Elliott but anytime there’s an opportunity for a chance in the Octagon, I don’t care what date it is. My girlfriend wasn’t too happy but I think I’ll send her flowers. If Tim is my date, then my gift to him will be to hand him a loss.”