Makovsky gets chance to show championship mettle vs Benavidez 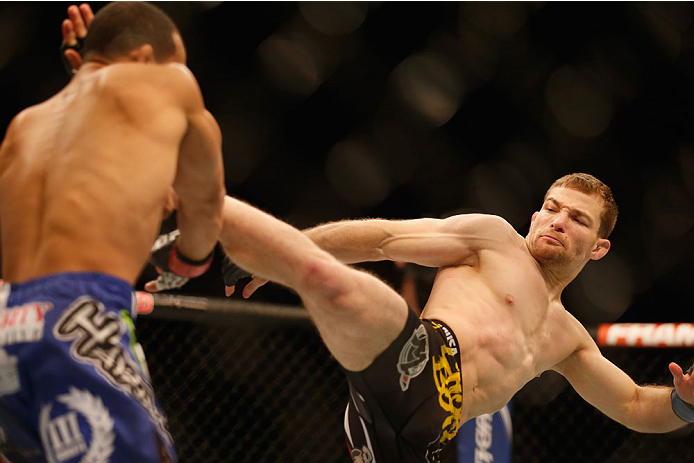 For a guy nicknamed “Fun Size,” UFC flyweight contender Zach Makovsky sure takes all the fun out of playing the “What If” game should he defeat Joseph Benavidez this Saturday in Las Vegas.

“Unfortunately, I don’t think it works out too well if you do that,” he laughs, affably taking the joke in stride while accurately explaining that without a win over the two-time title challenger, he can’t talk about potentially fighting for the championship himself later this year.

“It’s definitely in the back of my mind and that’s what I’m working to ultimately, but I’m not gonna get there without going through Benavidez,” Makovsky said. “And he’s definitely not a guy you can look past. He’s been in the top three at 135 and 125 for the last seven, eight years. He’s been elite in two weight classes and he hasn’t got to be the champion, but he’s right there with everyone. He’s probably the most dangerous guy I’ve ever fought, so there’s no way I can really look past him.”

Go inside the Benavidez/Makovsky matchup

That attitude has carried the Philadelphia product to 19 wins over the course of a pro career that began in December of 2006. Three of those victories have come in the UFC, but it may have been a loss to John Dodson in his most recent bout at UFC 187 last May that truly announced his arrival to the flyweight title race.

And even though he dropped a decision to “The Magician,” the fight was close enough that there were some who thought Makovsky deserved the nod.

“Dodson’s a good fighter – he’s fast and super powerful – but I really feel like I was the more effective guy,” Makovsky said. “It was hard to open up and be more offensive because that’s when his power can come into play. So I really had to be careful, and I think that maybe I didn’t do enough. But I still think I was the more effective fighter, and I landed the cleaner shots, and overall controlled the fight more. I think I won, but it was a close fight.”

“I want to fight the best guys I can while I’m in the UFC and try to make a run at the title,” -- Zach Makovsky

Close enough that the UFC put him right back into a marquee matchup against the No. 1-ranked Benavidez, a fighter who could be seen as being in the flyweight version of no man’s land. Sure, he’s won four straight and deserves to be at the top of the division, but after two losses to current champion Demetrious Johnson, it would be hard to sell a third shot at “Mighty Mouse” at the moment. It could possibly put Benavidez in a precarious spot motivation-wise, while Makovsky has every reason to be motivated for this bout.

“He’s in a tough spot because he’s fought twice (for the title) and lost twice and the last one he lost convincingly,” Makovsky said of his opponent. “And the division needs some new people to poke through to the top tier. (Henry) Cejudo just beat (Jussier) Formiga, and it’s definitely motivating because I know it’s just that one more step. That’s why I was asking for this fight with Benavidez. He was one of the guys I requested if he needed an opponent, and he’s kind of cleared out the rest of the division below him too. It would be a good win for me and a step to the title shot. I think it’s the perfect fight and the one I wanted.”

And one he’s been fighting nearly a decade to get, even if he still might be the “new guy” to UFC fans who are still getting to know him after his Octagon debut in December of 2013. And while he admits that such a perception of him is “definitely a little bit different,” what matters is getting the big fights and capitalizing on them. He wasn’t able to do that last May, but Saturday’s another shot.

“I want to fight the best guys I can while I’m in the UFC and try to make a run at the title,” he said. “I’m not that young and I’ve got a good amount of experience. I’ve been fighting professionally for almost 10 years now, so I feel like I’m ready for the top guys in the division and now I get Benavidez, which is a matchup I’ve always liked. There’s not as much time to prepare for it as I would prefer, but it’s definitely one of the fights I’ve wanted, so I jumped on it.”

Makovsky is no old man at 32. In fact, he may be entering his physical prime. If that’s the case, he has to make it work now, and that’s the plan, to beat Benavidez, throw his name in the hat for a shot at the belt and capitalize. And 2016 is the year.

“That’s the goal,” he said. “But to get that call, I’m gonna have to beat Benavidez. I agree that Demetrious has cleaned most of the division out, and they need someone else to poke through the top tier of the division, and this is a fight that can definitely do it.”