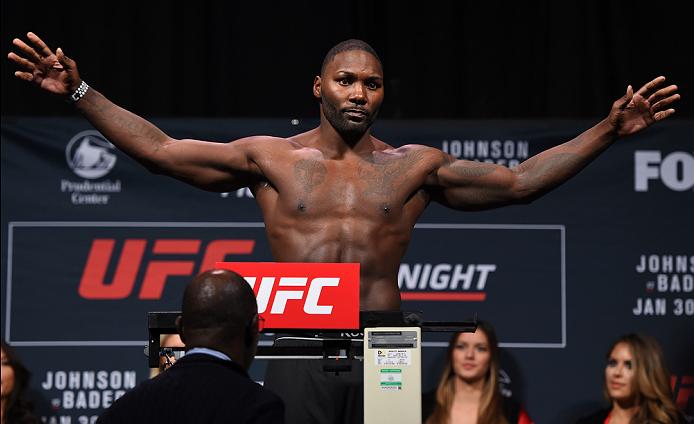 It only took 13 seconds to know that Anthony Johnson was going to be a special fighter in the UFC. That was 35 pounds and nearly a decade ago, as the Georgia native dispatched Chad Reiner in a welterweight bout in Hollywood, Florida on June 12, 2007.

But his family knew a bit sooner.

“I used to beat up my cousin’s teddy bear all the time,” Johnson laughed during a 2012 interview. “And teddy bears don’t punch back, but I was throwing that thing all around the house and doing some WWE-type stuff. I was body slamming it, jumping on top of it, punching it. I guess I was in training at a young age. So it doesn’t surprise them. I’m just that little kid that they saw growing up who’s on TV now and doing it for real.”

“Rumble” has always been humble. When you’ve got the ability to turn out an opponent’s lights with one punch, you don’t need to brag. Yet even before he soared to the top of the light heavyweight division, where he currently sits as the No. 1 contender heading into his UFC 202 co-main event bout against Glover Teixeira, Johnson wasn’t one to trash talk or draw attention to himself. That attitude likely came from the grandparents who raised him in Dublin…Georgia, not Ireland.

"I was raised on a small farm, so I had plenty of open land to run around in,” he told me in 2008, shortly before another blistering knockout, a 51-second finish of Tommy Speer. By then, Johnson may have only been 4-1 as a pro and 1-1 in the UFC, but the word was out on the former junior college national wrestling champion with the heavy hands and the no nonsense demeanor. His grandmother didn’t care about the knockouts, but the demeanor.

“She watches it on TV,” Johnson said before the Speer fight. “She don’t know what’s going on but she watches it to see if I’m gonna come up. (Laughs) As long as I’m happy and not in any trouble, they fully support me.”

There would be ups and downs and growing pains for Johnson, both in and out of the Octagon, but some things remained constant as he moved from welterweight to light heavyweight and dealt with personal issues, as well as a six-fight stint outside of the UFC. One was his power. That never left him, a fact evidenced by his last four wins over Rogerio Nogueira, Alexander Gustafsson, Jimi Manuwa and Ryan Bader coming by knockout.

Another was his admiration for his peers.

“I respect every fighter and I respect every man that is willing to get in that cage and basically lay his life on the line,” he said back in 2008, and that hasn’t changed.

The other constant? He’s a winner, and there’s nothing that feels better than that for the 32-year-old, who doesn’t look back, only forward.

“Sitting on the sidelines made me realize that you’ve got one life to live and you’ve got to go and do the very best that you can and don’t take no for an answer,” Johnson said in 2011. “Don’t worry about the past, only focus on the present and the future.”