The rematch is on for UFC 147 on June 23rd, and Rich Franklin is ready for Wanderlei Silva. If you ever had any doubts of that fact, check out the former middleweight champ's defining moments... 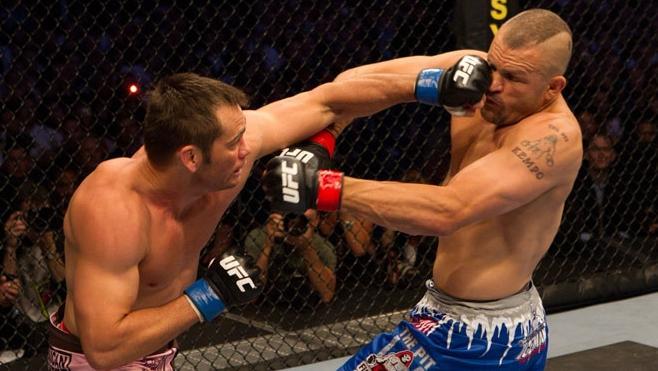 On June 23, former UFC middleweight champion Rich “Ace” Franklin returns to the Octagon to face off in a rematch with “The Axe Murderer,” Wanderlei Silva. Before this clash of UFC superstars commences though, we’ll take at look at the defining MMA moments of the fighting pride of Cincinnati, Ohio.

The Evan Tanner series
April 25, 2003 - UFC 42 - Result - Franklin TKO1
June 4, 2005 – UFC 53 - Result – Franklin TKO4
Lumped together as one moment in Franklin’s career, his two fights with Tanner were totally different, not only in how the same TKO result was achieved, but in what career stage Franklin was in at the time.

In their first bout, Franklin – then a light heavyweight - was unbeaten and three years into a career that had now brought him to the UFC Octagon. And while you could tell that his complete game hadn’t yet been fully developed, it was obvious from his accurate striking that he was on his way to the top. This accuracy kept Tanner off balance and left him relegated to lunging knees from long range and sloppy clinch attempts.  By the midway point of the round, Franklin found his rhythm, buzzed Tanner and stopped him seconds later.

Two years later, they did it again, and this time Tanner’s middleweight title was on the line.  The result was the same, but this time Franklin was forced to go four rounds and rise from a significant first round knockdown to win a fight characterized by a courageous stand from a battered and bloodied Tanner, who took a ton of punishment before the ringside physicians recommended a stoppage in round four.

Lyoto Machida
December 31, 2003 - Inoki Bom-Ba-Ye 2003
Result – Machida TKO2
Franklin, fresh off two UFC wins, took a gamble by going to Japan to face the unbeaten Machida – he lost that gamble, getting stopped in the second round.  From the opening bell, you got the impression that Franklin was in for a long night, especially when he fired off his first leg kick and got a straight left flush in the face for his trouble.  Later in the opening round, he was knocked down by Machida, with perhaps only the ropes keeping him from being stopped, and he was just one step slower than the Brazilian, who finished in the second what he started in the first with a left punch followed by a right knee that spelled the end for Franklin.  There would be no quick return to the UFC for the Cincinnati native, but when he did come back, it was as a middleweight, and he wouldn’t lose again for almost three years, spanning eight fights.

Jorge Rivera
October 22, 2004 – UFC 50
Result – Franklin WSub3
After the loss to Machida, Franklin won two bouts in local shows before being invited back to the Octagon, and when he came back, he did so as a middleweight against Rivera, who had some career rehab to do as well after an upset UFC loss to Lee Murray nine months earlier.  Well, this was one of those fights where the stock of both guys goes up regardless of the result.  Featuring good give and take and plenty of momentum shifts, the fight saw Rivera push Franklin hard throughout, stunning him with punches and knees and cutting him over his right eye while raising swelling under the left.  Franklin pushed right back, and as he pulled away in the third round, he was able to swing into an armbar from the full mount that ended the bout with just 32 seconds left.

Ken Shamrock
April 9, 2005 – The Ultimate Fighter Finale
Result – Franklin TKO1
This was the big one, the fight that moved Franklin not only from prospect to contender, but from one of the pack into the realm of UFC stardom.  Being in the main event of the first live UFC card on free cable helps out significantly, but stopping one of the game’s icons in Shamrock really pushed Franklin over the top.  And while many just look at the result and figure it was a blowout, it’s important to point out that Franklin had to escape a pretty tight ankle lock by Shamrock before coming back to win, showing that Franklin’s game was starting to evolve to include submission defense as well as accurate striking and solid standup techniques.  But most of the significance here has to do with Franklin emerging as one of the organization’s stars with one big win.

David Loiseau
March 4, 2006 – UFC 58
Result – Franklin W5
After winning the middleweight title against Tanner and defending it with a first round knockout of Nate Quarry, Franklin kept up his hectic schedule (it was his fourth fight in less than a year, a period that also saw him serve as a coach on season two of The Ultimate Fighter) with a title defense against dangerous Canadian David Loiseau.  The scores of the five rounder make the fight look like ‘The Crow’ didn’t even show up – 50-42 twice and 50-43 – but the reality of the bout is that it was a war of attrition that not only showed Loiseau’s heart (and punch, as he dropped Franklin hard in the third), but Franklin’s as well, as he fought with a broken left hand, tendon damage to his ankle, slightly torn ligaments in his right hand, and a cut over his left eye for much of the 25 minute contest.

The Anderson Silva series
October 14, 2006 - UFC 64 - Result – Silva TKO1
October 20, 2007 – UFC 77 - Result – Silva TKO2
If you’re a Rich Franklin fan, these fights were ugly.  If you’re a mixed martial arts fan with no rooting interest, these bouts show just how dynamic and devastating a fighter Silva is.  UFC color commentator Joe Rogan describes Silva’s style as a “ballet of violence”, and it’s the perfect description of what ‘The Spider’ does in the Octagon.  His first win over Franklin was shocking; not that he won, but in the manner in which he did it, dominating in the clinch before shattering Franklin’s nose with a knee and stopping him moments later.  The second one saw Franklin a little more competitive, but the result was the same and was epitomized by a flurry of punches, kicks and knees from Silva that looked seemingly effortless as he defended the crown he took from Cincinnati’s finest.  The bouts showed that all fighters are human, and that no matter how good you are, there’s someone out there who has your number.

Matt Hamill
September 6, 2008 – UFC 88
Result – Franklin TKO3
Take away the two losses to Silva, and Franklin is an impressive 4-0 with 3 TKO wins in the last two years.  And considering that he beat Jason MacDonald, Yushin Okami, Travis Lutter and Matt Hamill over that span of time makes that series of victories even more impressive.  But it was in his return to 205 pounds against Hamill last September that he showed that he still had plenty left in the tank as he finally looked like the ‘old’ Rich Franklin in dismantling his foe and stopping him in three rounds.

Wanderlei Silva
June 13, 2009 – UFC 99
Result – Franklin W3
After the Hamill bout, Frankling dropped a disputed decision to Dan Henderson in January of 2009. Eager to erase the memory of that loss, Franklin engaged in an entertaining three round scrap with “The Axe Murderer” at UFC 99 that once again re-established Franklin as not only a legit threat to anyone in the game, but as one of the organization’s most exciting warriors.

Chuck Liddell
June 10, 2010 – UFC 115
Result – Franklin KO1
The main event of UFC 115 was one of those tough fights for diehard fans to watch, mainly because it pitted two longtime fan favorites against each other, making it nearly impossible to pick just one fighter to root for. But as long as it lasted, former champions Franklin and Liddell went to war, with Franklin battling through an arm broken by a Liddell kick to ice “The Iceman” with a flush right hand late in the opening round. Can he do the same thing to Silva on June 23rd? We’ll soon find out.