Maki Pitolo Has Something To Prove

There is no doubt that “Coconut Bombz” is on the short list of best UFC fighter nicknames. And though Maki Pitolo’s tagline started out as a cool Instagram username, it quickly became associated with his stand and bang fighting style.

He brought it to Dana White’s Contender Series last summer, and now that he has a UFC fight under his belt, he is ready to live up to his nickname at UFC Auckland this weekend.

“I love the action. I always stand because I don’t like a boring fight and I don’t like to watch boring fights. I want everybody to know that we’re coming out and we’re throwing anywhere and anytime,” Pitolo said. “At the end of the day, I have to go in there and represent how I rock.”

Pitolo wasn’t able to rock like he wanted against Callan Potter in his UFC debut in October. A major reason why was that his first walk to the Octagon came in front of over 57,000 fans at Marvel Stadium, making UFC 243 the biggest event in company history when it comes to attendance.

And the nerves honestly got to the fighter out of Hawaii.

“To go from it sounding like I was just going to go spar at the Contender Series and then to going out there and getting rocked; the crowd alone rocked me and it was crazy,” Pitolo said. “The whole week leading up I was telling everyone that the crowd wasn’t going to get to me and then come fight night walking out in front of all those people it got to me.” 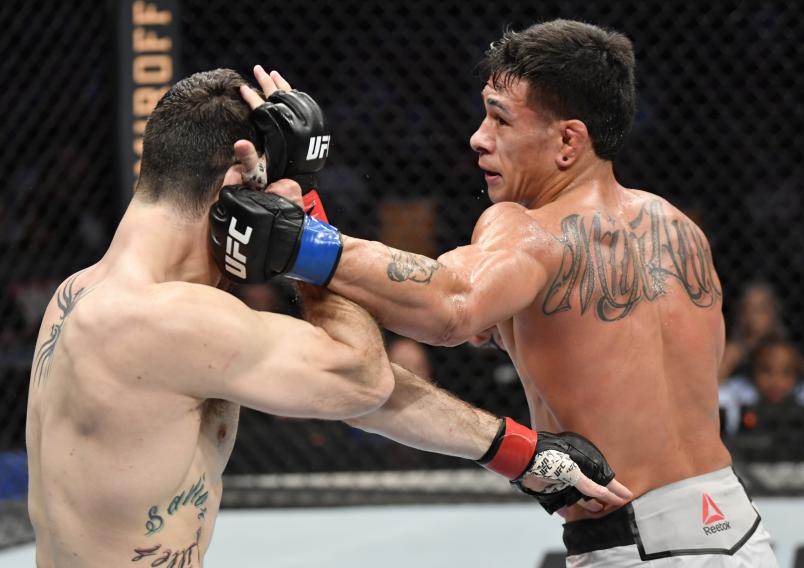 That mistake is something that Pitolo won’t let happen again. He believes that getting thrown off the deep end at such a massive event will help him defeat the nerves in the moments before that gate locks.

On Saturday, Pitolo will face Takashi Sato at Spark Arena. It is an important moment, but he isn’t feeling the pressure. He’s just focused on himself.

“I want to show that I’m an entertaining fighter and I want to get the average person off their feet cheering for me,” Pitolo said. “But that’s not going to be tough, all I have to do is be me and the rest will take care of itself. I’m focused, I’m ready and I have that Mamba mentality right now.”

One of those traits that Pitolo wants to showcase on Saturday is his ability to finish, something he has been able to accomplish in nine of his twelve victories. He plans to get that number to double-digits by taking care of business against Sato.

“I want to put it all together and make my game as one, something that I’ve been doing all camp, and just look for the finish every chance that I get,” Pitolo said. “This time around I’m ready for the big show and I’m going to show everyone that I’m here for real this time.”

Make sure you catch Pitolo take on Sato, with the UFC Auckland prelims starting at 4pm/1pm ET/PT and the main card beginning at 7pm/4pm ET/PT.