The name Makhmud Muradov might not be on the lips of many Western UFC fans…yet. But in his native Uzbekistan, he might as well be Elvis.

Everywhere he goes, throngs of people seek an introduction, a handshake, a photo with their native son.

“A restaurant, the market, even the police. Everyone.”

Self-described as “Uzbek with a Czech heart,” Muradov fled the country of his native land—war torn Soviet Tajikistan--to his mother's native Uzbekistan shortly after his birth in 1990. He'd take up boxing and martial arts in his early teens and eventually became Junior Uzbek kickboxing champion before transitioning into Muay Thai and MMA. Since his first professional fight in 2012, he’s been putting together a résumé worthy of all the attention, both of his countrymen and one particular American. 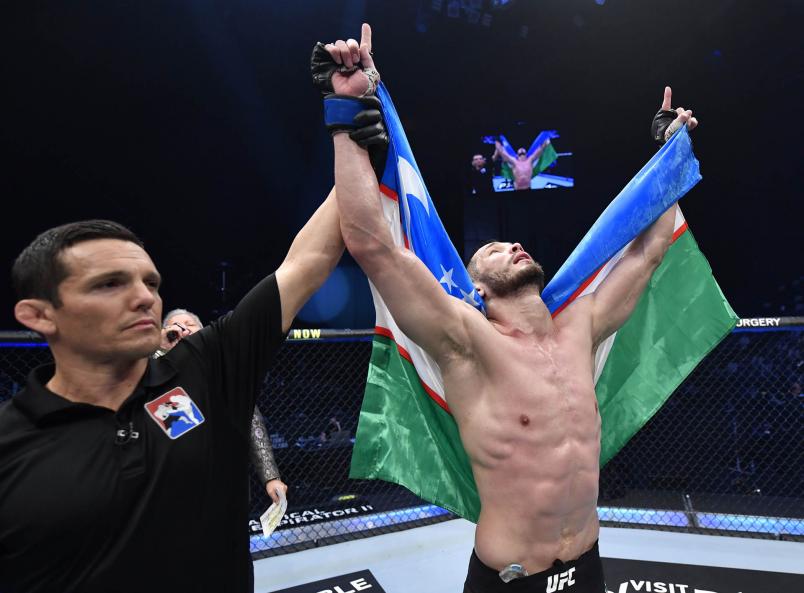 Makhmud Muradov of Uzbekistan reacts after his TKO victory over Andrew Sanchez in a middleweight fight during the UFC 257 event inside Etihad Arena on UFC Fight Island on January 23, 2021 in Abu Dhabi, UAE (Photo by Jeff Bottari/Zuffa LLC)

After meeting the one and only Floyd Mayweather Jr. at a Prague MMA event in 2017, Muradov soon became the first MMA fighter signed to Mayweather’s Money Team management.

“Good guy. He helps me, supports me every time. He just sent me a message: keep going, keep working hard.”

As they say, game recognizes game. Muradov validated Mayweather’s hunch with a string of dominant wins--the majority by KO or TKO—in promotions like XFN, NOW and Oktagon MMA before the big show came calling. Signing with the UFC in 2019, he quickly secured his first win vs Alessio Di Chirico in September of that year. He followed it with an emphatic KO victory over Trevor Smith just a couple months later, stepping in on short notice in December 2019.

Mayweather’s own understanding of the fight game has made for a particularly simpatico relationship, although Muradov is quick to point out that it’s not just business.

“Not only my manager: my friend, my brother. He supports me every time.”

Despite an eagerness to keep the early momentum flowing, 2020 was one long string of setbacks for “Mach.” Injuries to opponents, pandemic travel restrictions and his own positive test for COVID-19 conspired to keep him out of action for the entirety of the year, scrapping scheduled bouts with Antonio Carlos Junior, Brad Tavares, Kevin Holland, Krystof Jotko and Karl Roberson.

He made up for that frustration in January 2021, earning a Performance of the Night bonus with his TKO victory over Andrew Sanchez at UFC 257. It was his third win in his third UFC fight, extending a 14-fight win streak that dates back to 2017. 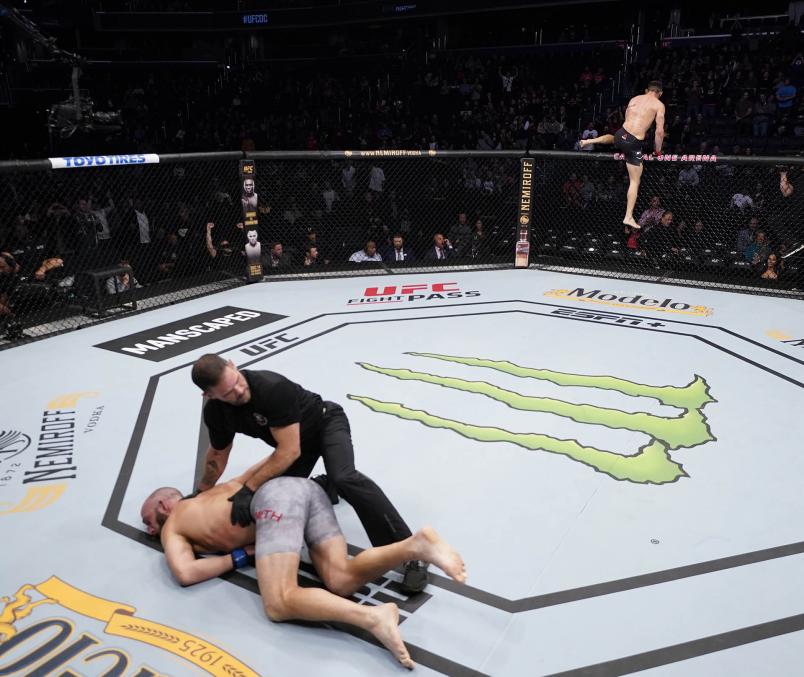 Makhmud Muradov of Uzbekistan celebrates his victory over Trevor Smith in their middleweight bout during the UFC Fight Night event at Capital One Arena on December 07, 2019 in Washington, DC. (Photo by Jeff Bottari/Zuffa LLC)

Following the big win, he openly expressed a desire for a full camp before his next fight. He got his wish and carries some pretty intense preparation into his Saturday meeting with Gerald Meerschaert at UFC Fight Night: Barboza vs. Chikadze.

The training went international, with extended stops in the three countries nearest and dearest to his heart. There was strength and conditioning in Uzbekistan, striking and tactical work in the Czech Republic and hard sparring in Poland. He laughs to himself at the mention of the latter.

“In Poland, nothing is easy.”

High-level partners from every possible discipline tested Muradov for a grueling six-week run designed to boost his confidence in any area a fight might go. Talking to the relaxed and smiling welterweight at the UFC APEX, it sounds like it worked.

It doesn't matter where you go, it doesn't matter what is the main thing with whom ☝🏻Always surround yourself with people who believe in you and your dreams. Nothing is impossible! Alhamdulillah for all that I have!
Thank you all very much for being around ✊🏻 #legacy pic.twitter.com/Ek3D7u05da

“I feel good. I prepared very hard. I’m ready for everything.”

Does that beautiful 14-fight streak apply any pressure that leads to such extended preparation? Muradov scoffs at the suggestion.

“No, no. Why pressure? Nothing.” He shrugs. “I know I’m prepared. One hundred percent, I’m ready.”

In his path now is the perennially dangerous Meerschaert. He gives respect but doesn’t sound concerned.

“Gerald is good guy, humble guy. I see interviews before fights, after fights. He’s a good guy. Good jiu-jitsu and grappling. It’s a good test for me, for my career. And you watch: I win. I come here to Vegas for my win, the next step in my goal.”

You might have guessed what that goal is already.

It’s evident he believes his own words, and why shouldn’t he? He has firsthand experience in dreams becoming reality.

“I’m from a small city. I come to Prague, I have nothing, I don’t speak English, I don’t speak Czech…now I have everything! My friends, my family and my country are proud for me. First UFC fighter [to represent his country], it’s history!

He mentions Mayweather again and how he plans to visit his manager’s new Miami home following his fight.

“Twenty years before I sit there watching him on TV. Now it’s my friend, my manager,” he says, noting that even now it sometimes doesn’t feel real. “Ten or fifteen years ago, it seemed impossible. Now I’m fighting in the UFC and Floyd is my manager. It’s my dream. I’m living my dream.”