Makdessi Puts His Confidence in the Process of Development

"I can promise one thing: Every time I fight I always try my hardest to
be one of the most exciting fighters anyone has ever watched." - John Makdessi 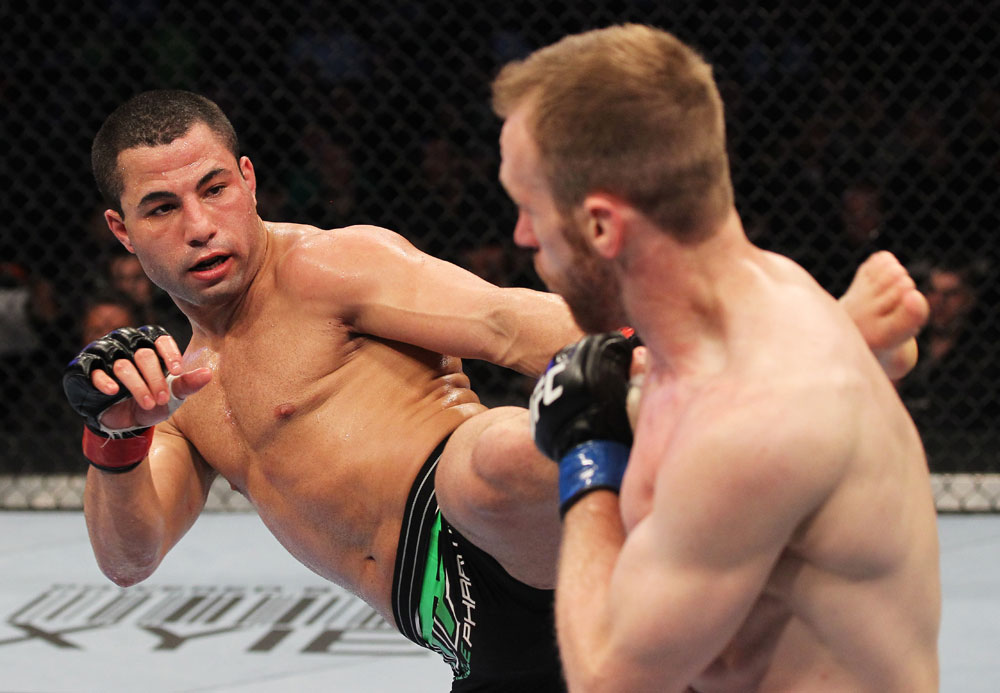 Tests come fast and furious on the sport’s biggest stage, and for Nova Scotia native John Makdessi, every step inside the Octagon is a learning experience. Based out of the Tristar gym in Montreal, Makdessi is only four years into his young career, but he has garnered acclaim for the exciting and powerful striking style he has showcased in during his short time in the UFC.

“The Bull” came out of the gates with a head full of steam as he defeated Pat Audinwood in his organizational debut and then scored a highlight reel knockout via spinning backfist at the expense of TUF alum Kyle Watson at UFC 129.  Bolstered by his early successes, the Shotokan karate standout was gaining momentum in the lightweight division, but in his two most recent outings against Dennis Hallman and Anthony Njokuani, Makdessi experienced the flip side of the coin as he suffered the first two losses of his career.

Setbacks are something every fighter faces at one time or another and the 27 year-old is determined to use those lessons to improve in every way possible.

“For me, fighting is everything,” Makdessi said. “I’ve been doing martial arts all of my life. It’s a blessing to be able to go out there and perform or showcase your skills. I’m always evolving. I always respect all my opponents. If you never make mistakes in training or fighting then you are never challenging yourself. It’s the same way in life. Fighting is fighting and I don’t look back. I try to go out there and be the best mixed martial artist I can be. I can’t really focus on the outcome. For me it is about becoming one of the best fighters in the world.  Everyone has those setbacks and I believe without losing you can never truly know what it feels like to win.

“This is my life and I’m 100% committed to this sport. I always want to do my best. Being victorious feels great but my main goal is to focus on the process rather than the outcome.”

While Makdessi has always been able to rely on his striking, his past two performances found him unable to capitalize on his aggressive attacking style. The losses forced Makdessi and head coach Firas Zahabi to closely examine the issues which were arising on fight night. After countless hours of work inside the gym, they realized several adjustments needed to be made. Makdessi believes he has found the answer to what has been plaguing him and is confident the results will show when he steps into the Octagon against savvy veteran Sam Stout at UFC 154 in Montreal, Quebec, Canada.

“Training has been going very well and for this camp we changed things up a bit,” Makdessi explained. “I changed my attitude, and through all the trial and error, I feel more mature in my training. Firas is an amazing coach and mentor. He is also a very smart man. Instead of always trying to train harder, I’ve realized it’s more about training smarter. I don’t over-train now. That was one of my biggest obstacles. I want to be fresh for the fight. I want to be hungry in the cage on fight night so I can perform my best. It’s all about saving my energy for the fight.

“Sam is a very good fighter but a fight is a fight. Hopefully every person who steps into the cage brings their A game and on that night when he fight, I’m hoping we can give each other the best of our abilities and the best man will walk out victorious that night.”

As he continues to develop his skill set, Makdessi chooses to focus on the process of growth rather than the desired results. He is confident the victories will come inside of the cage if the work is done correctly in the preparation stages of training camp. Working everyday alongside pound-for-pound great Georges St-Pierre and quickly rising star Rory MacDonald helps push Makdessi to reach the levels he knows are obtainable.

Being only 11 bouts into his career, the Canadian-born fighter understands and accepts that the experience gap between himself and the opposition will most likely be vast. It is a challenge he has embraced. While opponents continue to focus on his striking, Makdessi is busy sharpening other skills, continuing his growth and development as a complete mixed martial artist.

“I’m always motivated and I train hard every day,” Makdessi said. “I don’t need a fight to become motivated. My biggest goal is that I know I still haven’t reached my full potential and that’s the scary part. I’m still learning new things every day. A lot of people don’t understand that. They know I have a Tae Kwon Do background because I have been doing that since I was five years old. I still haven’t performed up to my full potential and I still haven’t been able to showcase my wrestling or my ground game. I hope people underestimate me because I have been training very hard in all disciplines. I have all the disciplines under my belt and I’m a diverse fighter. My opponent doesn’t know what kind of kick or punch I’m going to throw. At the end of the day it is all a mental game and I’m going to make sure my mind is 100% on fight night.

“I can promise one thing: Every time I fight I always try my hardest to be one of the most exciting fighters anyone has ever watched.”