Alex Pereira: “This Has All Been Planned”

In Only His Third Walk To The Octagon, Pereira Takes On No. 4 Contender Sean Strickland In The Featured Bout At UFC 276: Adesanya vs Cannonier
By Kevin Schuster, @KevinESchuster On Twitter • Jun. 30, 2022

Until the last two years, which saw Michael Chandler and newly-crowned light heavyweight champion Jiri Prochazka fight for a UFC title three fights or less into their UFC careers, rarely did fighters surge to the top of their division so quickly.

Alex Pereira, the former Glory kickboxing middleweight and light heavyweight champion, began his mixed martial arts career in 2015. After losing his professional debut, Pereira has only competed in five more MMA bouts in the seven years since, albeit defeating all five opponents.

Joining UFC in 2021, Pereira jumped onto the scene by landing a highlight reel flying knee to defeat Andreas Michailidis at Madison Square Garden in his promotional debut at UFC 268. Four months later, Pereira remained perfect inside the Octagon defeating Bruno Silva. Six fights into his MMA career, Pereira was still adapting on the fly.

“With each fight comes improvement,” Pereira said. “In the fight against Silva, I was able to learn a bit more and to deal with fighting for three five-minute rounds for the first time. Also, defending takedowns at some moments in a fighting situation because I had only done it in training.”

Traditionally, a UFC fighter would have a couple more bouts against unranked opponents before challenging Top 15 or Top 10 caliber athletes. But Pereira believes his skills at this moment are good enough to compete with the very best and he isn’t wasting any time to prove he can challenge UFC’s elite middleweights.

“I feel fine,” Pereira said. “Because unlike many athletes who fight their way into the minor leagues to get into the UFC, I came in as a champion from another event, so it helped me getting here and not feeling any pressure and not letting it disturb me during my fights. It makes a lot of difference.”

On July 2, Pereira steps in the cage against Sean Strickland, the current No. 4 contender in the UFC middleweight division. Strickland will be the last Top 5 opponent after UFC 276’s main event foe – Jared Cannonier - that middleweight champion Israel Adesanya has yet to face, so by beating Strickland, Pereira hopes to take his place as next in line for a title shot.

“I knew my path to the title shot would be faster than usual because everyone wants to see [me fight Adesanya],” Pereira said. “It’s in everyone’s interest, in the interest of the organization, and I want to be a champion. With my will, my insistence and everything that’s been happening, all leads to this [fight] happening. So, I knew it would be fast, maybe not this fast, but this has all been planned. We had an idea that it would be fast.”

Pereira fought the current champion twice during their kickboxing careers. Defeating “The Last Stylebender” in both bouts, Pereira welcomes the challenge of an MMA fight against his former foe.

Believing he’ll earn a title shot and a potential third fight against Adesanya, Pereira understands how important it is not to look past his current opponent. Strickland has won six straight inside the Octagon, with wins over Jack Hermansson and Uriah Hall.

Although both fighters prioritize striking, the way they use it is quite different. Strickland’s effective volume striking and non-stop pace wears opponents down round-by-round until he can overwhelm them, often dominating opponents to a decision.

Pereira’s style is quite simple: land and shut the lights out. He has amassed over 20 knockouts in his kickboxing career and has finished four of his six MMA opponents.

“From what I’ve seen, he’s a guy who moves forward the whole time, putting pressure,” Pereira said. “That’s good to me, because the more strikes he attempts, the more he’s exposed.”

“I see three things happening: maybe he’ll just stay put and throw punches only when he feels comfortable; maybe, if he’s not comfortable, he might try and take me down; and maybe he’ll see what happens when he tries to take me down and realizes it’s more uncomfortable than to exchange strikes with me.”

At home, Pereira doesn’t watch hours of film on his opponents or regularly watch MMA in his free time. Constantly evolving himself, he doesn’t see the benefit of watching old footage of a fighter who may have developed an entirely new skill set from when they first started the sport.

“I like to watch mainly his three last fights or so,” Pereira said. “If we go much earlier, maybe we notice something that the guy doesn’t do anymore, because he evolves as well. I like to pay attention to a few details, such as how he moves around the Octagon, the movements of the fight as a whole; what he did that got him tired, what made him more resistant.” 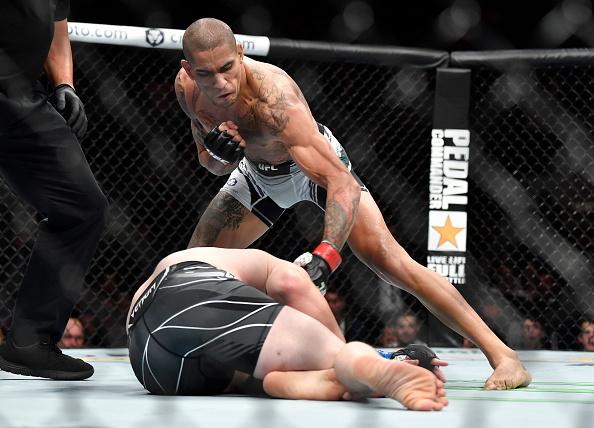 When competing in one specific discipline for nearly seven years, there isn’t much time to develop the skills to compete at an elite level in MMA. Strickland, for one, sees a clear path to victory if he utilizes his wrestling, and feels Pereira’s only fighting him because Strickland has a striking-dominant style.

“I believe that I am a more well-rounded guy coming into this fight,” Pereira said. “Of course, I have some flaws, but I’ve been working on them daily with Glover and the whole team. I feel great.

“We’ve been doing a good job. I’ve been working really hard. Some people train since their childhood, and to me this is new, but not as new as some people think. I had not started grappling when I started training with Glover; I was doing that before already. Of course, I was not prioritizing it, since I was a kickboxing champion, but I never left MMA behind. I think people tend to forget it.”