Main Card bouts all go the distance in Long Island 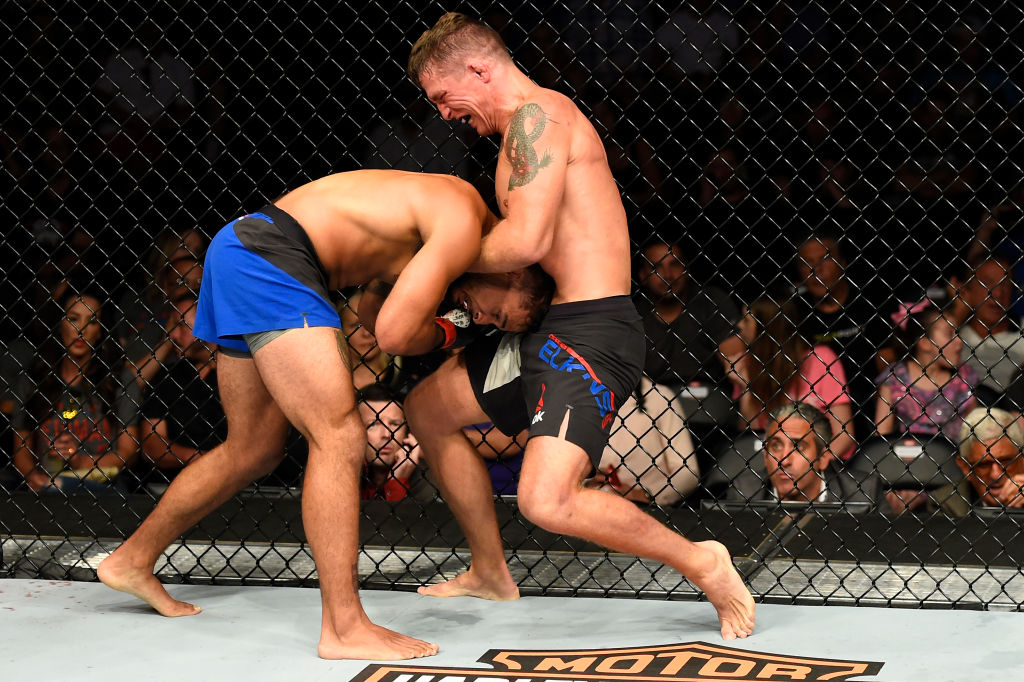 Darren Elkins</a> attempts to submit <a href='../fighter/Dennis-Bermudez'>Dennis Bermudez</a> in their featherweight bout during the <a href='../event/UFC-Silva-vs-Irvin'>UFC Fight Night </a>event inside the Nassau Veterans Memorial Coliseum on July 22, 2017 in Uniondale, New York. (Photo by Josh Hedges/Zuffa LLC)" align="center" />

Gritty featherweight contender Darren Elkins made it five wins in a row in the UFC Fight Night co-main event at Nassau Coliseum on Saturday night, as he pounded out a three-round split decision over Long Island’s own Dennis Bermudez.

The No. 10-ranked Bermudez (17-7) had success in the opening stages of the fight by shooting in with strikes and getting out before Elkins could respond, but a couple costly misses allowed Elkins to get the fight to the mat and do his best work of the round. Add in another takedown late in the frame, and it was a solid round for “The Damage.”

Lindenhurst’s Bermudez evened things up in round two with a grinding attack the included quick strikes, clinch work and a takedown, but Elkins did get a takedown of his own at the end of the frame that reminded “The Menace” that he was still around heading into round three.

The third was tough to call until the final minute, when Bermudez’s strikes cut Elkins and seemingly allowed him to pull ahead in the ultra-competitive featherweight scrap, but the early work by the Indiana native was enough to garner him the win, which lifts his record to 24-5. 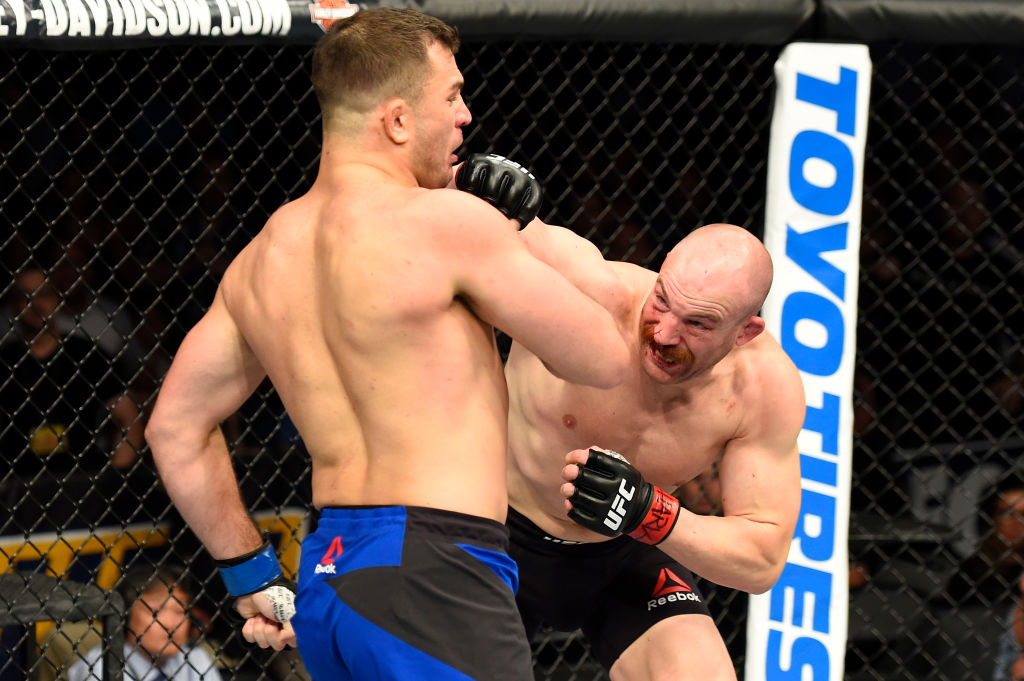 There was no shortage of heart showed by light heavyweight contender Patrick Cummins in his bout with Bellmore’s Gian Villante, and it was that heart that allowed him to make a late surge to eke out a split decision over the hometown favorite.

Villante controlled the early action, as he defended takedowns and made Cummins pay for the misses with hard punches, a couple of which rattled the former Penn State wrestler. Soon, Cummins was bleeding on the forehead after a clash of heads that produced a brief halt to the action, and things didn’t look good for him, even though he kept pressing forward, looking for a takedown.

Cummins worked his way back into the fight in round two, as he was the busier fighter while Villante tired, but with the crowd cheering him on, Villante got a second wind in round three, and he began to punish Cummins with flush shots that began closing his opponent’s right eye. Cummins was as game as they come, though, and he jarred Villante with right hands with under two minutes to go. A clinch followed, but referee John McCarthy restarted the stalled action in the final minute, leading to one last exchange before the end of the grueling battle.

With his 20th consecutive win, Jimmie Rivera made a strong case for a bantamweight title shot as he won a three-round unanimous decision over Brazilian banger Thomas Almeida.

New Jersey’s Rivera wasn’t the slightest bit intimidated by the prospect of trading blows with one of the biggest punchers in the division, and in fact, it was Rivera who struck first, knocking Almeida down with 3:10 remaining in the first round. Sao Paulo’s Almeida rose and locked up with Rivera to clear his head, but even after breaking, Rivera was winning the exchanges, and with a little over a minute left, he scored a second knockdown.

Miss any of Fight Night Long Island? Watch it all again on Fight Pass!

By the second round, both men were bleeding from cuts over the eye, and Almeida began closing the scoring gap thanks to a flash knockdown and good takedown defense that allowed him to keep the fight standing.

Rivera stormed out of his corner for round three and slammed Almeida to the deck, completely changing the momentum of the fight. Almeida was able to get back to his feet, but Rivera made him pay with some hard knees before the two separated. Once at distance, Rivera regained control of the striking showdown, and two quick takedowns only added to his score total before a final surge from Almeida left the fans cheering at the horn.