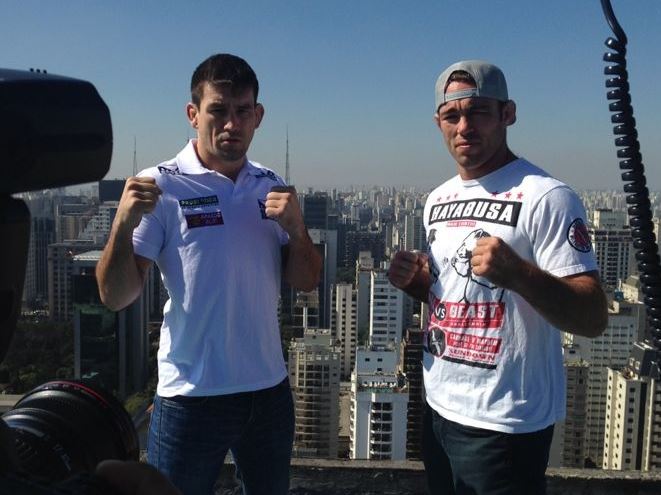 The city of Barueri welcomes its first Ultimate Fighting Championship® event on Wednesday, October 9, with UFC® FIGHT NIGHT no COMBATE: MAIA vs. SHIELDS. Tickets for the second UFC® event in São Paulo go on sale at 10 a.m. BRT tomorrow, Wednesday, August 21, at www.ticketsforfun.com.br. The main card is set to start at 8 p.m., with the first bout scheduled to begin at 4.30 p.m. Doors will be open to the public at 3:30 pm. The event will air live on FOX Sports 1 in the US.

In the main event of the evening, No.4 ranked welterweight contender and former challenger to the middleweight title Demian Maia (18-4-0 in mixed martial arts), takes on former Strikeforce champion Jake Shields (28-6-1, 1NC). Undefeated in the 170 lbs. division, Maia will fight in his home state for the first time since joining the UFC.

“I am very happy and proud to be the main event,” said Maia. “I’ve always wanted to fight for the UFC in São Paulo, were I was born and raised. I have a special connection with the Jose Correa arena in Barueri, where I had my first major MMA milestone in 2006. My big goal is to get a title shot and become world champion. I know Jake Shields is a great opponent, with wins over names such as Dan Henderson and Carlos Condit, and beating him is sure to get me within title contention.”

“The Brazilian audience is intimidating and enthusiastic, and it makes for an excellent atmosphere,” said Jake Shields. “But once I get in the Octagon, I’ll be focused and ready. Fighting Demian on his home turf will not be an issue. His strengths are obvious: he’s the best Brazilian jiu-jitsu martial artist in my division. His weakness is his standup. I want to beat him at what he’s best at.”

In the co-main event of the evening, welterweight prospect Erick Silva (15-3, 1NC) looks for his fourth UFC win, against south-Korean Dong Hyun Kim (17-2-1, 1NC). Coming off an impressive win that earned him Sub of the Night honors in Fortaleza, Silva looks to establish himself as one of the top prospects in the division against the dangerous judo black belt.

“The UFC is happy to bring yet another great card, with top Brazilian and international talent, to its sixth Brazilian city,² said Marshall Zelaznik, UFC Managing Director of International Development. ³In addition to São Paulo native Demian Maia, who is headlining against dangerous welterweight Jake Shields, we also have top Brazilians Erick Silva, Thiago Silva and Rony Jason, who are known to put on exciting fights. It is sure to be another unforgettable night for UFC fans in the Jose Correa arena.”

“It’s a major accomplishment for our city to be able to host such a grand event, and an opportunity to have tens of countries with their eyes on Barueri. We’re doing everything we can to make UFC® FIGHT NIGHT no COMBATE: MAIA vs. SHIELDS a great sporting event for this city,” said Paulo Sérgio Nascimento, Barueri’s Secretary of Sports.

All bouts are live and subject to change.