"In no way do I think this is an easier fight, and I think it's going to be very interesting and great for the fans." - Demian Maia 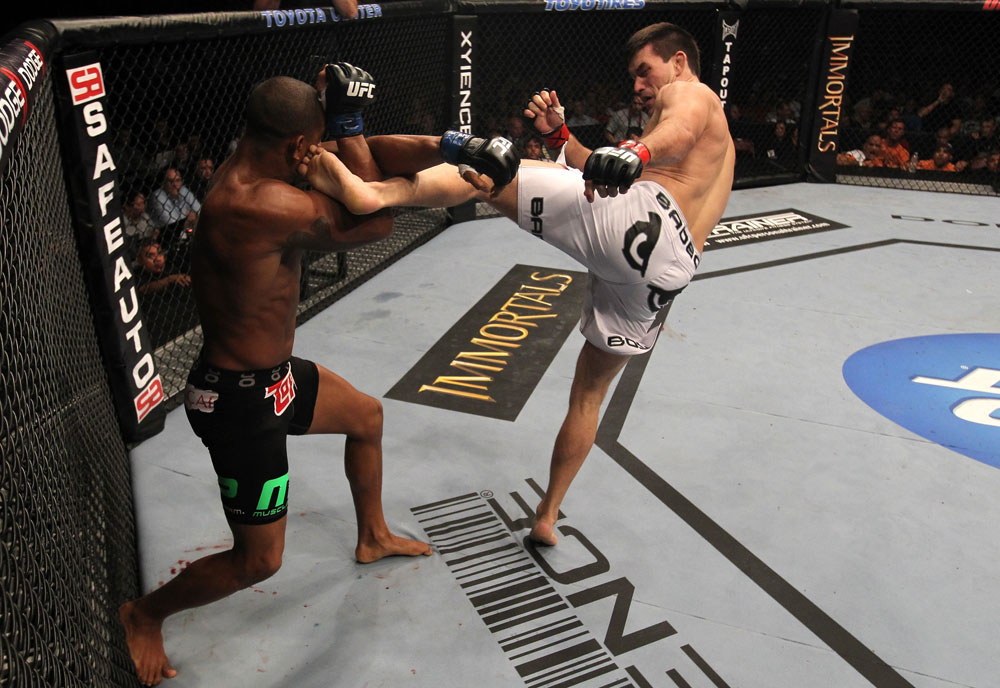 If you’re a Brazilian fight fan or someone associated with the sport, you were either in HSBC Arena in Rio de Janeiro on January 14th or you wanted to be there for UFC 142.

But not Demian Maia.

Tucked away in Sao Paulo, Maia was putting the finishing touches on his training camp, getting ready for a fight in Chicago on January 28th, and, with the exception of an autograph session in his home city, not worrying too much about what was going to happen in Rio earlier this month.

“I’m very focused and I don’t think about fighting on this or that day – just that I have a fight on the 28th and that’s it,” said Maia when asked about the event and whether he was going to attend or watch UFC 142. “I don’t even know if I’m gonna watch because normally right before my fights I don’t usually watch fights. I’m just focused on the 28th.”

So there was no worry from him about being seen with the crème de la crème of the Brazilian MMA world or disappointment about not competing on the card; he had business to take care of, and all eyes were on America, not Brazil.

“I’m very happy to fight and because I do what I love, and I know UFC is coming to Brazil more often, so sooner or later I know I’m going to be fighting here, but I’m not in a rush about that,” said Maia, whose attitude matches his fighting style. He’s not going to be reckless or wild. He will beat you with his mind before he does it with his hands or feet, and in a little over four years, he has gone from a one-dimensional jiu-jitsu player to a well-rounded mixed martial artist whose form may be unorthodox, but effective. And that’s come with a mix of work, focus, and a refreshing lack of ego.

“For me, it’s not hard because I love what I do and I love to fight,” he said. “I love boxing also, and not just jiu-jitsu, so whenever you do something that you love, it’s never hard work. Of course the training and everything is tough, but what I do I like very much and when you’re like that I think you develop very well.”

“I see some guys that are standup fighters and they’ve been doing jiu-jitsu for many years and they’re still not so good, and there are some jiu-jitsu guys that do standup for many years and they’re not so good, and the key is that they don’t like the other style,” Maia continues. “Sometimes they don’t like to train other styles and sometimes they don’t like to go from being the best at what they do to learning something else and there’s an ego involved there. If you think like a white belt, you can keep getting better. And when I decide to do something, I know that I will do it hard and I will get it.”

Winner of three of his last four, with the only loss a hard fought three round scrap with Mark Munoz that saw him actually rock “The Filipino Wrecking Machine” while the two traded blows early on, Maia has shown the ability to handle himself standing as well as on the mat. He will never be confused with a 185-pound knockout artist, but if going three rounds with Munoz and five rounds with champion Anderson Silva haven’t erased the memory of his knockout loss to Nate Marquardt back in 2009, you’re just not paying attention.

So with his ego in check, his game growing by leaps and bounds with every fight, and the outlook looking bright for the 34-year old, it was no surprise that he didn’t get rattled when his original opponent for this Saturday’s FOX bout, Michael Bisping, was pulled from the fight to replace the injured Munoz against Chael Sonnen. In comes unbeaten New Yorker Chris Weidman, and Maia is as ready for his new foe as he was for the last one.

“Chris Weidman is one of the most promising fighters in the middleweight class, with amazing wrestling credentials, and he’s also showing a lot of good and always improving Jiu-Jitsu technique,” said Maia. “Being undefeated is not easy at this level of competition and he’s shown that he is a good fighter. I respect a lot the fact that he took the fight on short notice, as this is a big card on a great platform in FOX, and it shows how much heart he has. In no way do I think this is an easier fight, and I think it's going to be very interesting and great for the fans.”

And a win on such a nationally televised platform will also do wonders for Maia’s growing profile.

“It’s a good test for me if I want to be champion one day,” said Maia, who is already reaping the benefits of the UFC’s success in his home country.

“It’s a great feeling,” he said. “After last year, when the UFC came back to Brazil again, there was a great change in the sport in Brazil. And now, people recognize us in the street, they come to talk to us everywhere, and it’s different than before. Before, maybe just other fighters and the people involved with fights knew who I was. Now everyone comes to talk and the sport is very big here.”

Not surprisingly though, he hasn’t let all the attention get to his head.

“It doesn’t change my life. I’m still the same person like everybody else.”

That doesn’t mean he wouldn’t mind making his debut as a UFC fighter in his home country with a world title on the line one day.

“That would be great.”