“I’m ready to fight for the title,” Maia, who has won five straight, said.

Maia only needed 40 seconds to get the fight to the mat, but Brown was able to get back to his feet fairly quickly. The only problem was that Maia remained locked on to his back, and midway through the round, the Brazilian dragged Brown back to the mat. This time, Maia kept him there, but the Ohio native’s defense was solid, and he made it to the end of the round.

Brown tossed away Maia’s first takedown attempt of round two, but was unable to avoid the second, and he saw Maia take his back again. And while Maia wasn’t able to finish the defensively sound Brown, he was dominating the bout heading into the final frame.

Down big on the scorecards, Brown needed to turn things around in the final round, and after avoiding a couple takedown attempts, he looked like he was about to when he scored with a punch as Maia fell back to the mat. Maia recovered fast though, and he went on to put Brown on the canvas once more. This time, Maia got his finish, locking in the rear naked choke that ended matters at 4:31 of the third frame.

Rio de Janeiro’s Thiago Santos scored the most important victory of his UFC career, knocking out veteran contender Nate Marquardt in the first round of their middleweight bout.

Aggressive from the start, Santos fired off kicks and punches at Marquardt, who eventually seemed to get into a rhythm, but with two minutes remaining, a left hand dropped the former Strikeforce champion. Marquardt survived the follow-up attack, but once standing, Santos closed the show with another barrage of shots that left referee Kevin MacDonald no choice but to halt the fight at 3:39 of the opening round.

Francisco Trinaldo and Yancy Medeiros went to war for three rounds in their lightweight bout, and when the dust cleared, it was Brasilia’s Trinaldo taking a well-earned unanimous decision to pick up his sixth consecutive win.

A competitive first round turned one-sided in the final minute, as Trinaldo’s heavy hands began to take their toll on the Hawaiian, who was rocked several times but still kept throwing, allowing him to stay in the fight.

The late round attack by Trinaldo winded the Brazilian, and he was taking deep breaths as round two commenced. Medeiros took advantage with some flush shots, but Trinaldo got his second wind in the latter half of the round. Medeiros’ chin remained sturdy though, and he rallied again in the closing minute, dropping Trinaldo hard with a right hand just before the horn.

The heated action didn’t let up in the third, and this time, it was Trinaldo back in control, as a series of left hands left Medeiros wobbly. As the round approached its midway point, Medeiros stumbled to the mat and took some ground strikes before he rose to his feet, Twice more Medeiros fell to the mat, but the second time he found his way to the top position, where he remained until fight’s end. 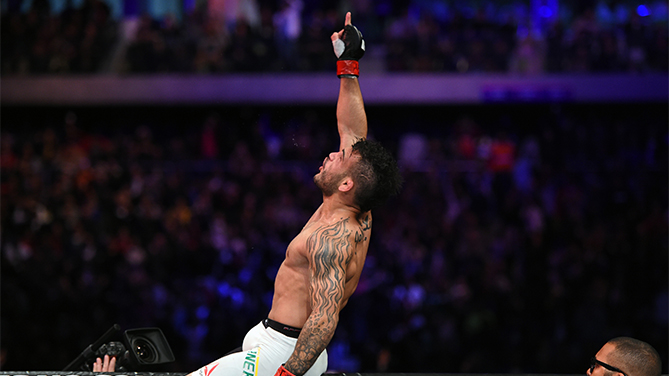 Bantamweight contender John Lineker made it two for two at 135 pounds, as he handed Rob Font his first UFC loss via unanimous decision.

Font used a stick and move strategy effectively in the early stages of the fight, but as the round progressed, the shorter Lineker’s vicious body attack had Font moving more than sticking, and the Brazilian was clearly putting points in the bank for later.

The second round was similarly paced, with Font keeping his distance and pecking away from long range and Lineker scoring with the harder blows when he was able to briefly pin his opponent to the fence.

In the third though, Lineker broke the fight wide open with an aggressive ground-and-pound attack that left the gutsy Font on the wrong side of the scorecards.