Maia puts title chase on hold to focus on Brown

Just because someone has a reputation for being the quiet sort, that doesn’t mean he can’t make some noise sometimes. And when that happens, it usually speaks louder than anything else in the room.

At least that was the case in December, when welterweight contender Demian Maia followed up an impressive win over Gunnar Nelson with an even more impressive post-fight interview in which he made his thoughts known about the current 170-pound rankings and his worthiness for a title fight. Shots were fired, and Maia had made two bold statements in one night – one during the fight, and one after it.

“I’m not sure if I would describe it as satisfying,” he said. “I mean, it`s always satisfying to express yourself after a win, but the most important thing is that I was sincere and addressing something that I`m sure bothers a lot of fighters, MMA professionals in general, and even a lot of the fans. It`s very frustrating to have your career depend on, at some level, random choices and decisions by people who are not necessarily taking that task so seriously, and basing their decisions on numerous subjective matters instead of an objective criteria.”

With a 7-2 record in the Octagon since moving to the welterweight division in 2012 – a slate that includes four consecutive victories heading into this Saturday’s UFC 198 bout against Matt Brown – Maia certainly has a strong case for a crack at champion Robbie Lawler. But a glance at the current rankings show him still outside of the immediate title conversation.

“In the end, I entered that fight at number six in the rankings, and I`m still number six going into my next fight," Maia said. "It goes to show our sport still needs to mature a lot in certain aspects, and I think those discussions are important so we can start to drive in the right direction. It takes time, but eventually it`ll get better.”

And if Maia can’t change the system, he’ll just have to do what he’s been doing, and that’s winning. Brown may sit two slots below Maia in the current rankings, but “The Immortal” is a respected contender and a five-fight win streak would be an impressive bargaining chip for the Sao Paulo native to use. But he’s not looking too far ahead.

“All I can do is focus on this fight, and try my best to win it,” Maia said. “It`s worthless to think about what will happen next, as we have a tough fight ahead and no one can look past Matt Brown. But I surely feel the winner of this fight deserves a lot of credit, and I think will be deserving of a title shot. What will happen will not depend on us only, but I`m sure I`ll talk a lot about it if things go well, and Matt will certainly do the same.”

The respect Maia has for Brown – and frankly for everyone he faces – is obvious, but he does find time to laugh when asked what difficulties his opponent brings to the Octagon this weekend.

“All of them,” he said. “Matt is a very experienced fighter, well rounded, with great striking skills, a very good pace and constant pressure. He is a tough matchup for anyone, and at the top of this weight class, anyone can beat anyone on a good night. I have a lot of respect for his skills.”

The feeling is mutual, and the danger for Ohio’s Brown is that he will be facing perhaps the best version of Maia that we’ve seen. Since his Fight of the Night decision loss to Rory MacDonald in 2014, he’s won four straight, including dominant victories over Neil Magny and Nelson that have him, at 38, seemingly getting better with each fight. 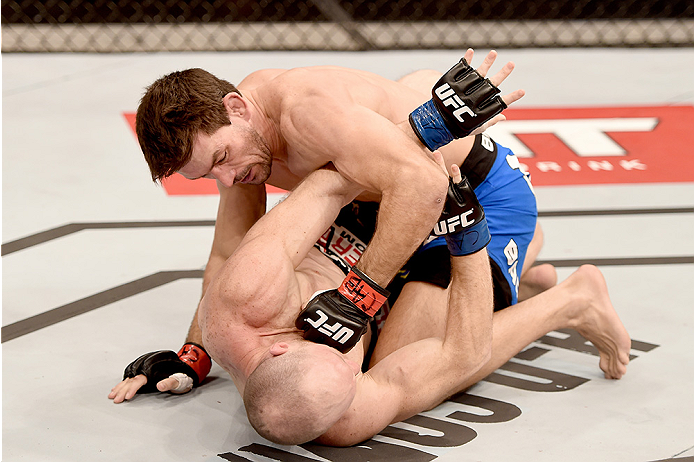 “I really feel like I`m still evolving from fight to fight,” he said. “I have been doing good camps with pretty much the same team, one after the other, since I dropped to welterweight, and I feel like with each camp we improve a bit and I become a better fighter. I`m more experienced now, and we learned how to make my training more objective towards my style and my goals. I feel I maybe needed to go through different phases to mature as a fighter, and develop to get to this point. I honestly feel better with each fight, and believe I can potentially beat anyone in my weight class. With that said, you are always only as good as your last fight, and fights in the UFC top 15, especially at WW, are extremely even and tough.”

But when skills are equal or able to nullify each other, what is the intangible that can be the difference between winning and losing? It usually comes down to experience, and Demian Maia is not the fighter he was the first time he challenged for a title against Anderson Silva in 2010.

“I feel I`m a much more experienced fighter and I have better tools nowadays to compete for the belt than I had back then,” he said. “Fighting Anderson was a great experience, as he is certainly one of the best of all time, if not the best, and was at his peak when we fought. There's nothing I want more right now than another chance at the belt, but I know I have a tough fight ahead and have to focus on this fight only for now.”