Maia Keeps the Focus Where It Belongs 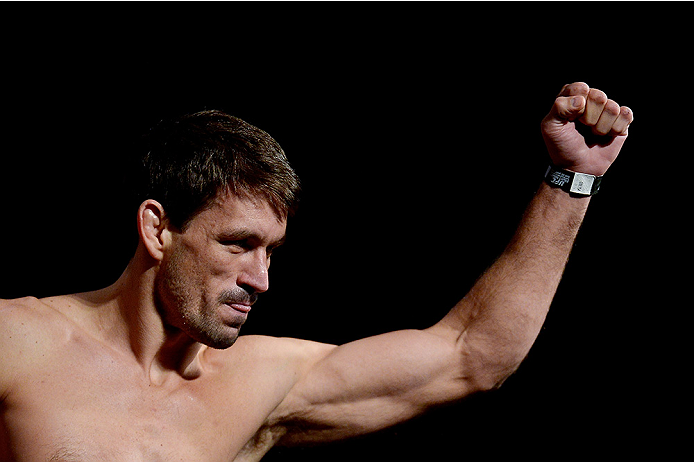 Demian Maia had been here before, but going into the fifth round of a fight for the third time in his career isn’t something that ever gets easier. At that point in his March bout with Ryan LaFlare, he had a comfortable lead on the scorecards, but five minutes is an eternity when your gas tank is running on empty. That’s when experience comes in.

“There are different situations,” Maia said of going five rounds, like he did previously with Anderson Silva and Jake Shields. “Sometimes you get into the fifth round needing to finish a fight. Like against Anderson Silva I knew I had no option but to try anything and go fight with my heart in the fifth. With Shields it was a different scenario and I tried to keep focused and calm and later I thought that maybe I should have pushed it more in the fifth.”

Maia lost to Silva over five rounds in their 2010 title fight, and suffered the same result against Shields in 2013, only that time it was by way of a controversial split decision. The third time around, he wasn’t going to let LaFlare steal this one.

“Against LaFlare, I was very tired coming to the fifth, and I knew I could not take big risks anymore, as I was so tired,” he said. “I think you’ve got to be well-conditioned and just keep focused, have that bigger will and just push through. It's more of a mind battle than anything else at that point, because you are gonna be tired no matter what, but you’ve got to also trust that you trained to do it.”

The Sao Paulo southpaw made it through those final five minutes and picked up the unanimous decision victory, his fifth in seven tries since moving from middleweight to welterweight. And with his number six ranking at 170 pounds secure, he’s in a good place heading into Saturday’s UFC 190 bout against Neil Magny in Rio de Janeiro, his third straight in Brazil.

“I like fighting in Brazil,” he said. “It's a different pressure but it's good, as we get support from the crowd and don't have to do all the big traveling. It's certainly a different kind of challenge though, and it can be tricky if you get too comfortable or let the pressure get to you because of the responsibility. All in all, I like both experiences (fighting abroad and in Brazil), but I'm enjoying fighting in Brazil and especially on such a big card like this one.”

On a stacked card that includes several Brazilian superstars, Maia is in one of the most important showdowns against Magny, who has seemingly come out of nowhere to win seven straight bouts and make his way into the top 15. Maia, who is always respectful of his foes, feels that way about the Coloradan as well, describing him as “a well-rounded, very well-conditioned fighter with good skills and a great reach, who uses his skills well and keeps calm during any situation in a fight. He has been on a great win streak, and that certainly adds confidence, so he is certainly a very tough opponent.”

So how does Maia, a methodical battler who calmly finds an opponent’s weaknesses and exploits them, put that seed of doubt in Magny’s mind sooner rather than later on fight night? He doesn’t, instead letting time take its toll.

“I think for every fighter, confidence grows or gets lower during a fight depending on how it's going,” he said. “I feel whoever can make their strategies work the best will grow in confidence and vice versa, like in any fight.”

Nearly 30 pro fights will give you that unique perspective on the chess match that takes place in every bout. Yet despite the 37-year-old’s longevity in the sport, he’s no gatekeeper. He may even be at the top of his game if his performance for much of the bout against the previously unbeaten LaFlare is any indication. And a Maia firing on all cylinders is a tough out for anyone at 170 pounds.

“I feel that I have a chance at beating anybody in my weight class on a good day and with the right strategy, I certainly do,” he said. “There are so many great fighters in this weight class and it's so competitive nowadays, that I really think anyone can beat anyone on a good night, which is great and complicated at the same time because it makes it much tougher to climb up the rankings. I think I evolved a lot as fighter in the last years, not only with the weight class change but with the training changes, the different approaches I got to the game from the past couple of years, and also the experiences such as the Shields and Rory (MacDonald) fights. I don't know if it's at the right time or not, but we can't control the past anymore, so I focus on what's happening now and I want to always try my best and keep evolving as long as I can.”

A win on Saturday does make another statement though, and if Maia keeps this up, he may be discussing a title shot by the end of the year. Too soon? It’s never too soon, at least from us on the outside. For the man in the Octagon, it’s one fight at a time.

“Winning is always what can take you to a title fight, but the weight class is so competitive that who knows how many wins are needed?” Maia said. “It depends on so many things, like what happens in other fights with the other guys, how you win, and also a bunch of things you don't really control. Only thing you can try to control is to try you best to win fights, so that's what I have to focus on. Magny is a tough fight already, so that's the only thing I'm thinking now.”