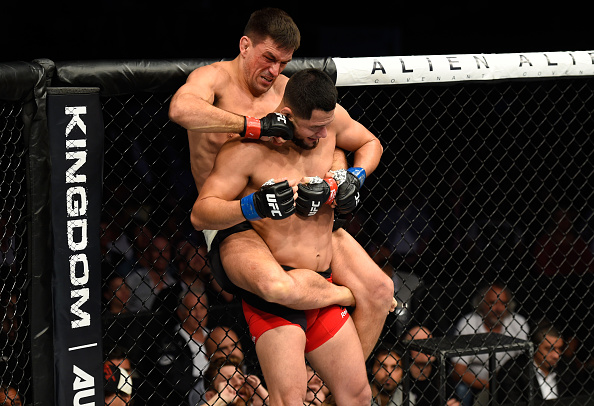 Demian Maia had to walk through fire to get his seventh consecutive victory on Saturday night, but after a hard-fought split decision win over Jorge Masvidal in their UFC 211 main card bout at American Airlines Center in Dallas, Maia will now get his shot at UFC welterweight champion Tyron Woodley.

“It’s a dream come true, I’ve been working so hard for this,” Maia said after the razor-thin victory that pushed him to the limit.

Maia relentlessly went after the takedown in the opening minute, Masvidal firing off strikes every step of the way. But in the second minute, Maia took his foe’s back while the two stood and he went to work for the submission. Masvidal’s defense was rock solid though, and late in the frame, he got free and opened up with a barrage of strikes before round’s end.

Masvidal had momentum on his side in round two, but the bloodied Maia was able to get the fight to the mat in the second half of the frame. And though the Sao Paulo veteran wasn’t able to capitalize and get the finish in the closing minute, he did have control, making the scoring of the stanza a key moment in the fight.

After the two combatants kept it standing for the first half of the final round, Maia got Masvidal to the canvas one more, and he was able to take his opponent’s back. Again, he wasn’t able to put Masvidal away, but his dominance on the mat proved to be enough for the Octagonside judges, who rendered 29-28, 29-28 and 28-29 scores for the No. 3-ranked Maia, who improves to 25-6. The No. 5-ranked Masvidal falls to 32-12.

The consensus among fans and pundits is that Mexican phenom Yair Rodriguez will one day wear a world title belt, but veteran contender Frankie Edgar made a statement in their featherweight bout and momentarily put the brakes on his foe’s rise, halting Rodriguez after two one-sided rounds.

Edgar, the former UFC lightweight champion, put on a ground-and-pound clinic in the first round, getting Rodriguez to the mat in the second minute and keeping him there for the rest of the frame, cutting and nearly closing Rodriguez’ left eye with a barrage of strikes.

New Jersey’s Edgar got another takedown to kick off round two. This time, Rodriguez nearly locked up a kneebar, but Edgar got free and kept the pressure on, firing off punches and elbows that continued to batter the 24-year-old. At the end of the round, the Octagonside doctor had seen enough, and with Rodriguez’ eye shut, referee Chris Reed halted the bout at 5:00 of the second round.

David Branch’s first UFC fight since 2011 was a successful one, as he won a three-round split decision over No. 9-ranked middleweight Krzysztof Jotko, who saw a five-fight winning streak snapped in the main card opener.

A minute into the fight, Branch smoothly landed a takedown, immediately putting the fight where he wanted it to go. Jotko managed to get to his feet midway through the round, but Branch kept him locked up against the fence. With 90 seconds left, Jotko scored a takedown of his own, but both jumped back up, remaining in a clinch until the horn sounded.

Jotko began to get his striking in gear in the second, and even when Branch was able to work his grappling, Jotko got out of trouble with little difficulty.

The action didn’t pick much up in the third round, drawing boos from the crowd, but a Branch takedown may have been the deciding factor for the New Yorker, who improves to 21-3 with the victory. Jotko falls to 19-2.