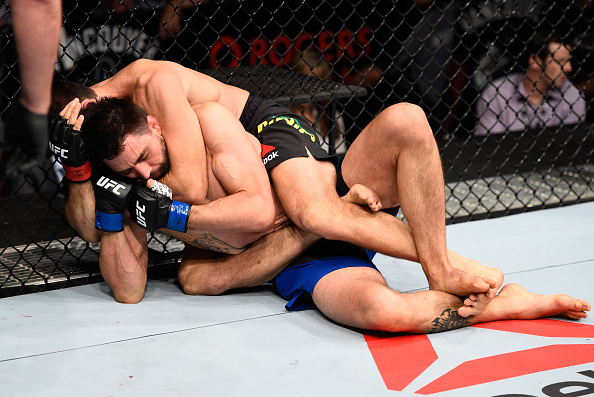 Demian Maia’s first fight in Vancouver was a disaster, as he lost to Mark Munoz in 2011. Five years later, the second one ended in a much more favorable fashion for the No. 3-ranked welterweight contender, as he submitted former interim UFC champion Carlos Condit in the first round of their main event bout at Rogers Arena on Saturday.

“I knew it would be a hard fight,” Maia said. “I’m just so happy. I think I earned a title shot, and now, finally, I will get the chance to fight for the title.”

New welterweight champion Tyron Woodley is expected to make the first defense of his title against Stephen “Wonderboy” Thompson. Maia, who has won six straight, says he has no problem sitting in the wings until that score is settled.

“I will wait for the winner of Woodley and ‘Wonderboy,’” Maia said.

The 38-year-old Brazilian has certainly earned his spot, and while he’s been progressively more impressive during his recent streak, he took it to a new level in Canada, and in the process tied Matt Hughes and Donald Cerrone for the third most wins in UFC history with 18.

It only took 30 seconds for Maia to get Condit to the mat, and he worked diligently to get the Albuquerque native’s back, and he succeeded there as well. From there, it was just a matter of time until he sunk in a rear naked choke, forcing Condit to tap out at 1:52 of the opening round.

The No. 4-ranked Condit, 32, who was back in action for the first time since a split decision loss to then-champion Robbie Lawler, was non-committal about his future.

“Congratulations to Demian,” he said. “I have mad respect for him as a martial artist and as a man. As far as my future, I have no idea. We’ll just have to see. Obviously I’m disappointed tonight. It wasn’t my night.”

It was Maia’s night, though, and he’s ready to claim his shot at the gold.