Maheshate | Welcome To The UFC

Maheshate Makes His UFC Debut Against Steve Garcia At UFC 275: Teixeira vs Prochazka
By Kevin Schuster, @KevinESchuster on Twitter • Jun. 9, 2022

Making his first walk as a UFC fighter, Maheshate will enter the Octagon at UFC 275 a calm and composed 22-year-old, despite competing at a sold-out Singapore Indoor Stadium.

Believing in himself has been a staple in his mental preparation ahead of every one of his mixed martial arts bouts, removing doubt through the hard work put into his training. His calm is also due in part to his familiarity with UFC that came during his fight on Dana White’s Contender Series last November against Achilles Estremadura.

“I actually feel better [this fight] because the last time, when I came to Las Vegas [for my fight against Estremadura], I had jetlag,” Maheshate said.

Maheshate’s battle on the Contender Series was telling of his character and will. With a UFC contract on the line, and UFC President Dana White watching intently, he needed to overcome numerous adversities if he wanted to earn a contract.

“Maheshate was one of the biggest [underdogs] on the entire card but he proved a lot in this fight,” UFC broadcaster Laura Sanko said. “He was wobbled twice in the first round but through the following rounds he was able to rally, pour on the volume and eventually do enough to earn that UFC paper.”

Struggling at first, Maheshate couldn’t match the speed and volume of striking that Estremadura was putting on him. Yet Maheshate was able to withstand the pressure and pick up the pace in the later rounds.

“For a brief moment in the third round it became a striking display for Maheshate to show what he’s made of, to show the diverse arsenal of attacks he’s got,” UFC commentator Michael Bisping said after Maheshate’s win.

Landing a flying knee straight through the guard of Estremadura in the second round, Maheshate turned the tide, eventually earning a unanimous decision victory. A win isn’t always enough on the Contender Series to be one of the few fighters to earn a contract, because you not only need to win, but also make a case that you can compete with the best of the best.

Maheshate’s entertaining final 10 minutes of the fight did just that, earning him a UFC contract. In the process, he became the first Chinese fighter in the five-season history of the show to do so.

Riding a six-fight win streak, the 22-year-old lightweight has only seven professional fights to his name and is entering one of the most talent stacked UFC divisions. Standing across him in Singapore is Steve Garcia, another Contender Series alum who failed to earn a contract directly after his win on the show but has since proved his worth to be in the promotion. 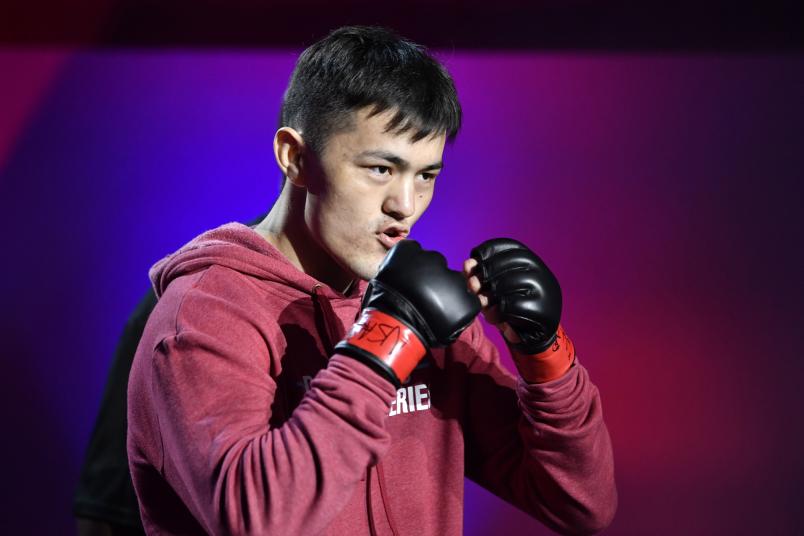 With both lacking significant Octagon experience, styles will play a huge role in the outcome of this fight. Battling against a southpaw, Maheshate already feels he’s at an advantage even before skills and tactics come into play.

“I know my opponent very well; I’ve watched his [UFC] fights,” Maheshate said. “I know that he’s a southpaw fighter and all of my sparring partners are southpaw fighters, so that’s very suitable matchmaking for me.”

The two heavy-handed strikers hope to close the show early, like they have a combined 12 times in their professional careers. Maheshate’s diversity of strikes poses an unpredictable threat that will be difficult for Garcia to deal with come fight night.

“I’m going to use my striking skills, use a lot of techniques so that people remember me because they are still fans in domestic China or internationally that don’t know my name yet.”

The first pay-per-view in Southeast Asia is a landmark event for UFC, and with fans watching from around the world, an impressive victory could exponentially boost Maheshate’s stardom.

“I’m very excited,” Maheshate said. “There’s a lot of good fighters on the card and I think that’s a very good opportunity for me.”