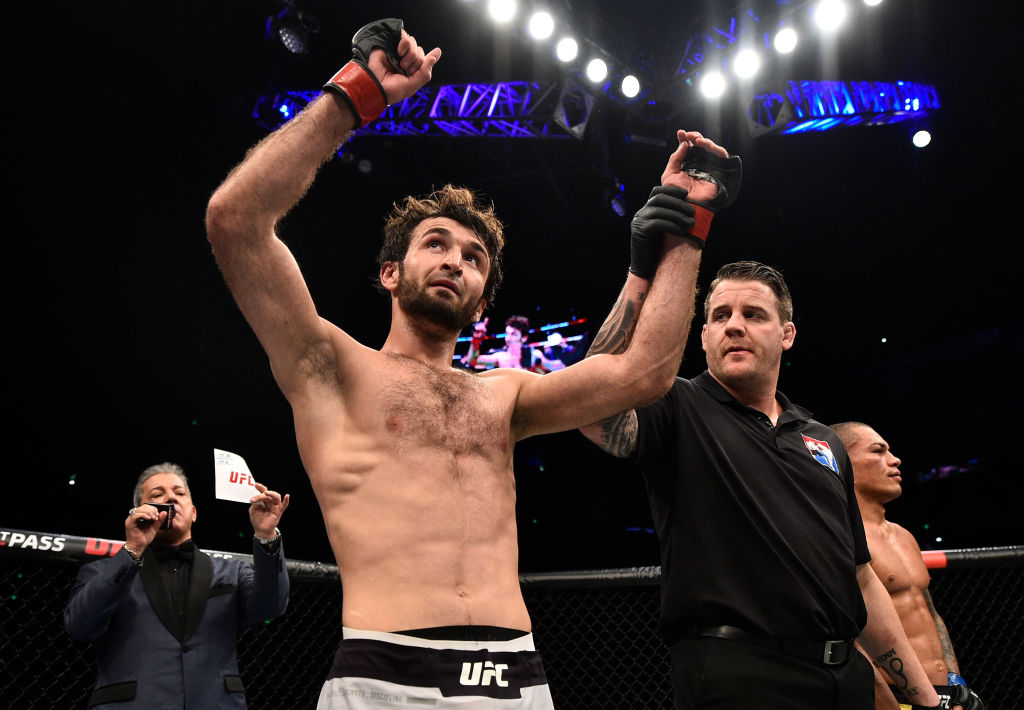 The word circulated fast. No names were mentioned, no details were shared, but it got out recently that there wasn’t a long line – or any line at all, for that matter – to be the third man to face Zabit Magomedsharipov in the Octagon.

Yet the rising featherweight star, who did get Kyle Bochniak to step up for Saturday’s UFC 223 bout, doesn’t put much stock in such talk.

“On the one hand, of course, it's nice to know that I'm regarded as a dangerous opponent and they don’t want to risk taking a fight with me,” Magomedsharipov said through translator Rizvan Magomedov. “But on the other, we don’t fully know the actual reasons for opponents refusing. Therefore, we will not make any sensational news out of it. The most difficult thing in this situation was to be in standby mode, when you don’t know if the fight would still take place on a planned date or not.”

It’s a classy response from a young man who has captivated the fight world thanks to a pair of Performance of the Night submissions over Mike Santiago and Sheymon Moraes that not only showcased his finishing ability, but a dynamic style on the feet and ground that has made him a must see at 145 pounds. Yet perhaps the most interesting aspect of the 27-year-old’s game is his calm on fight night.

“Calmness in a battle comes from the long and productive preparation before it,” he said. “I've been in sports since my childhood and I have great experience in performing in different amateur sports. And in New Jersey, I train with the fighters who are at the top of UFC in their weight classes: Frankie Edgar, Edson Barbosa, Eddie Alvarez, Marlon Moraes. When you realize how much hard work has been done in sports for my entire life, the confidence and calmness come by themselves. All that remains is to show everything you can during the fight.”

Magomedsharipov has shown plenty thus far in his UFC run, which came off the heels of high praise from his teammates and renowned coach Mark Henry, and while he’s young in his career, many believe he can make a run at the featherweight elite right now. Yet not surprisingly, the Dagestan native is choosing to stay patient and let such matters play out when the time is right.

“I objectively look at things,” he said. “It’s rare for anyone to fight with the top fighters at once. But I have excellent management. That’s why my business is to train, to win and to show memorable fights, and my managers Ali Abdelaziz and Rizvan Magomedov will take care of everything else.”

The next order of business is Boston’s Bochniak, a gritty competitor who is comfortable in the underdog role. Yet just because Magomedsharipov is the favorite, that doesn’t mean he’s acting like it.

“Kyle is a tough fighter with good endurance who lost or won most of his fights by decision,” he said. “I know many people believe in my victory, but I don’t think that the fight will be as easy for me as it seems. Kyle needs the victory just like me. Therefore, I readied myself for a full three-round fight.”

Three rounds of the division’s newest star will fit just fine with Brooklyn’s Russian population, which should be out in force for Magomedsharipov and headliner Khabib Nurmagomedov.

“I'm sure there will be tremendous support in Brooklyn, not very different than if the fight was held in Russia. I hope I’ll be able to meet the expectations of the Russian-speaking public of Brooklyn and my fans from all over the world and win.”

Then what for a man who is simply called Zabit by his growing number of fans?

“Surely, I have plans to win at UFC 223,” he said. “Then I would like to take part in a UFC event in Russia, if it takes place. At the moment I have a contract for four fights, so I expect to extend the contract with the league and have at least three fights in 2018, which in the case of a favorable result can bring me closer to the fight for the belt.”