Magomedsharipov, Kenan get finishes on prelims 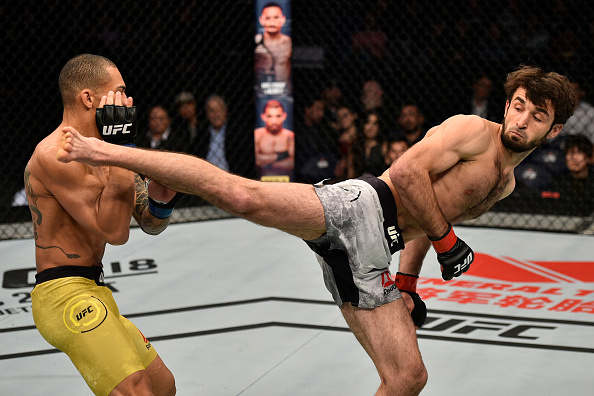 Hot featherweight prospect Zabit Magomedsharipov may very well be the hottest prospect in the entire UFC after he scored another impressive finish, this one a third-round submission of Octagon newcomer Sheymon Moraes in UFC Shanghai prelim action at Mercedes Benz Arena.

Magomedsharipov (14-1) picked up where he left off in his debut against Mike Santiago, showing off all aspects of his MMA game, from effective striking from distance to throws and ground-and-pound. Moraes (9-2) wasn’t out of the fight by any means, as he defended well on the mat and got in some kicks on the feet, but it was a clear round for Magomedsharipov.

The fast, entertaining pace continued into round two, with Magomedsharipov throwing Moraes to the mat, only to get mounted and nearly caught in a triangle choke. Magomedsharipov easily got out of danger, and after scrambling and taking Moraes’ back and then getting the mount, he began delivering thudding ground strikes. Moraes’ kept working his way out of trouble, only to find himself in more of it as the round progressed, locking up another frame for Magomedsharipov.

Despite being up two rounds, Magomedsharipov continued to press for the finish, and in the closing minute, he got it over the tough Brazilian, forcing a tap via anaconda choke at 4:30 of the third and final round.

Beijing’s Song Kenan made a memorable debut, picking up the fifth fastest knockout in UFC welterweight history as he finished Bobby Nash in 15 seconds.

After an inadvertent low kick by Song brought a brief halt to the bout as it began, an overhand right by Song put Nash on the canvas. Song went on the attack with several follow-up blows and referee Herb Dean had seen enough, halting the bout at the 15-second mark.

Yan blitzed Curran with kicks and punches as soon as the fight began, dropping her foe to a knee with a right hand before 30 seconds were gone. After surviving the initial assault, Curran cleared her head and worked her clinch game against the fence for a spell before the two separated. Curran subsequently looked for takedowns, but Yan stayed upright and was able to get in more hard strikes when the two were at distance.

Yan’s success at distance continued in round two, but this time Curran was able to get her takedown. Yan got up quickly, but Curran kept her foe locked up against the fence for a bit before the Beijing product got loose and went back to her striking attack. With two minutes left, a right by Yan jarred Curran again, but the Hawaiian shook it off and kept doing good work in the clinch.

Told by her corner that she needed to get a finish in the final round, Curran chased after it in the third, getting a takedown with just over three minutes left. Yan smartly looked to force a restart, and while she didn’t get it, she did jump up with a minute remaining, much to the delight of the crowd. And while Yan got her mouth bloodied in the closing seconds, a final barrage of shots cemented her win by scores of 30-27 and 29-28 twice.

Coming in on short notice to replace countryman Liu Pingyuan, Heilongjiang’s Song Yadong put on a show for fans in China, submitting Bharat Kandare in the first round.

Showing remarkable poise for someone just 19 years old, the youngest fighter on the current UFC roster patiently stalked Kandare, eating some sharp jabs along the way but still controlling the action. With a minute left, Song found his opening, drilling and dropping Kandare with a right hand. As the Mumbai product tried to scramble out of trouble, Song caught him in a front choke that produced a tap at 4:16 of round one.

Looking like a different fighter than the one who fought Derrick Lewis 11 months ago, Abdurakhimov stood in the pocket with Sherman from the start. And while he took a punch that opened a small cut, a right hand caught the Mississippi native flush and spun him around, a left hook followed, putting Sherman on the deck and bringing in referee Steve Perceval to halt the fight at 1:24 of the opening frame.

With the win, Dagestan’s Abdurakhimov improves to 18-4; Sherman falls to 11-4. 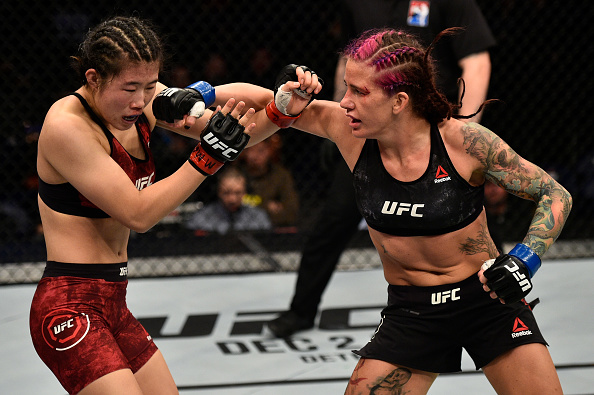 Mazany (5-1) swarmed Wu at the start, landing a couple hard shots before clinching with her foe. Wu got in a counter of her own, opening a cut over Mazany’s left eye, and with three minutes left, she put the Las Vegan on the mat briefly before the two separated and reset. Soon the two were back to the fence and with just over two minutes left, Mazany got the fight to the ground and began firing away with strikes. Wu nearly caught her opponent in an armbar, and in the ensuing scramble she got upright for a moment before the two hit the mat again. When they rose, it was Wu in control against the fence, and they stayed there until the horn.

Wu (9-2) took a left kick to the face to open round two, but she walked through it and bulled Mazany into the fence. Mazany fought through several fence grabs by Wu to score a pair of takedowns, and a barrage of strikes followed.  Wu got upright with under two minutes to go, but Mazany kept the pressure on against the fence. In the closing seconds, referee Marc Goddard gave Wu a strong warning for fence grabbing, and to make matters worse, Wu appeared to hurt her shoulder just before the horn sounded.

Still going strong entering the third frame, Mazany continued to press the action on the mat, and while Wu tried to look for a submission from her back, it was “Danger” who stayed in control and wrapped up the win by three scores of 30-27.

The Philippines’ Rolando Dy picked up his first UFC victory in featherweight action, holding off a solid effort from Beijing newcomer Wuliji Buren to take a three-round unanimous decision.

Things didn’t get off to a great start for Buren, who was dropped by a left hook 30 seconds into the bout, but he rebounded nicely with a pair of takedowns that got Dy’s attention. The second round was even closer as the two battled on the feet and mat, but in the third, Dy was able to stay a step ahead on his foe and secure the victory.

Dy missed weight for the bout, coming in at 148 pounds.

Heavyweight Cyril Asker went into the second round for the first time in four UFC outings and it resulted in one of his best performances, as he submitted late notice newcomer Hu Yaozong in the opener

Outside of a guillotine attempt by Hu, the first round was all Asker, as he dominated on the ground with a smothering grappling attack aided by several hard strikes.

Hu opened the second with some solid kicks, but soon he was back on the mat against the fence, and this time, Hu closed the show, using his striking to take his foe’s back and sink in the rear naked choke that produced a tap out at 2:33 of round two.

With the win, France’s Asker ups his record to 9-3. Beijing’s Hu, who replaced James Mulheron, falls to 3-1.