Magomed Ankalaev feels a duty to finish his fued with Ion Cutelaba at UFC 254 on Saturday
By E. Spencer Kyte, on Twitter @SpencerKyte • Oct. 20, 2020

Less than 30 seconds after the bout started, Magomed Ankalaev looked to have Ion Cutelaba rocked, a left high kick setting off a frantic sequence where the streaking light heavyweight from Dagestan connected with a series of blows that appeared to have “The Hulk” on shaky legs, struggling to find his equilibrium.

With each blow that crashed home, veteran referee Kevin MacDonald crept forward for a closer look, anticipating a finishing blow and eager to ensure that the staggering Cutelaba didn’t take any unnecessary punishment.

When Ankalaev connected with a left hook that caused Cutelaba to stagger backwards, then fire off a wild right hand that was nowhere near the target, MacDonald jumped in, waving off the contest and kicking off a strange odyssey that will end this weekend on Fight Island in Abu Dhabi.

“I wouldn’t say I feel a duty to do so, but I have to finish this,” Ankalaev said of his protracted feud with Cutelaba, whom he faces for a second time on Saturday in the opening bout of the UFC 254 pay-per-view main card.

As soon as MacDonald raced in between the two combatants on that crisp February evening in Norfolk, Virginia, Cutelaba began vehemently protesting the stoppage. Slow-motion replays illustrated why.

While Ankalaev was attacking, many of the blows failed to land flush, and the wobbles Cutelaba exhibited that drew MacDonald in were clearly a case of the 26-year-old Moldovan playing up their impact in hopes of making Ankalaev overextend and leave himself open to a powerful counter that could shift the tides in his favor.

The stoppage brought Cutelaba’s flawed plan to an abrupt halt, but the controversial nature of the finish prompted the UFC to re-book the two competitors against one another again in an immediate rematch at UFC 249 in April, only to have the COVID-19 pandemic that has swept the globe in 2020 decide to take an active role in determining when these two emerging light heavyweights would once again stand opposite each other inside the Octagon.

The original incarnation of UFC 249 was mothballed as the global pandemic brought sports everywhere to a halt. Rebooked for UFC 252 in mid-August, the rematch was delayed for a second time when Cutelaba tested positive for COVID-19, pushing the bout back another two weeks.

On the day of the fight, the pairing was scrapped for a third time, as Cutelaba once again tested positive for COVID-19, delaying things one more time.

“It has been a little frustrating, especially with everything going on in the world right now and our bout being rescheduled for the third time already,” said Ankalaev, who has remained tethered to Cutelaba since February, creating a nearly eight-month separation between appearances at a time when the light heavyweight division is undergoing a major shift.

Back in August, long-time champion Jon Jones vacated the title, creating a void atop the division and an abundance of opportunities for its competitors.

More from UFC 254: Fighters On The Rise | Where We Stand: Lightweights

Having won four straight and boasting a 14-1 record overall, the 28-year-old Ankalaev, who is currently stationed at No. 11 in the rankings, was an ideal candidate for a pairing with a Top 10 opponent as the matchmakers worked to establish a new pecking order in the light heavyweight ranks. 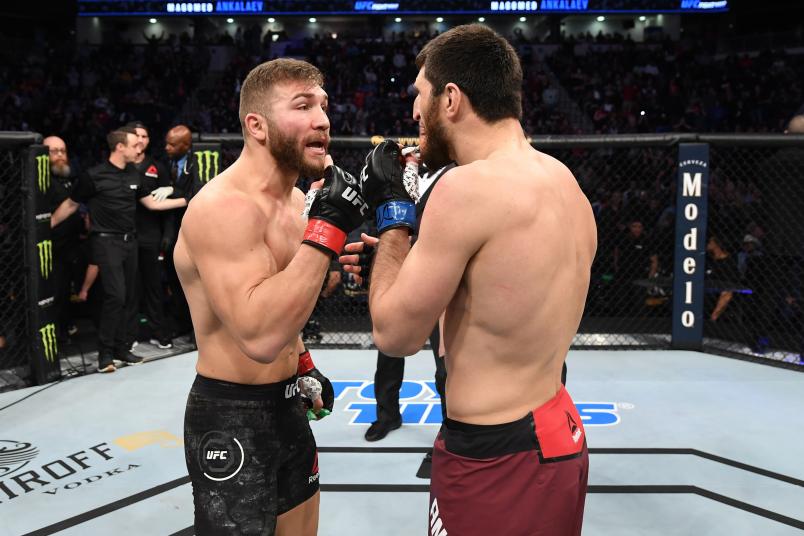 But while others in the Top 15 have been paired off two-by-two, he’s remained connected at the hip with the aggressive and improving Cutelaba, who has split his first eight appearances inside the Octagon as they once again look to run it back this weekend.

On the eve of hopefully finishing things with his seemingly permanent 2020 opponent on Saturday, Ankalaev is hopeful that he can continue to work his way up the divisional ladder after this one, though he’s solely focused on the piece of the equation he can control.

“I don’t have any sense of urgency,” began Ankalaev, who sees this oft-delayed, highly anticipated rematch with Cutelaba as a chance to make some noise in the suddenly shifting light heavyweight division. “I would like to face someone from the Top 10 next so I could get closer to the title.

While the stoppage in their first encounter was widely panned by critics and observers, Ankalaev’s performance in the 38-second affair seems to have been obscured and overshadowed by the controversy.

The reason MacDonald was primed to jump in and wave off the action is because it was largely one-way traffic heading towards Cutelaba during that initial flurry; he was the one on his heels as Ankalaev tossed head kicks at him with ease and attacked with lefts and rights, several of which found a home and made his opponent’s pantomime appear realistic in the heat of the moment.

Though few want to give him full marks for the victory, Ankalaev had shown an abundance of upside in his three bouts prior to his first appearance of 2020, rebounding from a last-second submission loss to Paul Craig in his promotional debut with dominant performances against Marcin Prachnio, Klidson Abreu and Dalcha Lungiambula before stepping into the Octagon with Cutelaba on February 29.

And after finding success early in their first encounter, the promising upstart sees no reason why the outcome will change when these star-crossed light heavyweight combatants finally — fingers crossed — square off for a second time this weekend.

“The result will be the same,” Ankalaev said without pause. “I’m not sure how, but I will get the victory.”