Magomed Ankalaev’s On The Doorstep Of His Dream

Three weeks out from a co-main event bout against Jan Blachowicz, Magomed Ankalaev received a life-changing phone call from the UFC, notifying him that former light heavyweight champion Jiri Prochazka suffered a serious shoulder injury and had vacated his title.

Ankalaev was asked to fill Prochazka’s spot in the main event and fight for the 205-pound crown. Originally a three-round bout, Ankalaev’s highly anticipated bout with Błachowicz transformed to a five-round main event title fight.

“Well, I’m always at home or in the gym,” Ankalaev said. “This time around I was at home, and I got a phone call from my manager, and I was told that I was fighting [Glover] Teixeira. A little bit afterwards I got a call back saying that Teixeira’s out, it’s going to be me against Błachowicz, five rounds. Of course, the answer was yes. I’m ready, let’s go.

“Usually, even when it’s a three-round fight for me, I still prepare like it’s five rounds, so honestly, nothing much changed. The only thing I can admit is it changed my approach and motivation. I’m more motivated.”

For Ankalaev, this fight has been over four years in the making. Dropping his debut via submission in the final second of his bout against Paul Craig, his only loss as a professional, Ankalaev has amassed nine consecutive victories, and has been considered a future champion by many during that stretch. This run included jaw-dropping finishes over Dalcha Lungiambula and Ion Cutelaba, among numerous dominant performances. 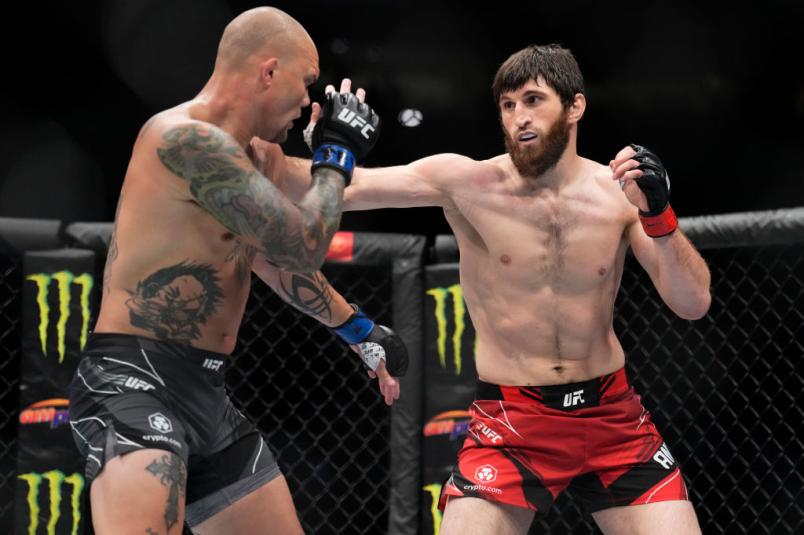 Magomed Ankalaev of Russia punches Anthony Smith in a light heavyweight fight during the UFC 277 event at American Airlines Center on July 30, 2022 in Dallas, Texas. (Photo by Chris Unger/Zuffa LLC)

The most important aspect to note from these performances is in the consistency of the result. Whether the fight stays on the feet or heads to the mat, Ankalaev is on the front foot and in a dominant position, rarely making any mistakes.

But the one crucial mistake that put a blemish on his record still sticks with Ankalaev to this day and has been the driving force in his unstoppable path to title contention.

“The first fight I had was unfortunate,” Ankalaev said. “I lost and it made me rethink everything. It made me more motivated [to get to the title] and it made me push harder, move forward. This has been a dream since then, to say I’m going to be champion someday. I’m now at the doorstep of my dream coming true and I will do whatever I have to do to get to this dream.”

This weekend at UFC 282: Błachowicz vs Ankalaev, Magomed will face his hardest hitter to date in the former champion Błachowicz, who has only recorded one loss in his last seven, including a title winning performance against Dominick Reyes and a successful title defense against Israel Adesanya.

Ankalaev was quick to praise Jan for his striking and “legendary Polish power,” but believes it will have no impact on the outcome of Saturday’s main event.

“I can’t say a bad thing about Błachowicz,” Ankalaev said. “He’s a great fighter, he’s got really strong punches, but this is a different type of fight. This fight is very important for me, so I’m prepared to dominate from start to finish and I’m going to make sure that I do whatever I have to do to come out the winner.”

When asked to say what a belt strapped around his waist would mean to him, Ankalaev was at a loss for words. Staring into the empty wall at the UFC APEX, Ankalaev’s imagination began to run, creating a picture of that exact moment – a moment he’s spent his entire life trying to achieve. On Saturday, he has the chance to turn it into reality.

“That’s a hard question,” Ankalaev said. “I don’t even know how to answer.

“I’ve done a lot of work to get here. It’s been a long way coming and I really think that it’s my time. It’s time for me to finally be called the champion.”