Heading into his fight at UFC 267 last October, Magomed Ankalaev was hopeful that a victory over former title challenger Volkan Oezdemir would be enough to convince UFC President Dana White that it was time for him to fight for the light heavyweight title.

That night in Abu Dhabi, Ankalaev did, in fact, pick up his seventh consecutive victory, outworking Oezdemir over 15 minutes to secure a unanimous decision win, but coming away from the contest, the streaking standout from Dagestan knew his chances of being elevated into a championship fight next were slim.

“I did expect that I wouldn't get a title shot after my last victory because I fought No. 7 and everyone who was in front of me were on winning streaks, as well,” said Ankalaev, who returns to action this weekend in a five-round main event clash opposite another former light heavyweight title challenger, Brazil’s Thiago Santos.

While he playfully lobbied for the UFC President to look his way when seeking out the next title challenger ahead of his fight with Oezdemir, the truth is that Ankalaev has never been upset about taking the scenic route towards the top of the division. Every step of the way, the talented 29-year-old has sought to focus on the positives that come with continually making the walk to the Octagon, logging more time in the cage, and challenging himself against another high-level opponent. 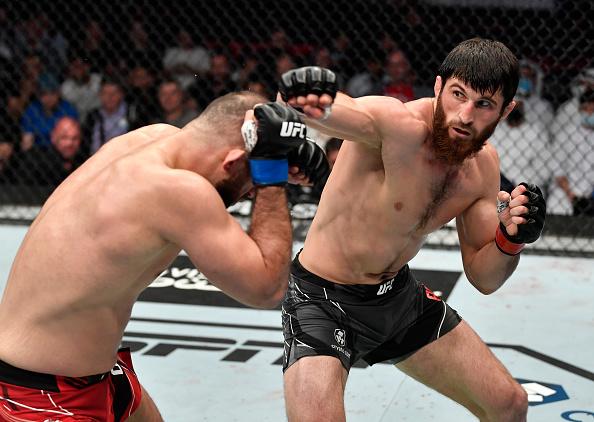 Like everyone else harboring championship ambitions, Ankalaev doesn’t want to have to wait too long before securing his opportunity, but just as he did heading into his fight with Oezdemir, the well-rounded terror who spent the final month of his camp in Las Vegas understands this weekend’s assignment is another step in the right direction.

“I came to I came to Vegas because my fight is here and also there is everything I need to prepare — UFC PI, gyms, sparring partners, et cetera,” began Ankalaev, who is 16-1 in his career, with his lone loss coming in literally the final second of his UFC debut opposite Paul Craig a shade under four years ago. “The last days have gone well, done with hard work, and now I’m looking forward to the weight cut.

“We’re moving forward slowly, but confidently,” he continued, shifting his focus to his journey up the divisional ladder. “The road to the belt is always tough, but that is what separates champions from average fighters.

“The whole road is filled with negative things, injuries, hard work, sacrifices, and it all becomes worth when you win, especially after you get that belt. That is the best positive moment in this sport.

“I feel great in the Octagon, and every fight I become more experienced and it boosts my confidence,” added Ankalaev, who heads into his first main event assignment this weekend opposite Santos brimming with confidence, while his opponent is looking to return to being the menacing figure he was at the outset of his move to the light heavyweight division. 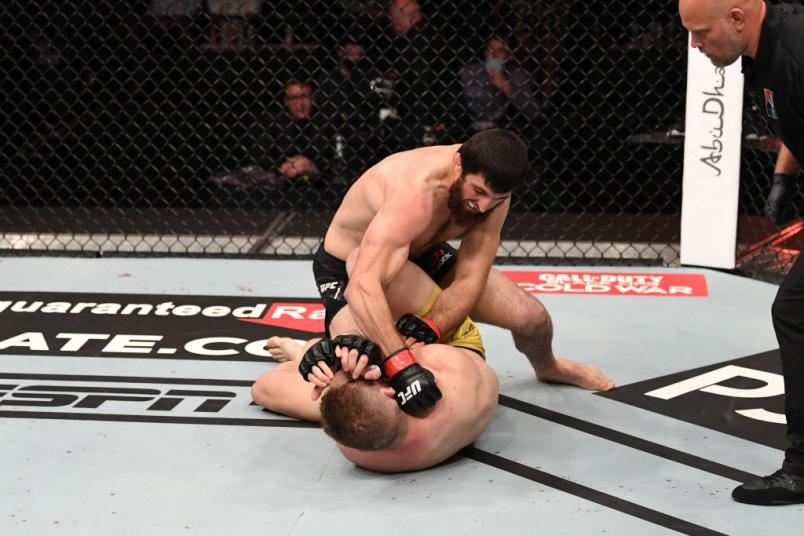 The 38-year-old Brazilian made his divisional debut six months after Ankalaev crossed the threshold into the UFC cage for the first time. Initially slated to face Top 10 stalwart Jimi Manuwa, he ended up facing Eryk Anders, stopping the American at the end of the third round.

A few months later, he faced Manuwa and knocked him out less than a minute into the second round, cementing his status as an intriguing new addition to the championship chase in the 205-pound weight class. Ten weeks later in Prague, Santos stopped future light heavyweight titleholder Jan Blachowicz early in the third round of their headlining clash, moving himself to the top of the list of contenders.

That summer, he dropped a split decision to Jon Jones in the main event of UFC 239, pushing the tenured titleholder to his limits despite suffering extensive damage to his left knee — and a partially torn meniscus in his right knee — during the contest.

He was out of action for more than a year, and since returning, “Marreta” hasn’t quite been the same.

After starting quickly against current champ Glover Teixeira, he faded just as sharply and was submitted in the second round, following up that setback with a lethargic showing in defeat opposite Aleksander Rakic. He snapped his three-fight slide last time out with a five-round decision win over fellow Brazilian Johnny Walker in an uncharacteristically action-less bout between the two, yet remains a fixture in the Top 5 and the kind of experienced, dangerous opponent championship hopefuls like Ankalaev need to beat in order to take that next step forward. 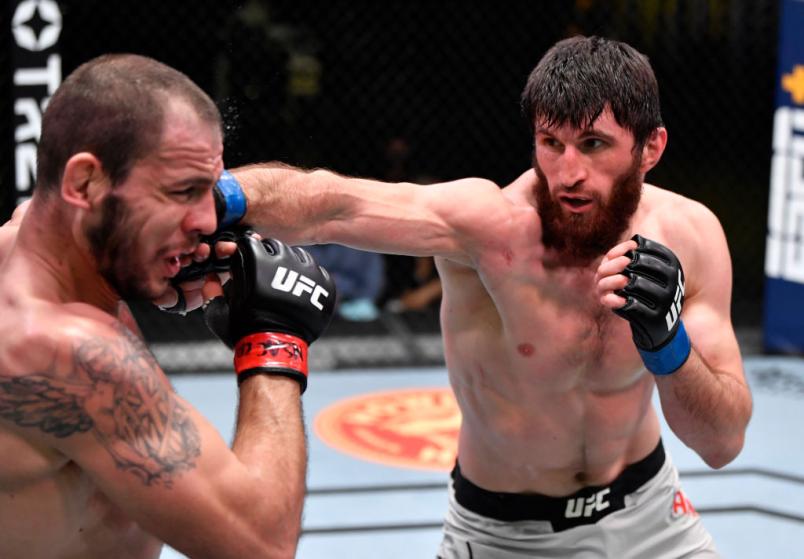 Magomed Ankalaev of Russia punches Nikita Krylov of the Ukraine in a light heavyweight bout during the UFC Fight Night event at UFC APEX on February 27, 2021 in Las Vegas, Nevada. (Photo by Jeff Bottari/Zuffa LLC)

“Thiago is a great, tough opponent, but this is just another step towards the belt for me, with all due respect,” Ankalaev said confidently.

With second-ranked contender Jiri Prochazka poised to challenge for the title in June, and the four remaining fighters stationed ahead of Santos in the Top 5 currently without assignments, it’s not unrealistic to envision this weekend’s contest potentially being the final stop on Ankalaev’s extended journey to a championship opportunity, provided things go his way.

But just as he’s done ahead of his last couple appearances, the contender is hopeful that’s how things shake out, but more than happy to accept whatever decision the UFC makes.

“If I could impress them with my performance, I believe I could get a title shot next,” said Ankalaev, “but it’s completely up to the UFC.”

When you know you’re eventually going to reach your destination, sometimes it’s nice to take your time getting there.