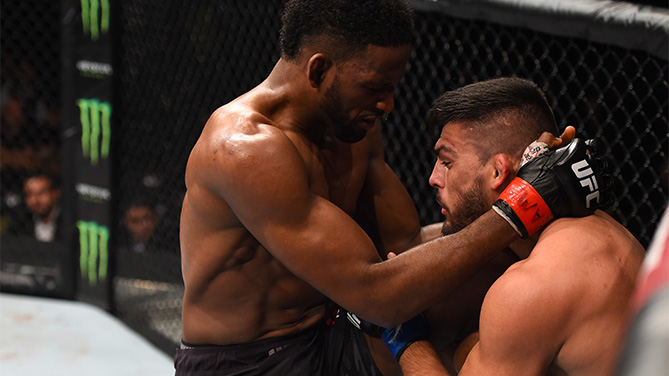 Down on the scorecards early, Kelvin Gastelum surged in the second half of his five-round UFC Fight Night main event against fellow welterweight contender Neil Magny Saturday night, but that early lead was enough for Magny to pull out a razor-thin split decision at Arena Monterrey in Monterrey, Mexico.

Scores were 48-47 twice and 47-48 for Magny, who took the bout on short notice after an injury to his teammate Matt Brown forced him out of the fight.

Both fighters got off some good strikes in the early going, setting a fast pace. Two minutes in, Magny scored the takedown and moved right into the mount. Gastelum defended well and got back to his feet in order to get his own takedown. This time it was Magny’s turn to scramble out of trouble and he did so, taking Gastelum’s back with 90 seconds remaining. Magny did some good work on the mat before the two rose, wrapping up a nice action round.

Gastelum had success in the second round when he could pin Magny to the fence, whether with his strikes or grappling. But unfortunately for him, that was only in the early part of the frame, as Magny roared back when he kept his back off the fence, landing crisp combinations as Gastelum backed up and then scoring a late takedown for emphasis.

The third was a close one, with Magny continuing to do what had got him through the first two frames as Gastelum started to close the distance with greater regularity.

In the fourth, his aggression paid off, as he dropped Magny with a right hand in the second minute. Gastelum moved in for the finish with ground strikes, but the Coloradan was able to weather the initial storm. Gastelum continued to work, and when Magny rose to his feet, he put him back on the deck with a left hook. Magny got back up and out of trouble, and after taking a peek at the clock twice, he made it out of the round.

Relentless in his pursuit, Gastelum chased Magny, and when he couldn’t land a bomb, he scored a big takedown in the second minute. After several ground strikes, Magny rose and displayed some solid close range striking before the two broke free. Magny continued to look at the clock, fatigue becoming an issue as Gastelum’s gas tank still appeared to be full. That didn’t stop Magny from getting a takedown in the final minute, but Gastelum reversed position, ending the round on top.