Magny Gets Record-Tying Win in 179 Prelims

Watch all the action from the UFC FIGHT PASS prelims here! 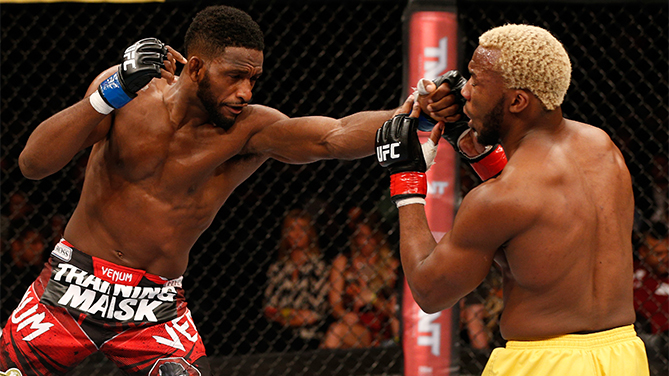 Denver welterweight Neil Magny kept his remarkable 2014 campaign going in UFC 179 prelim action at the Ginásio do Maracanãzinho in Rio de Janeiro, Brazil on Saturday, halting William Patolino in the third round for his fifth victory of the year, tying Roger Huerta's modern-era record for the most UFC wins in a single calendar year.

Magny’s boxing was sharp in the first, as he used slick footwork and a busy jab to keep Patolino from ripping off his power shots. The Brazilian did land some good shots in the first five minutes, but it was Magny’s activity level that kept him in control.

Midway through the second round, a fight broke out, with Patolino landing several hard shots when he pinned Magny to the fence, and the Coloradan answering right back as he defiantly tore after his foe with his hands down. With two minutes left, Magny got into some trouble against the fence, but when he got some daylight, he took Patolino down and jumped right into the mount position, finishing the round with a series of ground strikes.

In the second minute of round three, Magny got the bout back to the mat, and this time he didn’t let Magny off the hook, firing away with punch after punch until referee Eduardo Herdy stepped in at the 2:40 mark. 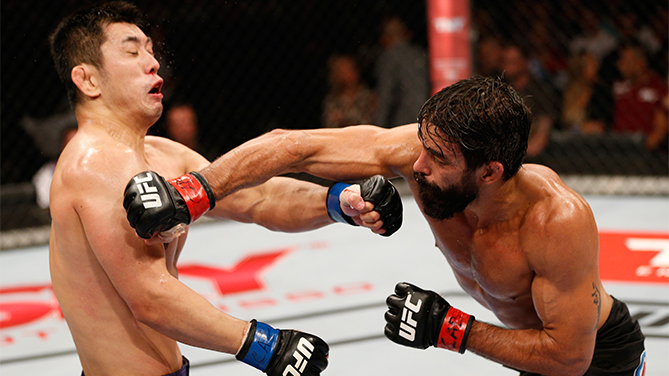 Rio’s Yan Cabral made a successful debut at 155 pounds, finishing Naoyuki Kotani via submission in the second round of their prelim matchup.

Neither fighter was in serious trouble in the opening stanza, but Cabral’s aggression and ground control allowed him to control the fight and take the round. In the second, Cabral (12-1) kept the pressure on, and as Kotani (33-12-7) tired, the Brazilian took over, getting the Japanese veteran to the mat, where he submitted him via rear naked choke at 3:06 of round two. 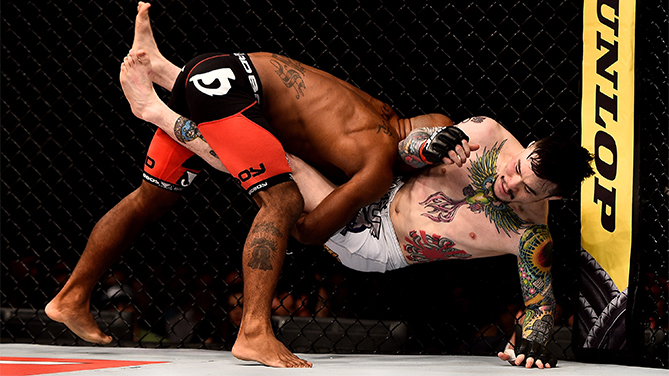 Sao Paulo’s Wilson Reis picked the perfect time for his most impressive win at 125 pounds, as he submitted veteran Scott Jorgensen in a single round in front of his home country fans in Brazil.

In the third minute of what had been a competitive opening round that saw Reis hit the deck briefly, Jorgensen got rocked by a left kick to the body and Reis picked up on it immediately, looking to finish matters with ground strikes. Jorgensen weathered the initial assault, but once Reis sunk in the arm triangle choke, that was the fight, with Jorgensen tapping out at the 3:28 mark.
"I started well in the fight but got hit and started to fight on automatic," Reis said. "I was pretty hurt and could only feel that he was coming my way, but I was able to get back to the fight. When I found the space, I kicked him and noticed that he felt it. Then I took the opportunity and finished the fight." 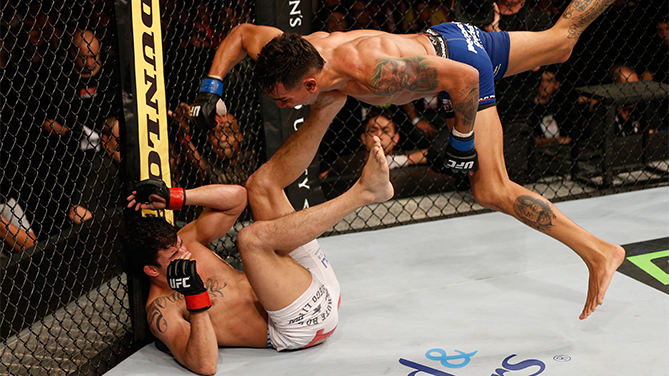 Featherweight prospect Andre Fili set a fast pace early and didn’t let up for the rest of his 15-minute battle with Felipe Arantes, winning a close unanimous decision over his Brazilian foe.

The pace of the first five minutes was furious, with Fili leading the way on the feet both at long-range and close quarters. Arantes answered back wherever the fight went, bloodying his foe’s forehead and even getting mount position on the mat briefly, but he looked to be tiring under Fili’s relentless pressure.

Arantes got the takedown to open round two, but Fili was able to reverse position and get on top, where he fired off hard ground strikes. Arantes got a reversal of his own in the second minute, and the elbows to the head followed from the Brazilian. An accidental kick to the head by Fili when both were grounded brought a brief halt to the action, and when the fight resumed, they went right back to the mat, staying there to the horn.

The back-and-forth action didn’t slow up in the third, with one fighter taking charge only to see the other come right back and seize control back. It was great for the fans, but likely hell for the judges who had to deliver a winner in the tightly-contested bout. 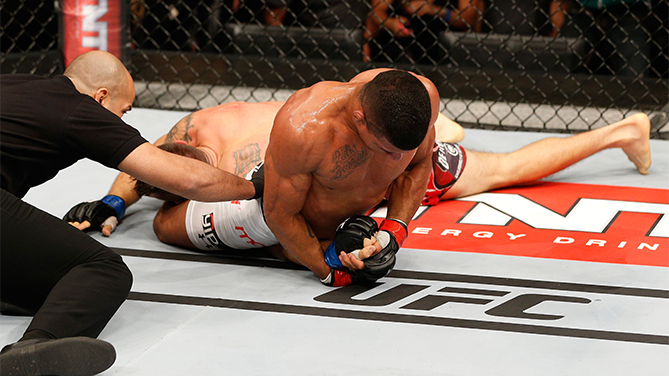 Highly-touted lightweight prospect Gilbert Burns made it 2-0 in the Octagon, submitting UFC debutant Christos Giagos in the opening round.

After largely keeping the fight standing in his debut against Andreas Stahl, Burns used his strikes to set up his world-class ground game, and once he got Giagos to the mat, it was simply a matter of time until he finished the newcomer. Moving effortlessly from the mount to Giagos’ back, he eventually sunk in an armbar with seconds remaining in the first, forcing Giagos to tap out at the 4:57 mark. 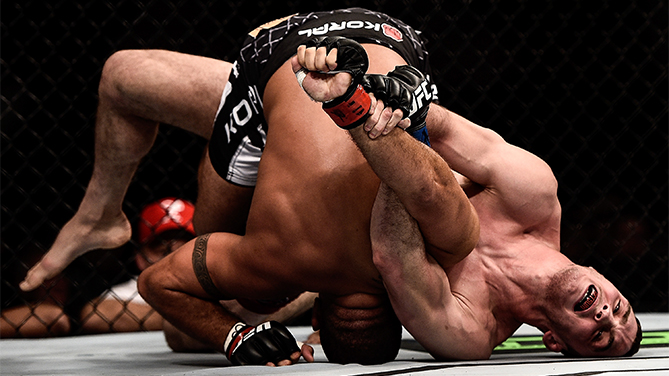 The third time was the charm for Minnesota’s Tony Martin, as he earned his first UFC victory in his third try, submitting Fabricio Camoes in the first round.
"It was a tough fight," Martin said. "He is a very good jiu-jitsu fighter. It has always been a dream to come to Brazil and show my Brazilian jiu-jitsu, and that's what happened today."

With the exception of a hard leg kick and a brief kimura attempt by Camoes, the fight was all Martin, who slammed Camoes to the mat in the second minute and then went to work on his foe’s left arm. Camoes looked to be on the verge of escaping on a couple occasions, but Martin kept the pressure on, forcing the Brazilian to tap out to a kimura at 4:16 of the opening round.