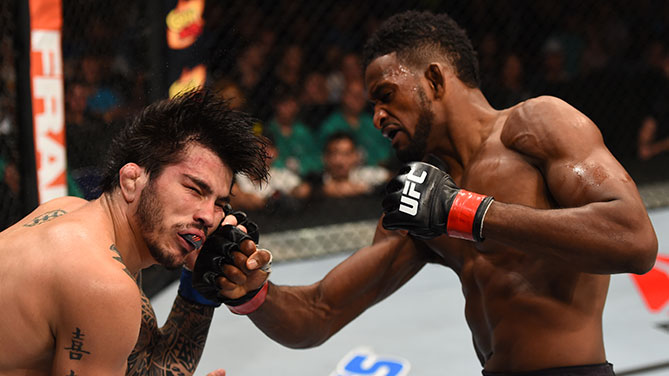 “It feels pretty good for a four-day camp,” Magny laughed, referring to his late-notice acceptance of the bout after an injury to Silva’s original opponent, Rick Story.

After a fairly slow opening minute, a missed spinning elbow by Silva allowed Magny to take control briefly on the mat. Silva got back up quickly and then took Magny down, jumping right into side control. After a spell on the mat, Magny scrambled out of trouble and took his turn in the lead, locking Silva up against the fence before another takedown with under a minute left, this one followed by a series of unanswered ground strikes.

Magny’s confidence was evident as Round 2 began, and the Coloradan peppered Silva with quick punches and the occasional hard shot down the middle. Silva was getting frustrated as he missed his wild swings, but with three minutes gone, he was able to catch Magny with a takedown. Magny didn’t stay grounded long, and he did some good clinch work once standing.

Silva attacked Magny’s legs with great success in Round 3, but this late in the fight, it wasn’t exactly a strategy that would end the bout, and Magny was still able to utilize his stick-and-move game to great effect before using his grappling to keep Silva guessing. 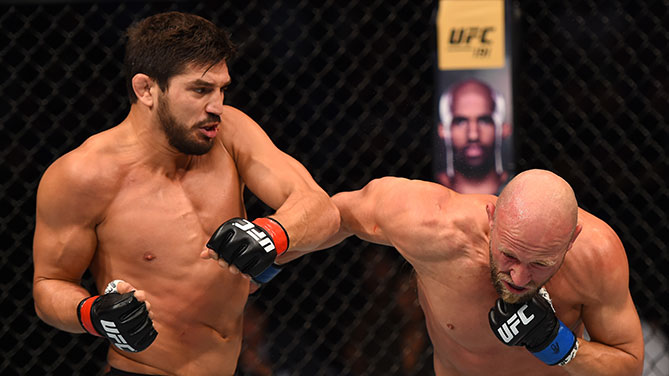 Two 35-year-old veterans fought like 25-year-olds for nearly three rounds, as Patrick Cote and Josh Burkman showed off a wide array of skills in a thrilling battle that ended up with Cote winning via third-round TKO.

Burkman’s striking looked better than it has in a long time as the bout opened, and he tagged Cote with several hard shots, prompting Cote to try his luck in the grappling realm, where he had some success wearing his foe down, but not getting him to the canvas. In the final minute, Cote landed his best shot of the fight, a hard left hook, but Burkman shook it off. He didn’t have as much luck with a Cote right hand that wobbled him and had him in trouble just before the round ended.

Cote roared out of his corner for Round 2 and was clearly in control of the action with his striking, but with a little over two minutes left, Burkman turned the tables briefly with a takedown. The two rose quickly and traded hard right hands before Burkman turned away a Cote takedown attempt.

A slugfest broke out as Round 3 began, Burkman on the attack, and Cote firing back eagerly. The Utah veteran was holding the edge as the round progressed, but in the second minute, Cote dropped Burkman hard to the mat with a right hand. “The Predator” went on the attack with a barrage of blows, and while referee Jerin Valel gave Burkman every chance to recover, eventually he was forced to stop the fight at 1:26 of the final round.

With the win, Montreal’s Cote improves to 23-9; Burkman, who was knocked out for the first time in his career, falls to 28-12 with 1 NC.
More from Saskatoon: Postfight bonuses awarded | Holloway wins as injury halts Oliveira | Watch: Max Holloway backstage interview | Perez halts Stout, retires in Octagon | Fight Night results 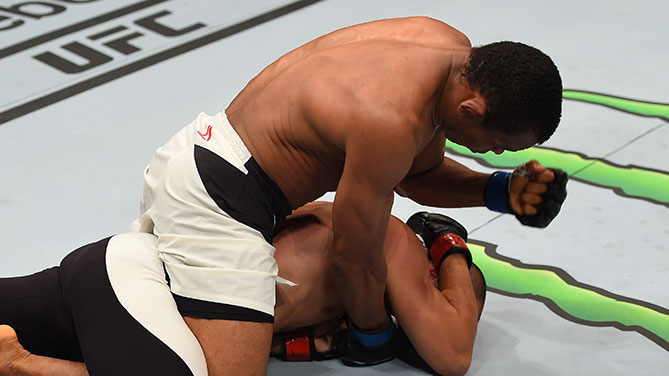 Brazilian veteran Francisco Trinaldo removed TUF Nations winner Chad Laprise from the ranks of the unbeaten in a lightweight upset, stopping the Canadian in the first round.

Laprise got off to a fast start, sticking and moving with quick punches and head kicks. Trinaldo worked to find his range, and with a little over three minutes left he did just that, dropping Laprise with a left hand. Laprise appeared to recover quickly, pulling guard to further clear his head, but as “Massaranduba” kept the heat on, he took Laprise’s back, flattened him out, and with a series of unanswered strikes, stopped him, with referee Herb Dean intervening at 2:43 of the opening stanza.

With the win, Brasilia’s Trinaldo, who has won four straight, moves to 18-4; Montreal’s Laprise falls to 11-1. 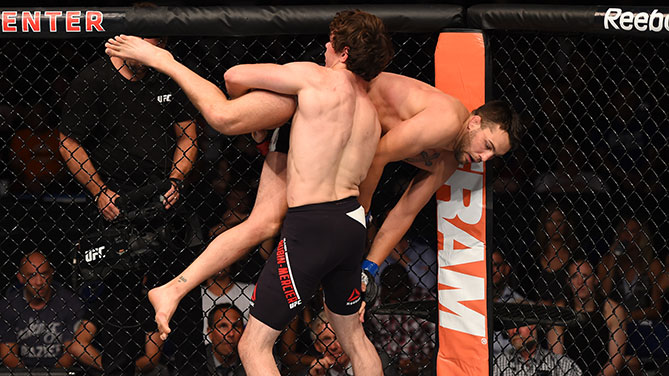 Aubin-Mercier’s first takedown attempt was a successful one, allowing the Montrealer to start working on the mat in the opening minute of the fight. Sims, who was a late replacement for the injured Chris Wade, fought his way up, only to be slammed down again. Aubin-Mercier took Sims’ back and went for the rear-naked choke. Sims escaped the attempt, but he was stuck in that position for the rest of the round, a dominant one for the Canadian.

There was more of the same in Round 2, as Aubin-Mercier (8-1) controlled the grappling exchanges, not allowing Sims (12-3) to get his offense in gear. The Coloradan did get in some good work in the final round in the form of ground strikes and a guillotine choke attempt, but OAM was never in trouble, and the closing stages of the bout were like most of the fight, Aubin-Mercier in complete control on the ground. 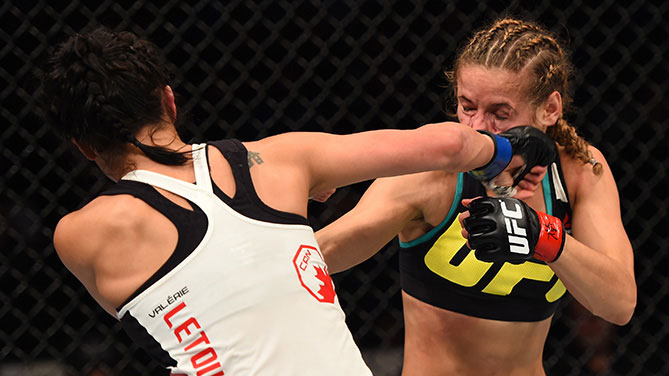 Moroz was the aggressor at the start, shooting out a stiff jab while trying to engage whenever possible. The veteran Letourneau didn’t back down, with a right hand just before the two-minute mark putting Moroz on the deck. Letourneau fired off hard strikes from the top position, but Moroz stayed cool as she sought daylight, remaining out of trouble, even though she wasn’t able to escape the bottom position.

Entering the second round for only the second time in her pro MMA career, Moroz showed no ill effects from the previous round’s action, as she again played the role of aggressor. Letourneau was less active, but she countered well, and when she landed, she got her opponent’s attention. With a little over a minute left, Moroz jarred Letourneau with a right hand and went on the attack, but after a few seconds, Letourneau was firing back, igniting the crowd.

The bout went to the mat early in Round 3, Letourneau on top as Moroz worked for an arm from the bottom. When that attempt came up empty, Letourneau was free to let loose with her strikes and she continued to pile up the points. Moroz did attempt a triangle choke, but Letourneau pulled free and the two stood, remaining there for the rest of the bout.