In the lead prelim bout, Chihuahua’s Rodriguez won an exciting three-rounder over Leonardo Morales to win the featherweight division of TUF LATAM.

In the second minute, Rodriguez got the fight to the mat and immediately took Morales’ back. Morales spun out of trouble but right into two armbar attempts. The Nicaraguan got out of trouble, and after a leglock attempt by Rodriguez, referee Mario Yamasaki restarted the fight for a fence grab by Morales. The stand-up action was fierce in spots, each man having his moments.

Rodriguez pulled ahead in the second with a variety of different attacks designed to end the bout, including a cartwheel kick into a heel hook, but Morales wouldn’t go away quietly.

The fighters kept it standing in the third, but an exchange of low kicks brought two brief stops to the action. When the fight was going on, Morales held a slight edge, but neither fighter was in serious trouble before the final horn sounded. 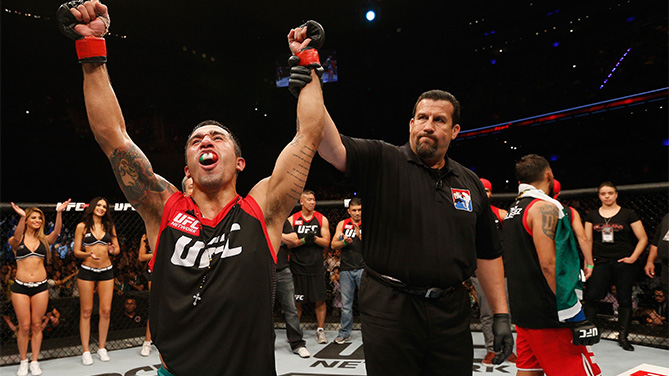 Quinonez (4-2) was the flashier of the two in the opening round, trying to mix things up in an attempt to keep Perez at bay, but it was the steady and more accurate Perez (16-5) who was in control in the first, with a few of his flush punches rocking his foe briefly.

The busy Quinonez got closer to his opponent in round two, keeping the pace high while Perez’ pressure remained steady.

With a UFC contract on the line, both fighters went after it in the third, Quinonez getting rocked, suplexed, and almost choked out in the early part of the round. Perez got free, cleared his head and went to work on submissions from the top position. As the two battled on the mat at the midway point, Quinonez headbutted Perez, both men getting cut in the process. Referee John McCarthy deducted two points from Quinonez for the intentional foul, leaving Quinonez in a position where he had to finish his opponent to win. And though he came close to sinking a guillotine choke in the final seconds, it was not to be.

It may have been an abbreviated finish due to a cut, but Cleveland’s Jessica Eye scored her first Octagon win in impressive fashion, halting Leslie Smith in the second round of their bantamweight bout.

Eye had a dominant first round, using her significant speed advantage to blast Smith with punch and kick combinations and cut her on the left ear. In the second though, the blood kept coming from Smith’s cauliflower ear, and after a visit from the Octagonside physician, the decision was made to halt the fight at 1:30 of the round. 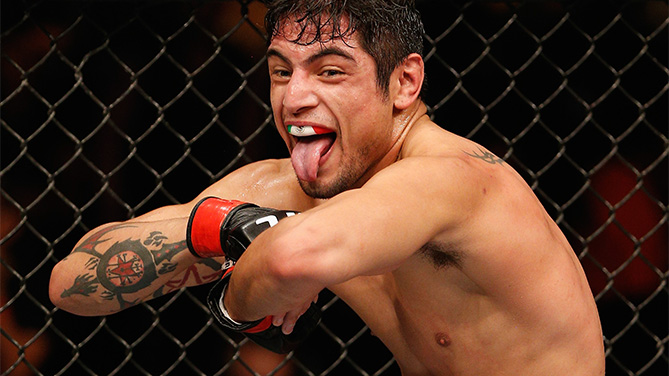 In a clash of TUF LATAM featherweight competitors, Mexico’s Gabriel Benitez submitted Panama’s Humberto Brown in the third round.

Brown was in trouble early, as a slam attempt was met with a tight guillotine choke. Brown escaped, only to have it happen a second time. But again, the Panama City native pulled free and proceeded to use his ground strikes to get on the board. With two minutes left, Benitez went for an armbar, only to see the resilient Brown find a way loose, prompting the two to rise. With under a minute left, a low blow by Brown brought a halt to the action, and when it resumed, it was another guillotine choke that was escaped by the Panamanian just before the bell.

A second low kick from Brown prompted a point deduction by referee Mario Yamasaki, and coupled with the Tijuana native’s ability to keep the fight standing and stay a step ahead in the striking department, it was a big two-point swing on the judges’ scorecards for him.

Showing a sense of urgency, Brown rushed Benitez as the final round opened, but as the two grappled against the fence, Benitez finally got the guillotine choke he wanted from the start, putting Brown to sleep at the 30-second mark. 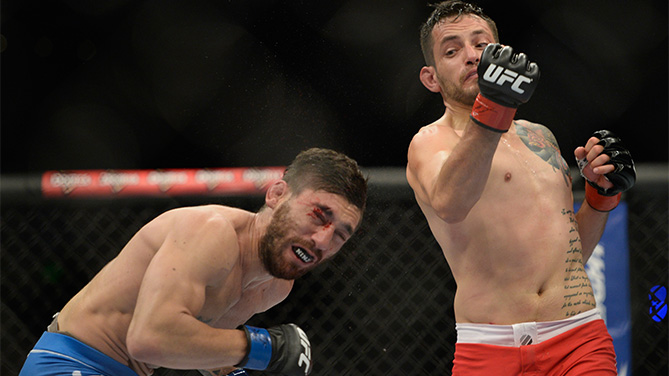 Team Velasquez’s Henry Briones scored a thrilling come from behind victory over Team Werdum’s Guido Cannetti, surviving a rough first round to submit his foe in the second.

Cannetti impressed from the start, using a varied striking attack to take the lead almost immediately. The ultra-tough Cannetti fired back each step of the way, but with under two minutes left, a series of kicks to the body hurt the Tijuana native on the right side. Briones survived the round, but not without enduring some serious punishment.

The second was an entirely different story though, as Briones stalked Cannetti, cut him, and then after the Buenos Aires native missed a left to the head, “Bure” jumped in with a flush right uppercut that dropped Cannetti. After a series of ground strikes, Briones sunk in a rear naked choke, and Cannetti tapped at the 1:44 mark. 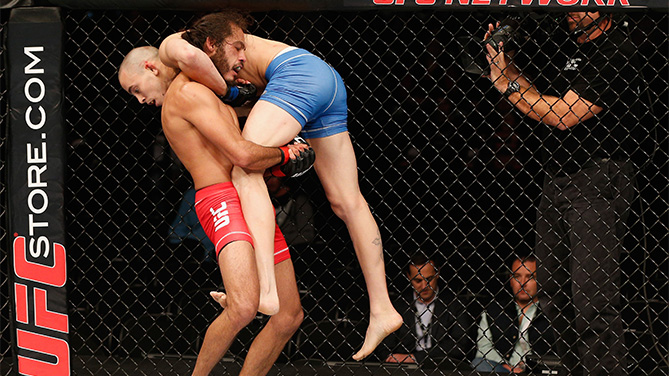 Mexico City’s Marco Beltran thrilled the fans in his hometown with a hard-fought three-round unanimous decision win over Ecuador’s Marlon Vera in the bantamweight opener.

The night got off to a fast-paced start thanks to the two bantamweights, Beltran winning the striking and positioning battle, but Vera doing good work from his back as he tried to lock in a series of submissions.

After getting a talking to from coach Greg Jackson between rounds, Vera took matters into his own hands in round two, dumping Beltran to the deck and moving quickly into the mount. Soon he took his foe’s back and nearly sunk in a rear naked choke, but Beltran got loose and reversed position, drawing a roar from the crowd. With a minute left, Beltran got into full mount and fired off ground strikes, giving the judges an interesting scoring dilemma.

Vera roared into gear again in the third, with his striking and submission attempts dominating the action, but he wasn’t able to finish his foe, and it ultimately cost him the fight.