CINCINNATI, May 10 – Some fighters talk about always wanting to finish their opponents. Saturday night at U.S. Bank Arena, Ohio's own Matt Brown went above and beyond the call of duty in that attempt against Erick Silva, finally stopping the ultra-courageous Brazilian in the third round of their thrilling Fight of the Year candidate, in the process making a rock-solid case for a shot at Johny Hendricks’ UFC welterweight title.

“Cincinnati, Ohio, who do you want to see fight for a title next?” asked Columbus' Brown, who has now won seven straight, six by knockout.

The answer from the crowd was “YOU,” and it’s hard to argue with that logic.

After a nose to nose staredown during referee Herb Dean’s instructions, Brown went right after Silva with a high kick but wasn’t able to land. Silva tried to respond with a slam, but both fighters went tumbling to the mat. Silva kept the pressure on, dropping Brown with a kick to the body. The end looked to be near as Silva unleashed punch after punch, but Brown survived the assault. He wasn’t able to get off the mat though, and Silva took his back and tried to sink in a rear naked choke. Again, Brown survived, and with two minutes left he got to his feet and chased after Silva with punches, kicks, elbows, and knees, putting the Brazilian in deep trouble. Silva courageously hung in there, even after getting thrown twice to the canvas, and in the final minute he even began throwing back at Brown before being taken down in the closing seconds. 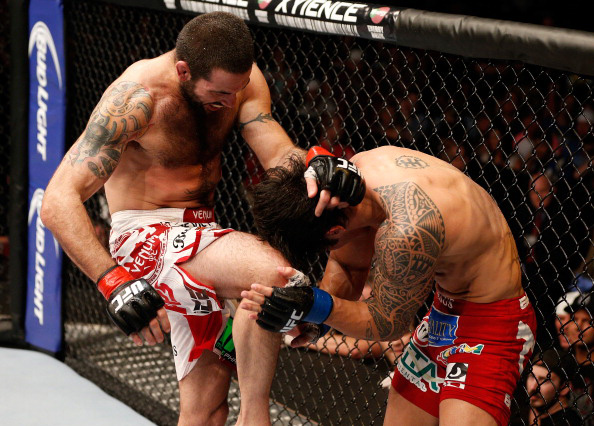 With it being almost impossible to match the action of the first round, both Brown and Silva did their best to top it in the second, with Brown leaving nothing in the tank as he tried to finish. Silva would stagger but not fall, and his body kicks were still getting Brown’s attention. But it was “The Immortal” leading this dance, and he was letting loose with whatever weapons he had at his disposal in an effort to take out his foe. Midway through the round, Brown took the fight to the canvas and drilled Silva with strikes from side control. When he felt he had punished Silva enough, he tried to lock in a choke and when that didn’t work fast enough, he moved into the mount and threw more strikes. Two more submission attempts followed, but Silva, finding more escapes than Houdini, got loose and made it to the bell.

Showing almost inhuman intensity, Brown kept trying to end the fight with each strike that he threw as the third round opened, and almost as remarkable was Silva’s ability to take everything that came his way. But finally, after a Brown takedown and a ferocious ground and pound assault, the now bloodied Silva had taken enough, with referee Herb Dean intervening at the 2:11 mark.

With the win, Brown, who received his jiu-jitsu brown belt after the bout, improves to 21-11; Vila Vehla’s Silva, now 16-5 with 1 NC, was removed from the Octagon on a stretcher as a precautionary measure.

New York middleweight contender Costas Philippou had a good night in Cincinnati, snapping a two-fight losing streak with a first round knockout of Lorenz Larkin.

There was no feeling out process with these two middleweight sluggers, as both Larkin and Philippou looked for the quick finish. After this early flurry of activity, Philippou tried to muscle Larkin against the cage, but once Larkin got loose, it was “The Monsoon” landing the harder and more frequent blows. Philippou was getting his shots in though, and eventually, he struck with a left hook that set up a flush straight right up the middle. Upon impact, Larkin dropped to the deck and that was all she wrote, with referee Keith Peterson stepping in to stop the match at the 3:47 mark.

Daron Cruickshank picked up the biggest win of his pro career and he did it emphatically, 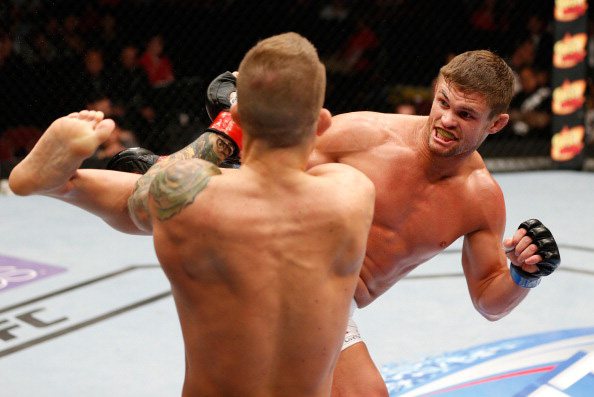 knocking out Erik Koch in the first round of their lightweight bout.

Kicks were the order of the day for Cruickshank from the start, and while Koch aggressively pursued the Michigan native, the counters from “The Detroit Superstar” ruled the day, making it just a matter of time until he landed the big one, and eventually he did, scoring with a flush left kick to the head that put Koch down face first. Koch tried to get clear and get back in the fight, but Cruickshank wouldn’t let him off the hook, firing off punches until referee Gary Copeland stopped the fight at the 3:21 mark.

In a back-and-forth welterweight scrap, Neil Magny scored a three round unanimous decision win over the returning Tim Means.

Means and Magny fought a fast-paced first round, each getting their share of shots in as they spent the entire round on the feet. Means held the edge throughout much of the frame, though Magny rallied late.

The technical striking battle between the two 170-pounders continued in the second stanza, with Means again appearing to do just that little bit extra. A Magny takedown in the second half of the round didn’t hurt the Coloradan’s cause though, even if he wasn’t able to keep Means grounded for long.

In the final round, Means turned it up a notch and seemed to be on the verge of closing the show, but the resilient Magny refused to go away and he roared back. It was enough to change the outcome of the fight for the Ultimate Fighter 16 competitor, who picked up his second consecutive win.

Soa Palelei continued his UFC resurgence, nabbing his third consecutive Octagon victory with a first round finish of newcomer Ruan Potts in their heavyweight bout.

Potts (8-2) weathered Palelei’s initial storm, countering a takedown with a guillotine choke attempt. Even Palelei’s subsequent escape and move into the top position was greeted with another submission attempt. But as soon as Palelei (21-3) got into the mount seconds later, a single left was all it took for “The Hulk” to take the South African out, with referee Keith Peterson halting the bout at 2:20. 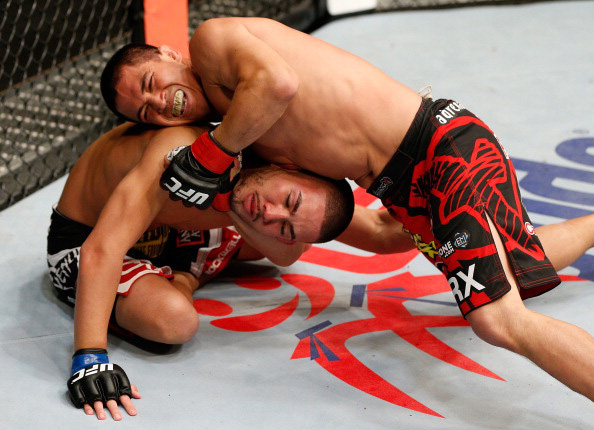 Both fighters had their moments in a competitive first round, but it was Cariaso who may have pulled ahead in the final seconds with a choke attempt that had Smolka in deep trouble.

Going on the attack as soon as the horn for the second round started, but it was Smolka who took the edge when the fight hit the mat, at least until Cariaso turned the tables and regained control before getting back to his feet, and again, it was a tight choke by the veteran that finished up the round and sent Smolka back to his corner.

Smolka rebounded in style in the third frame, getting mount briefly as he continued to keep the pressure on, with Cariaso eagerly staying in the fray when the two stood and exchanged. And while the third round action was the best of the fight, Cariaso’s work in the first two frames was enough for him to nab the close win.