Made For This - Pettis Begins Life After "The Kick"

"I think a lot of people are doubting that I should be here. So I want to prove that I belong here.” - Anthony Pettis 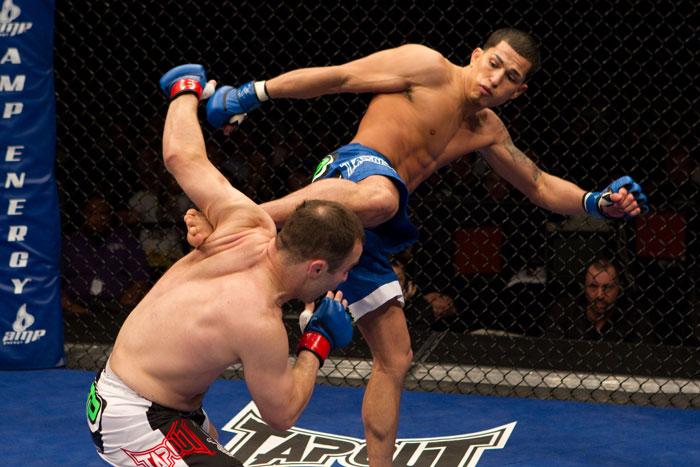 It’s a move stuck in an endless loop on any true mixed martial arts fan’s permanent highlight reel, and something that can’t be avoided in discussion with the young man who performed it. So, Anthony Pettis, are you tired of talking about what’s simply referred to as “The Kick”?

“I don’t think it’s ever gonna get old,” he laughs.

It’s certainly not gotten old watching him leap off the cage late in the fifth round of his WEC lightweight championship bout against Ben Henderson last December and nail the champion in the head with the gravity and belief defying kick that made him an instant star in the world of viral videos and quick-cut highlight clips. The maneuver was so good that it practically overshadowed his impressive performance in beating Henderson via five round decision for the 155-pound belt, at least to casual fans.

“I think to the newer fans that have just been exposed to me, yeah, definitely, most people remember me for the kick,” he said. “But I think guys that have seen my career and seen where I was at and where I’m going, I think it just added to it.”

As soon as Pettis hit the WEC in 2009, he looked like something special when the bell rang. He submitted Mike Campbell in his first bout, and after a hiccup in the form of a split decision defeat against veteran Bart Palaszewski, he went on a four fight tear that culminated in his title-winning effort against Henderson.

That was inside the cage.

Outside of it, the proud Milwaukee native has a quiet charisma and a compelling back story, both of which were displayed to the world last year when he was the subject of MTV’s documentary series “World of Jenks.”

Throw the fact that he’s only 24 years old into the mix, and while it’s great to see a young phenom make his mark, it could also be a recipe for disaster if he can’t handle life in the spotlight. Pettis has taken it all in like a pro though.

“It’s very difficult,” he admits. “There’s so many opportunities for me to just believe the hype. Everybody’s telling me ‘you’re the best, you’re the greatest, you’re gonna be lightweight champion,’ and it’s so easy to play into that and believe the hype, but I know what it took to get me where I’m at and it’s gonna take even more to get to where I want to be. So I just stay focused and keep doing what I’ve been doing and I think it’s gonna pay off.”

His first chance to cash in comes this Saturday, when he takes on perennial contender Clay Guida in one of the most highly-anticipated bouts of the year. Pettis’ UFC debut was supposed to be against the winner of January’s Frankie Edgar vs. Gray Maynard title fight, but that plan went out the window when the two fought to a draw and then were scheduled for an immediate rematch, which got scrapped when both fighters got injured. That left Pettis as the odd man out, and not willing to wait for Edgar and Maynard to settle their business, he stepped up to face Guida.

Along the way, he’s taken some jabs from his fellow fighters, the fans, and the media, wondering why he was being given a UFC title shot in the first place. But the facts have never gotten in the way of a good story, so what’s conveniently been forgotten is that Pettis didn’t lobby for a title shot; it was part of the deal for the winner of the WEC’s last lightweight title fight. He was the winner, hence a title shot.

“I didn’t ask for a title shot, I didn’t say ‘hey, the WEC should merge,’” said Pettis. “All that was even before I won the title. I was just focused on getting that title, and now that I’m here, I think a lot of people are doubting that I should be here. So I want to prove that I belong here.”

Pettis is one of the last remaining standouts from the organization which put the lighter weight classes on center stage to make his UFC debut, but his comrades have been lighting things up in the Octagon thus far, paving the way for Pettis to now do his thing.

“I said it even before we merged that the WEC guys at 155 were more entertaining and more dynamic fighters,” he said. “A lot of the top level UFC guys were just wrestlers that liked to grind you out and finish guys that way. The WEC guys are versatile. Ben Henderson, Donald Cerrone, Shane Roller, Anthony Njokuani, there are a lot of good guys that bring a lot to the table. So I knew my level of competition in the WEC was high, and these guys winning (in the UFC) just proves that fact.”

You couldn’t get more dynamic than “The Kick” though, and he can win a UFC title and reign for 10 years and people will always use that highlight as a touchstone when it comes to Pettis. So how much do you have to practice that to get it to the point where you’re willing to try it in a fight?

“We didn’t practice it really, really hard where we expected to throw it,” he said. “It was just one of those things we played around with. I did it when I was having fun sparring, and that’s when the crazy things happen. When I’m having fun in there and I feel comfortable, I can do anything I want. So I didn’t practice it a lot; it was just one of those things I had fun with and played around with.”

And when the opening came, he figured out the distance needed, set it up and went for it, right?

“I wish it was like that, but it wasn’t,” he laughs. “My body went on zombie mode and it just happened, I can’t even explain it. Even after it happened, I’m like, ‘I just landed that kick? Wow.’”

That was the reaction of everyone who saw it, and while you can probably guarantee that it won’t happen again this weekend, he does claim to have some more wild tricks up his sleeve.

“It’s gonna be hard to top, but I got a lot of crazy moves. That’s just one of the kicks in my arsenal. I’ve got a lot of things that I practice and play around with and I do, and if I feel comfortable in there, you’re definitely gonna see one.”

Guida doesn’t go for making opponents feel comfortable in the Octagon. In fact, it’s the opposite, as “The Carpenter” likes nothing better than making his foes feel miserable for 15 minutes or less. Pettis is cool with that, and he’s expecting a long night.

“I always prepare for the worst and expect the best,” he said. “For me it comes down to just doing what I do best. I can’t get into the hype and think ‘oh my God, he’s gonna take me down and he’s gonna hold me down for 15 minutes.’ I gotta focus on my gameplan, know what I bring to the cage, and just take advantage of his weaknesses.”

As for his foe’s wild dervish-like attack, complete with hair and sweat flying in all directions?

“You just gotta aim for the middle,” laughs Pettis. “The thing is, you don’t know what style he’s gonna bring. He can come as the composed Clay Guida, where he doesn’t really move around and he looks for that shot and grinds you against the fence. Or he can come all wild, throwing those wild punches and those wild kicks. In MMA, anything can happen. A striker can get knocked out by a wrestler, and a wrestler could get submitted or taken down by a striker. So with a guy like Clay Guida, you just gotta be ready for everything and anything.”

Anthony Pettis is ready. He’s been ready for a while now, waiting to showcase himself on mixed martial arts’ biggest stage. It’s almost like he’s been made for this and he knows it. Now he has to convince the rest of the UFC lightweights.

“I hope Clay comes a hundred percent,” he said. “I’m tired of guys doubting my skill level and who think I’m not supposed to be where I’m at right now. So I want to get in there and prove a point and show these other lightweights that I’m here to stay.”