Brazilian Jiu-Jitsu Ace Has Ambitions That Go Beyond The Strawweight Strap
By Steve Latrell, on Twitter: @TheUFSteve • Dec. 10, 2020

It was just three months ago that Mackenzie Dern notched her latest first-round submission victory over established veteran Randa Markos. Backstage that evening, I told her that she made it look easy. She smiled, and as modestly as she could, admitted that…it kind of was.

“When I was on the ground, it was almost like being in a jiu-jitsu tournament,” she beamed, recalling her formative years under father/coach/BJJ legend Megaton Dias. “I threw maybe five or six punches in the whole fight. It was my home, so it definitely felt kind of easy on the ground. I started jiu-jitsu when I was three years old, so the girls are going to have to do a lot of jiu-jitsu to get to the same [level].”

When you’re a black belt in BJJ with the kind of pedigree Dern boasts, things are bound to come easy on the ground. But things get complicated when you meet an opponent with a nearly identical skill set and passion, like she does when she meets Virna Jandiroba this Saturday at UFC 256.

“I’m definitely excited for this fight, and I think the fact that she’s a jiu-jitsu girl like me, it’s a good opportunity to show a little more of what we have as fighters. People kind of have this idea of me as one of the best women’s jiu-jitsu fighters in the UFC, and I know she’s kind of in the running for that too, so I think it’s kind of cool to see who will take it out of me and her. We’re both ranked, we’re both trying to break the top 10, and I think it’s going to be a great fight.”

That’s practically a given. But far from just putting on a skills showcase with an equally adept peer, Dern is bent on showing that her talents are a cut above.

“My idea is definitely to show that I am top 10, top five material. I’ve been working hard for that, especially after the pregnancy and I stayed one year off.”

After a promising 2-0 start in her UFC career that had some whispering things like the “next Ronda Rousey,” Dern put her career on hold to welcome her baby Moa in June 2019. Gamely, she somehow fought later that year and suffered her only professional defeat to date against Amanda Ribas. Undeterred, she went back to the drawing board and returned with back-to-back first round finishes of Hannah Cifers and Markos, both of which earned her Performance of the Night honors. 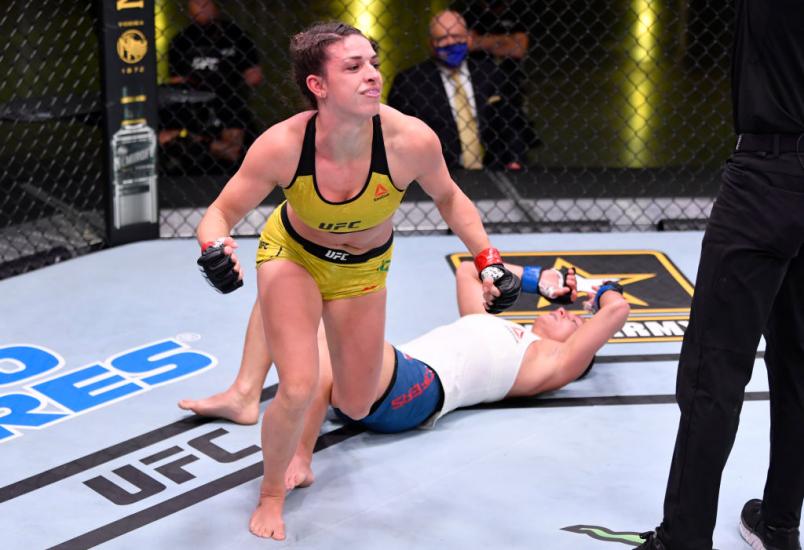 Celebrating the finish of Cifers, May 30, 2020 in Las Vegas, Nevada. (Photo by Jeff Bottari/Zuffa LLC)

“Now I don’t feel like I’m trying to catch up,” she explains. “Now I feel like I’m ahead. I definitely want to show that I’m next level now.”

It might sound strange going into a BJJ duel, but Dern has been spending a huge chunk of time on boxing this camp.

“I think this fight has a lot of potential to have a knockout, just because we’re both jiu-jitsu girls. I think anything is possible.” 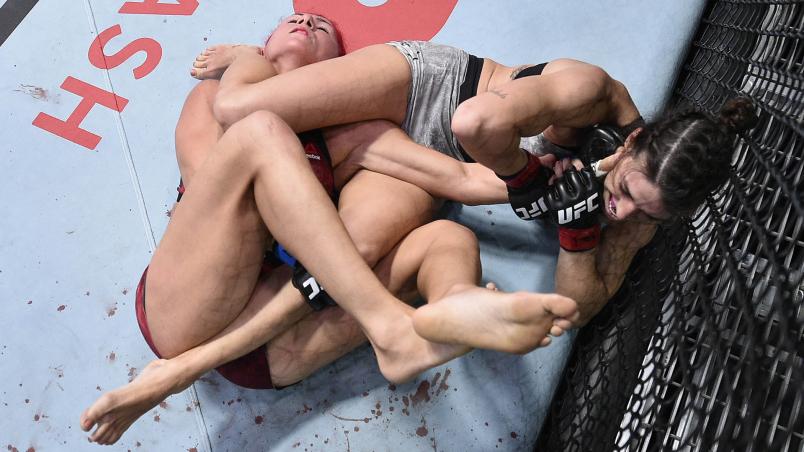 We’ll have to take her word for it, even if it seems counterintuitive. But as she told me back in September and reiterated this week, she’s got the BJJ part handled. If she can evolve the rest of her MMA game to even half that prowess? Look out.

“I think jiu-jitsu is the hardest part for my game to get better, but with the striking I can see the improvement. When I was competing in jiu-jitsu and doing MMA, I felt my jiu-jitsu was at the best level because I was competing with the best black belts. Now that I’m not active in jiu-jitsu tournaments, it’s kind of hard to keep that jiu-jitsu evolving. I think having my hands be dangerous is what’s making my submissions so clean. If people think about my standup, the submissions come way easier.” 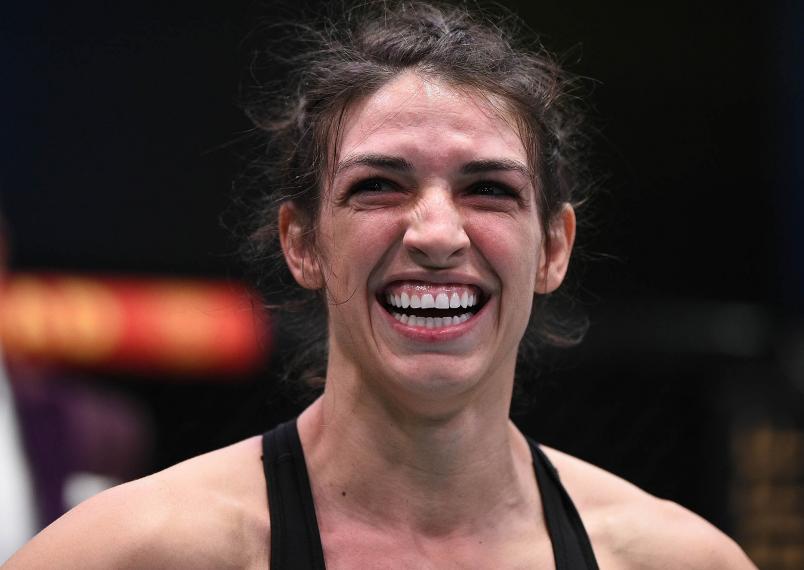 Mackenzie Dern celebrates after her submission victory over Randa Markos of Iraq in their strawweight bout during the UFC Fight Night event at UFC APEX on September 19, 2020 in Las Vegas, Nevada. (Photo by Chris Unger/Zuffa LLC)

“I definitely think she’ll keep it on the feet a little bit,” Dern says, suspecting that her opponent will employ a similar surprise on Saturday. “I think we’re going to go to the ground no matter what…but I see it more in the second or third (round). I think we’re both training to be great fighters; at least I know I’m training to be well-rounded. And I think this is the perfect fight for me to show a little bit of my tools that I’ve been working on, and I think her too, from what she’s been saying.”

A dominant win would certainly push her closer to her chance at the coveted UFC gold, but Dern’s long-term aspirations are much larger than the strap itself.

“To be a legend in the UFC,” she says plainly. “Getting punched in the face, yes, this is fun for me. I like fighting. I think I’m meant to fight. But I’m really just trying to not be forgotten. I don’t want to go through all of this, and then when I stop, people forget who you are. I’m really trying to leave a legacy; inspire my daughter, inspire women, and really try to represent jiu-jitsu on this big platform.”