In 2020 Mackenzie Dern Turned The Corner, She Racked Up Three Consecutive Wins And Showed Growth In Every Aspect Of Her Game. Next Up Is A Crack At The Top 10.
By Gavin Porter, on Twitter: @PorterUFCnews • Apr. 8, 2021

Busted up and moving forward, Mackenzie Dern was in a fight unlike anything she had experienced in the UFC.

The Brazilian jiu-jitsu prodigy found herself in an all-out standup brawl with Virna Jandiroba at UFC 256 last December. Her nose was bleeding, and she was taking damage, but that didn’t deter her from moving forward. Dern remained calm, and she showed people that no matter where the fight goes, she is going to use her greatest weapon – her heart.

“I think that [fight] was really good to show the rest of the division that if you try to have too much strategy you can still lose. In the end, it’s who wants it more, who has more heart, who keeps walking forward,” Dern told UFC.com. “I think it was good to show that my game is changing and it’s always good to have strategy, but I’m a fighter that has a lot of heart and that counts more than strategy and trying to win by points.

“Maybe they will think twice about what the best way to fight me is,” Dern added with a smile.

Dern’s unanimous decision win over Jandiroba was her third consecutive victory and set her up for a big fight to kick off 2021. That fight ended up being against Nina Nunes, who is returning to the Octagon for the first time since June 2019.

"A lot of women will be able to identify themselves with us."@MackenzieDern and Nina Ansaroff have the chance to inspire when they put their balance of motherhood and fighting on display at #UFCVegas23 🔊⬆️ pic.twitter.com/ctQdkZqtAO

Nunes, like Dern, took time away from competition to start a family, and now she’s ready to make that walk once again. Fighting another mom is something that Dern thinks is a good opportunity, for both herself and for Nunes to inspire other women around the world with their determination and passion.

“To be back so soon, I was happy to be able to show that, and when they offered me Nina I was like ‘Man! One more mom coming back pretty soon!’ She will be like six months, I think. And to be on ABC, it’s an open channel so I think women who don’t do MMA will see fighting in a different way, seeing these recent moms back in fighting at the highest level of MMA in the world,” Dern said. “It’s the elite level and we are getting punched in the face, punched in the body, kicked in the body and all these things. All of this besides all the training we put in to be at this level. I think a lot of women will be able to identify themselves with us and it will give them the courage to do everything they want in their life, if it’s MMA or their career or whatever.”

Dern recognizes that fighting on ABC is a great opportunity for exposure, and to help her rise to the top of the UFC’s strawweight division. Getting to the top has always been Dern’s goal, and she knew that in order to crack the Top 10, and eventually the Top 5, she would need to keep evolving her skill set.

“I think I was able to show different aspects of my style as a fighter and the growth that I was able to show from one fight to the next,” Dern said. “It was the biggest breaking point of my career and it set me on a place where people see me as a future champ. I think before with a bad weight cut, my pregnancy and my first loss, people kind of were like, ‘She’s in the UFC and she’s taking fights, but she doesn’t have what it takes.’” 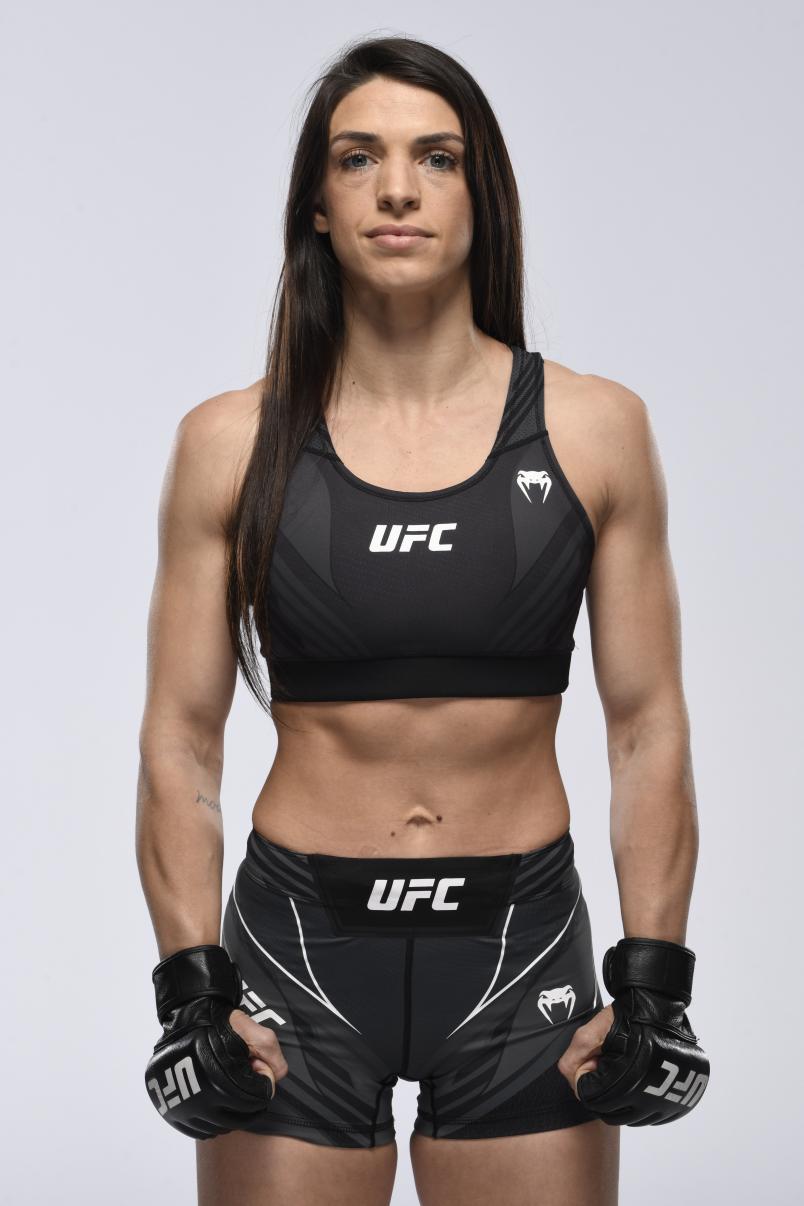 Mackenzie Dern poses for a portrait during a UFC photo session on April 7, 2021 in Las Vegas, Nevada. (Photo by Mike Roach/Zuffa LLC)

Yet Dern’s three wins since her lone defeat against Amanda Ribas turned heads, and she has noticed the transition in the public’s perception of her on her social media accounts.

“Now I see a difference in my social media. I post one video of a workout and the comments are completely different. People are like, ‘She’s going to a be a future champ’ and ‘Look how determined she is,’ and it’s really cool to see that the public is seeing that because that’s how I feel,” Dern said. “I feel like I’m really showing that I’m professional now and that I’m taking this to be big and not just one more fighter in the UFC. The turning point was just the constant evolution, and I think people like to see that each fight is different and I’m getting better and better instead of just staying the same.”

On Saturday, Dern has the opportunity to add to her win streak and to break into the Top 5 of the talent-rich UFC women’s strawweight division. Beating a tough and durable striker like Nunes won’t be an easy task. But Dern is confident that she can utilize her advantages to win the classic striker versus grappler matchup.

“For me, I prefer this type of matchup,” Dern said. “Striker against grappler, when the striker is more of a striker, they are like a fish out of water when they get to the ground. Nina isn’t a regular striker, though, her takedown defense is really good.”

The main challenge that Dern is preparing for is imposing her style of fight on Nunes and forcing the veteran to be uncomfortable. If she can do that, she can show the world that she’s not only progressed her game, but that she’s a true contender.