It’s been over a year since the last time Mackenzie Dern made the walk to the UFC Octagon. And when she makes that journey again on Saturday at UFC Tampa, she will have a completely different perspective.

That’s mainly because of Dern’s four-month-old daughter Moa, and how she’s impacted the strawweight prospect’s mentality going forward in her career.

“It’s like a totally 360-degree difference,” the 26-year old Dern said. “It’s a way bigger motivation now with Moa; everything is for her. Little things that would make me stress aren’t anything anymore. I’m way more patient and mature now.”

One thing that Dern isn’t worried about is the fabled “Octagon rust.”

“As of right now I feel better than before because I was missing being there [fighting for the UFC],” Dern said. “This ten months off, everything kind of started off new because I was like, ‘Man, I need to be in there now.’ So, I feel like I have more drive to be in there.”

That drive hasn’t always been there, as some of the pressure on Dern took away from her passion to fight. After missing weight in her last bout against Amanda Cooper, she felt she was overly focused on the scale and wasn’t able to enjoy the process that fight week and the fight itself offers.

“I was kind of fighting a little bit unmotivated,” she said. “The fans were very critical because of my last missed weight and it gets depressing a little bit. You love to fight but you want to like to be there.”

Now that she’s refreshed and had some time off, Dern’s motivation to fight is partly fueled by silencing the narrative of her previous battles with the scale. She wants to prove to people that she’s focused and a true professional.

“Yeah, I think the weight part is a big thing to prove,” Dern said. “They really want me to go to 125-lbs but I want to stay at 115-lbs. I missed weight by a lot in Brazil. Then when I became pregnant people were like, ‘Even less of chance she makes weight now,’ and they say, ‘The career is over, she’s not fighting anymore.’ So the weight thing is a big deal.”

On Saturday, Dern will be fighting Amanda Ribas, a Brazil native with excellent credentials in jiu-jitsu and judo. Ribas’ debut just over three months ago was capped off with a submission victory over Emily Whitmire. 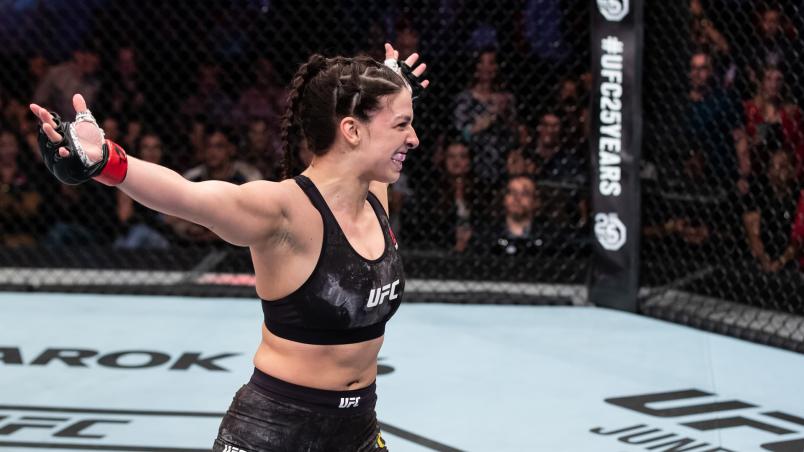 When Dern was given Ribas as an opponent, she went back and watched that fight and she was impressed with Ribas’ performance. The matchup excites her and she couldn’t be any more prepared to get in there and get to work.

“You’ll see an aggressive Mackenzie,” Dern said. “That’s my style and that’s my personality to be aggressive, and I’m not scared to stay standing up. Of course, I like to go to the ground too, but I think you’ll see, hopefully, a more mature fighter.”

Tune in for Dern’s return to the Octagon against Ribas on Saturday at UFC Tampa. The fight will be on the main card, which starts at 8pm/5pm ETPT. Get ESPN+ here.