After suffering her first pro loss in her last time out, Mackenzie Dern knows she doesn't want to experience that taste again.
By Gavin Porter, on Twitter: @PorterUFCnews • May. 29, 2020

When a fighter is handed their first defeat, it isn’t uncommon to see them make major changes in their preparation, style and mentality

Don’t expect Mackenzie Dern to make those widespread alterations to her game.

“After my loss in Tampa I felt like I did the best I could. I did the best I could in my preparation, I prepared really hard for the fight, especially since I came from a pregnancy and missing weight in my last fight in Rio,” she said. “I really tried to do my best, but I think just that Amanda [Ribas] was just better than me that night and she got the win. It wasn’t anything like I need to change this and this and this. I think the biggest lesson I learned was just not feeling the taste of a loss again because it just changes everything.”

That loss to Ribas came last October, and since then, Dern hasn’t let that night in Tampa haunt her one bit. She’s focused on her family and improving her skill set amidst the limitations that have popped up during the COVID-19 pandemic.

Dern has continued her training at Black House Academy in California, where she has been able to utilize an Octagon, private training partners and some equipment. One huge benefit to the scaled down training camp is that Dern has had the ability to stay close to home and close to her nearly one-year-old daughter, Moa.

That’s not the case for Dern now that she’s in Las Vegas for the UFC’s next event on May 30.

“I’ve never spent twenty-four hours away from her, let alone six straight days,” Dern said with a concerned laugh. “My husband says Moa is doing good. I think that I miss her way more than she misses me.”

On Saturday the 27-year-old will look to secure her third UFC victory when she takes on Hannah Cifers at the UFC Apex. It will be the latest UFC event without spectators, and that’s an experience Dern is interested in being a part of.

“I think the disadvantage for me is fighting without the fans because I always grow with the crowd and just knowing that everyone wants to see you lose or to see you win. You really want to prove yourself and your potential and everything,” Dern said. “You kind of feed off the energy and the adrenaline; I think when you don’t have too many fans it’s kind of hard to feel the adrenaline.”

But Dern also is keen to the idea of fighting in more of an intimate environment, where she will have nothing to focus on but Cifers. 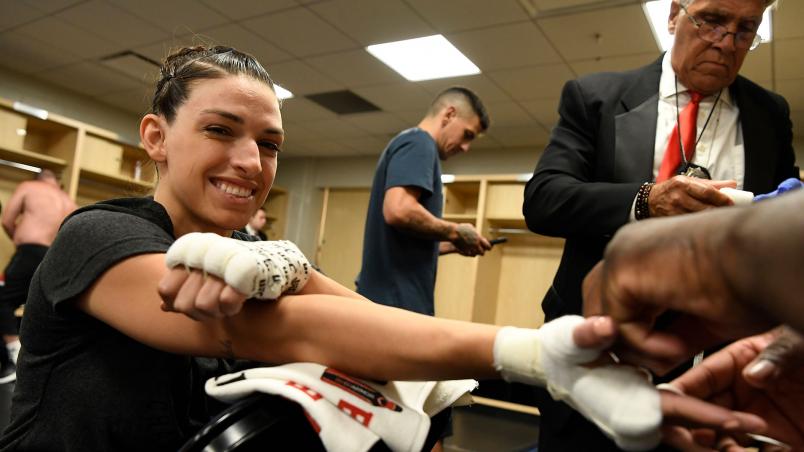 “From what people say, you can hear the other corners, you can hear the commentators, you can sometimes change the way you’re thinking in the fight depending what they’re saying and maybe feel a little bit more connected to your opponent,” Dern said. “I’m excited to see if that is really how it is, feeling more connected with Hannah and seeing how she’s feeling and what her ideas are during the fight. Hopefully that’s the good thing.”

As for the matchup with “Shockwave,” Dern is the first to point out how tough and durable North Carolina’s Cifers is.

“I know she is a tough girl; if I get a submission or something she’s going to be really tough to submit, so I’m prepared to put in a lot of energy and try and get the best positions and try to not let her get so confident,” Dern said. “From the fights I’ve seen when she gets a lot of confidence, she’s hard to stop and I think it will be a really good fight.”

Cifers is coming off a loss to Angela Hill at UFC Raleigh back in early 2020, putting her at an even 2-2 since joining the promotion. And while she has shown flashes of brilliance, Dern believes that there is a clear area for her to take the fight on Saturday.

“What I see from Hannah is that she is a tough girl and she is good at brawling and has a strong right hand. I think that her takedown defense and her ground game isn’t her best point; I think that it’s one of her weaknesses,” Dern said. “For sure, I definitely don’t want to be exchanging this fight standing up; I want to take it to the ground, where I’m safe and I know I’m the superior ground fighter.”

Regardless of where the fight goes, Dern intends to prove that she can not only overcome the adversity of her first loss but remind the world of why there was so much hype behind her.

“I have all the potential to be the champion; I just need the opportunity to fight.”