The Brazilian Jiu-Jitsu Black Belt Has Her Sights Set On Obtaining An Impressive Victory Over Xiaonan Yan At UFC Fight Night: Dern vs Yan
By Thomas Gerbasi, on Twitter @TGerbasi • Sep. 28, 2022

Only Mackenzie Dern can smile from ear to ear while proclaiming that she is going to be mean for this Saturday’s main event against fellow strawweight contender Yan Xiaonan in Las Vegas, but she knows that to make a statement and get in the title conversation at 115 pounds, she can be respectful before and after the fight, but not during it.

“I’m coming in mean for this fight,” said Dern. “I know as I get higher in the ranks and I see how these girls are tough and how they’re not gonna just tap, I’m really gonna have to take the submission home.”

This attitude comes in the aftermath of Dern’s April bout with Tecia Torres, where the decorated Brazilian Jiu-Jitsu black belt scored the biggest win of her career, but it came via split decision, not by submission after she had Torres in trouble in the second round. The victory showed the continued evolution of Dern’s game and her ability to gut out a win, but she sees this weekend’s bout as an opportunity to remind Yan and the world just how dangerous she is if the fight hits the mat.

“I think Yan should really respect my skills,” Dern said. “It’s not a game, it’s not a place anyone wants to be, having fun down there. If you’re on the ground, it can be over fast.”

Then a smile, making one wonder just how the 29-year-old will bring out the mean when the Octagon door shuts, but considering that she’s putting her number five ranking on the line against Yan’s number six spot in the strawweight division, stakes are high in an ever-changing weight class. 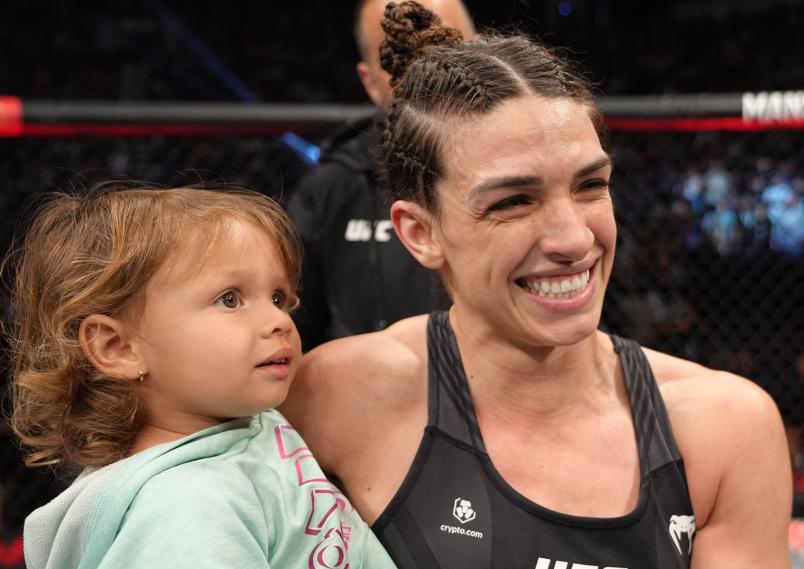 Mackenzie Dern reacts after her victory over Tecia Torres in their strawweight fight during the UFC 273 event at VyStar Veterans Memorial Arena on April 09, 2022 in Jacksonville, Florida. (Photo by Jeff Bottari/Zuffa LLC)

“I think this is really where I should be fighting,” said Dern. “That’s what’s going to push me to be the best I can be. I never fought someone with the same style as Yan, so this fight’s so important. A good win can really set me up for potentially the next title fight."

When Dern talks about the belt, her usually sunny disposition gets even brighter, and after winning seven of her first nine UFC bouts, with the only losses coming via decision to Amanda Ribas and Marina Rodriguez, it’s clear that she may be just one big performance away from being mentioned as an opponent for the winner of November’s title fight between champion Carla Esparza and former champ Zhang Weili.

“I want to fight for the belt so bad,” said Dern. “This is my dream to be the UFC champion, so every fight up until then is a battle, but it’s one more battle in the war, and the war is to be the champion and I know I’m going to be able to fight and win the war. And once I get the belt, it’s going to be a whole other story – my whole training, everything’s gonna change after that. So each fight I try and take as a title fight, but I know that when it is a title fight, it’s gonna be a whole new story. This is all just preparation to get there.”

And the way Dern sees it – respectfully, of course – Yan is the perfect foe for her to make that statement against.

“I asked for this fight because I think it’s the fight that makes the most sense,” said Dern. “Yan lost to Marina, I lost to Marina, and, honestly, after her fight with Carla Esparza, she got taken down and I saw a lot of weaknesses in her ground game, I thought that this was a great fight for me. Of course, I know that she’s gonna come back and train and get better and fix all of her things, but for me, this is the fight that makes the most sense and I think this is a good matchup for me and my style.”

On paper, it is, especially with Yan coming off a pair of defeats to Esparza and Rodriguez. But fights aren’t won on paper, and with Yan hungry to get back in the win column and knowing what she’s up against in Dern, this could turn into a war of attrition. But that’s okay, because Dern is ready for anything.

“I’m hoping to beat Yan by submission and get a Performance of the Night,” she said. “Get in, get out, be able to stop her game completely and not give her too much space to get off too many numbers with striking and really just finish the fight without getting too injured and be able to fight again as soon as possible. But she’s ready to be in a dogfight, and me, as a grappler, that’s the best style for me.”