Maciej Jewtuszko: The Pride of Poland

"I have to be myself, aggressive and unpredictable, the usual Maciej. I’m 100% ready; I hope Curt is ready to rumble."

Until now, Poland has been vastly under appreciated in MMA circles. But the central European nation is quietly emerging as a hotbed for the skyrocketing fight sport. Do not be surprised if, within the next few years, UFC president Dana White starts publicly referring to the land of potatoes, sausage and sauerkraut in the same glowing terms as fight-crazy nations such as the United States, Canada and Australia. Watch Maciej Jewtuszko's training blogs

My premonition, based on conversations with fighters and coaches with extensive involvement in Poland, is that the rabid fervor and fanaticism of Poland is a coming revelation that is going to blow a lot of people’s minds. When the UFC eventually hits Poland, expect to see the same rapid sellouts and frenzied fanbase that have been the hallmarks of established and recognized markets such as Toronto, Montreal and Sydney. 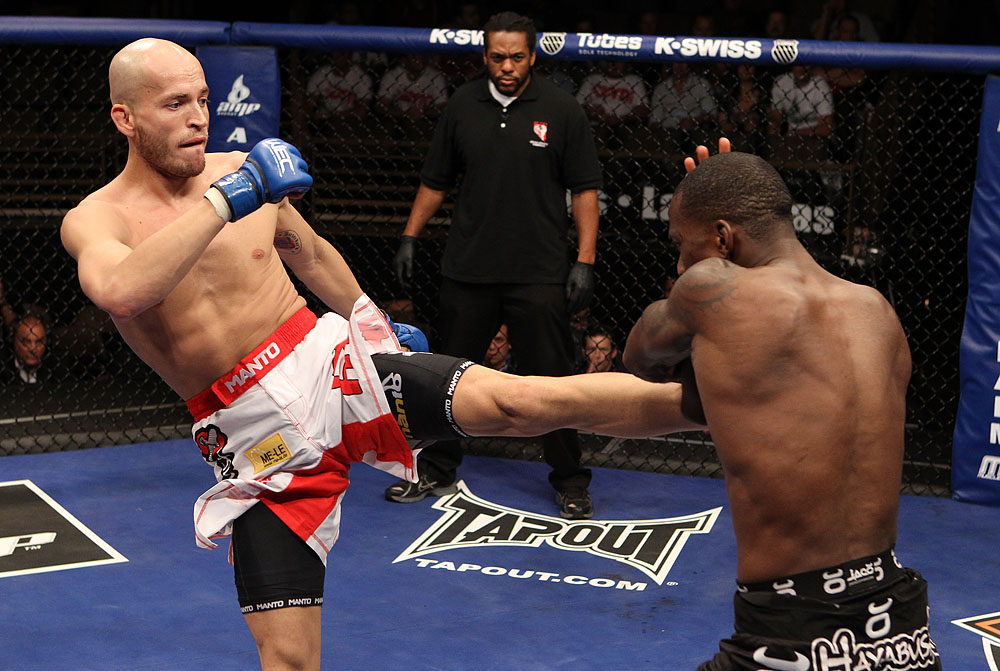 Having said that, hurdles remain for Poland to fulfill its huge but overshadowed potential. While the remarkably homogeneous population of 38 million people is overflowing with off-the-charts nationalistic pride similar to the Philippines, and is also rich with the same kind of tough-guy ethic that is prevalent in Australia, Poland still lacks the world-class MMA resources that can be found in the states, Brazil and Canada. Several Polish-born fighters, such as Bart Palaszewski and Krzysztof Soszynski, have fared well at the highest level of the sport, though they had relocated to North American cities at young ages and benefited from affiliations with top training camps. Tomasz Drwal, Polish born and bred, has also produced respectable performances inside of the Octagon. But perhaps none of those men is being watched as closely as a rising, homegrown product named Maciej Jewtuszko, a promising prospect with the best chance to inspire and uplift his nation.

Considered Poland’s top 155-pound prospect, the 27-year-old firefighter has done nothing to disappoint his countrymen, amassing a sterling 8-0 record. Nothing excites fans like a devastating knockout, and Jewtuszko has demonstrated plenty of pop, as he displayed during a stunning TKO upset of highly regarded lightweight Anthony Njokuani last year. All the more impressive – Jewtuszko accomplished the feat in his Zuffa debut with the WEC; imagine how he might perform when he begins to psychologically consider the Octagon his “home.”

“I'm sure 99 percent of fans didn't expect my win, but I was very confident that I could beat him,” Jewtuszko said through an English translator. “To win that KO of the Night bonus was awesome and certainly helped me to get recognized in the fight world. That fight was a milestone for my career and a great prelude to my future career overseas. It's also important to me because I come from a relatively small city in Poland which most people have never heard about. But with this first fight I won some new fans from all over the world.

“The Njokuani bout got 120,000 views in a few days on Youtube. When I came back from Las Vegas I was really surprised because all of the sudden random people on the street were approaching me and congratulating me on my fight.”

Jewtuszko returned home, despite his triumphant spirit, with a stronger sense of his weaknesses. His time in Las Vegas permitted him to study some of the world’s elite pros. The experience left an indelible impression: Some of the 145-pound fighters appeared bigger and stronger than him, even though Jewtuszko competes in the 155-pound division. It is a common trend: Most European fighters do not cut nearly as much weight as their American and Brazilian counterparts.

“I have put more emphasis on strength training and getting bigger,” Jewtuszko said. “I have also been training more wrestling, especially takedown defense.”

Eager for an encore performance, Jewtuszko was sidelined for nearly two months after breaking his hand while inadvertently striking a sparring partner’s elbow. Now fully recovered, his next assignment is England’s Curt “The War” Warburton at UFC 127 in Sydney.

“He's pretty well-rounded, a tough guy with good standup,” Jewtuszko said. “I'm confident though that I have tools to beat him, wherever the fight goes. I have to be myself, aggressive and unpredictable, the usual Maciej. I’m 100% ready; I hope Curt is ready to rumble.”

A sizable measure of Jewtuszko’s success is owed not to incredible athleticism or superb technique, but to his poise and natural instincts. The tall, lanky lightweight alluded to the sixth sense that has shadowed his career and helped him finish every fight inside of the distance.

“There will always be someone with better technique or physical abilities,” he said, “but I think that fighting instinct- knowing when to attack, getting into opponent's mind and doing right things at the right time -- is very important, too, and can be especially critical at this level of competition.”

Keenly aware of his status as a pioneer in his homeland, Jewtuszko believes his unblemished record will serve to embolden his opponents from this point on, not intimidate them.

“Everyone wants to be that first guy to beat an undefeated fighter,” he said. “I hate losing and I hope never to lose a fight. This show in Australia will be huge; it will be my first time in front of such a big, live audience but it doesn't make me nervous at all - it makes me happy and motivated. Being a professional MMA fighter and part of the UFC is the greatest adventure I could ever wish for, so at this point of my life I'm a very happy person.”