"I want to win all my fights. But I know a win over Gonzaga will put me up there, at least higher up in the top 10." - Stipe Miocic 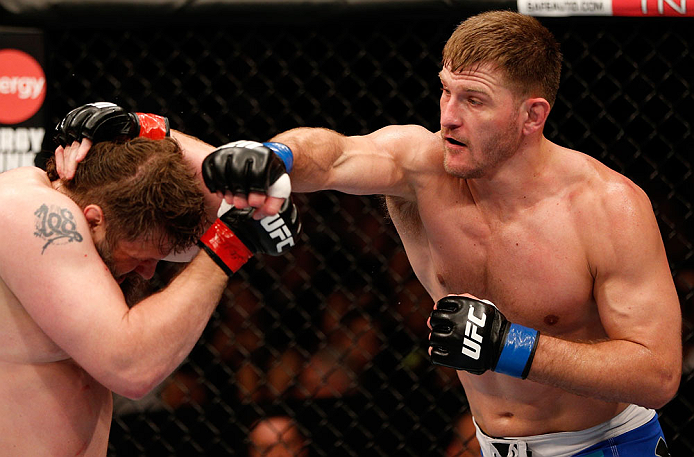 Stipe Miocic is little more than a week away from co-headlining UFC on FOX 10 on January 25 against a surging Gabriel “Napao” Gonzaga, and he just got off a 24 hour shift at the Cleveland area firehouse he works as a firefighter and emergency medical technician.

“I love putting out fires,” the Croatian-American says, followed by his trademark nervous laugh. “I love helping people. It does get tough to work a shift like that when I have a fight coming up, but the guys know I’m training and they push me to go even harder.”

Miocic entered the Octagon for the first time in 2011 at UFC 136 in Houston for an undercard bout against veteran Joey Beltran, winning via unanimous decision. He followed that impressive debut up with two more victories against Phil de Fries (by KO) and the late Shane del Rosario (via UD).

“I’m sad for Shane,” he said of del Rosario, who died after complications of a congenital heart condition last month. “I talked to him a lot after my fight. He was a good guy. My heart goes out to his family.”

The former Golden Gloves champion and two sport athlete at Cleveland State University dropped his next fight in Fight Of The Night fashion against Stefan Struve, but he rebounded to earn the biggest win of his career thus far, against Roy Nelson last June at UFC 161.

“Winning that fight was a great feeling. I knew I had to keep my attacks varied, and give him a lot of angles. He hits hard, like Beltran does,” he said with the laugh. “I know Gonzaga has a lot of power, and we know what he did against Cro Cop, so he’s got power everywhere on the feet, and he’s got really good jiu-jitsu.”

And while Gonzaga has seen his share of ups and downs in his UFC career, right now he is looking good. Since returning to the big show in 2012, he has gone four for five, with his one loss coming at the hands of current contender Travis Browne.

For Miocic, a win Saturday will set him up for even more high profile assignments in 2014.

“I want to win all my fights,” said Miocic. “But I know a win over Gonzaga will put me up there, at least higher up in the top 10. I don’t really know where it puts me, I just know a win is always better than a loss. I’ve had a long time to prepare for this fight. I have great coaches and they put together a good game plan, so wherever the fight goes I’ll be ready. I just have to do my fight first. I can’t get caught up in his game. I know he can stand and brawl but that’s not anything I’m looking to do in this fight.”

One advantage Miocic may have over Gonzaga is a less Octagon-weary physical condition. While “Napao” had four fights in 2013, Miocic had only one.

“There were a lot of reasons why I only had one fight last year,” he says. “Guys were injured or already booked. It happens a lot in this sport. I like to fight more often but the rest helps. I wanted this fight”

Much has been made of Miocic’s fighting style.  He is an excellent boxer with very good takedown defense, which will serve the 30-year-old well in avoiding Gonzaga’s slick ground game. And he moves really well for a heavyweight, which comes in handy when avoiding those big power shots that can end a fight in a second.

That said, Stipe isn’t necessarily afraid to go to the mats if that’s where the fight takes him.
“I have a really good jiu jitsu coach,” he says. “But my game plan is to keep the fight standing, that’s for sure. I want to knock him out.”

And while Stipe is excited to get back into the Octagon, he’s also looking forward to representing his hometown with his walkout song, “Cleveland,” by Machine Gun Kelly.

“It’s a great song man,” he said. “I love it. I wanted to use it last time but I didn’t get the clean version of the song in time. He’s from Cleveland so I gotta take care of him. I’m a happy guy. Why go through your whole life being pissed off at everything? I love to laugh and joke around in the gym and at work. But don’t get me wrong, when I walk into that cage I flip a different switch. That’s why it’s called fighting. He’s going to be in there punching me so I’m going to go in there and hurt him too.”