"You can’t leave it with the judges in the end. In my next fight, I’m going to finish the fight." - Lyoto Machida 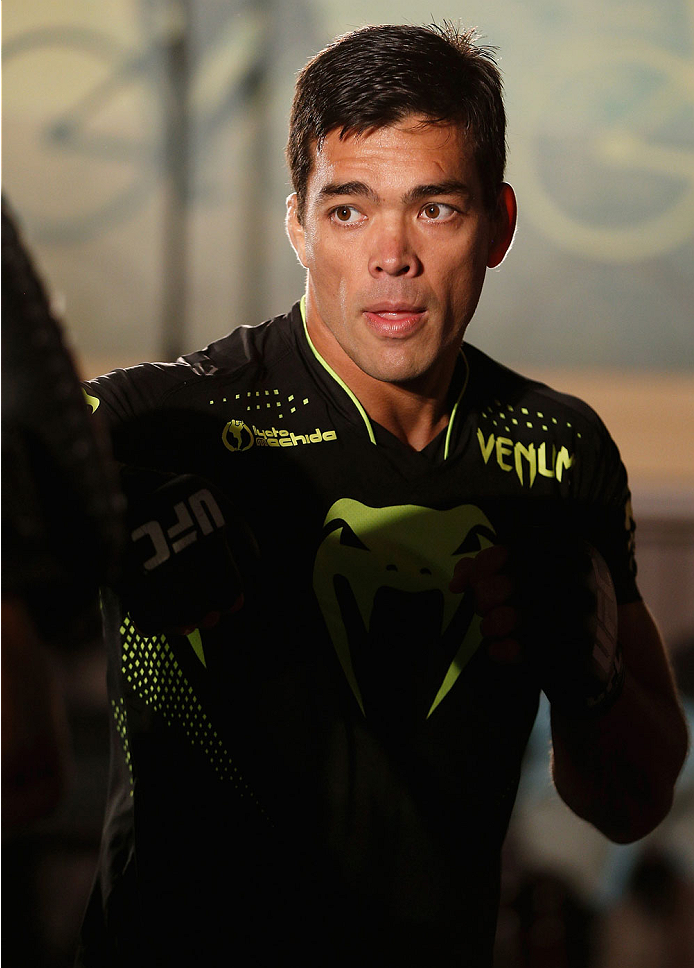 Sometimes you just need a change of scenery. For Lyoto Machida, that meant a 20 pound drop from light heavyweight to middleweight for Saturday’s UFC Fight Night main event against Mark Munoz.

“I always told the UFC that I would be interested in moving between weight classes,” said the former 205-pound champion. “I’m small for a light heavyweight and I could be a strong middleweight, so I was just waiting for an opportunity. And after my fight with Phil Davis, I had an opportunity to move down to middleweight and face Tim Kennedy, so I decided to jump on it.”

Tim Kennedy? If you haven’t been watching the MMA world turn, Munoz was scheduled to face Michael Bisping in Manchester this weekend, but “The Count” was forced out of the fight due to an eye injury. Machida, who was to face former Strikeforce star Kennedy in the Fight for the Troops main event in Kentucky on November 6th, got the call to step in and fight Munoz. The only problem, Munoz and Machida are friends and training partners. But when duty calls…

“The only thing that made me think twice about taking this fight was because it was against Mark Munoz,” said Machida. “I consider him a friend and we’ve trained a lot in the past. We even trained a few times for this camp, and we have the same jiu-jitsu coaches. I would have rather fought someone else, but at these times you have to be professional. I was called and he was called, so you have to take the fight.”

And though the Brazilian didn’t like the idea of facing a friend, in reality a win over a longtime contender and UFC name like Munoz will be a bigger statement for his middleweight debut, and stylistically, the aggression of “The Filipino Wrecking Machine” and the counterstriking brilliance of “The Dragon” could very well result in a fight fans will be talking about for a while. And maybe more than a win, that’s the kind of fight Machida needs, especially after two lackluster bouts against Dan Henderson and Phil Davis, one he won (Henderson) and one he lost (Davis).

“In my fight with Phil Davis I was happy with my performance, but I was unsatisfied with the result,” he said. “So that’s another proof that you can’t leave it with the judges in the end. In my next fight, I’m going to finish the fight.”

If Munoz charges and doesn’t succeed in closing the gap and getting a takedown, an explosive Machida finish is very possible. But if Munoz sticks to his pre-fight mantra of “controlled aggression” and fights more cautiously, will Machida press the action, or sit back and wait for a mistake, resulting in another distance fight?

“I think my style is not a style that’s favorable to decisions,” he said. “I think the judges are paying a lot of attention to takedowns, and I’m a guy who’s just there waiting for the right time to outstrike my opponent. I’m looking to engage him on my feet, and like my last opponent, he’s just trying to take me down at the end of the rounds, and how could he have won the round if I outstrike him the whole time and he takes me down at the end? I think I have to convince the judges more. I have to hit my opponents and make them fall, and even though you can’t do that sometimes, you have to be more convincing with the striking.”

It all sounds like the recipe for a “new” Machida at 185 pounds, and if he can bring his speed and power with him to middleweight, he may have even more success there than he did at 205 pounds.

“I feel that I’m going to be a force in the middleweight division because I was champion of the light heavyweight division, winning against guys who were bigger than me,” said the 35-year-old, who holds UFC wins over Henderson, Ryan Bader, Randy Couture, Shogun Rua, Rashad Evans, and Tito Ortiz, among others. “So I feel that if I can do the same thing against guys that are my size or maybe even smaller, I think I can do the same work that I did in the weight class above me in the weight class below.”

In fighting a friend, the first test may be the toughest one for Machida, but he’s already made peace with it. He will fight Munoz on Saturday, and he’ll be trying to finish the fight.

“The biggest proof I can give him of being a friend is to give him my best and not try to fake anything,” he said. “Just give everything I’ve got in there and be truthful. You have to separate the emotional side from the rational side. I hope he comes out there and gives his best, I’m going to give my best, and in the end, somebody will have to win.”