MacDonald fight can take 'Wonderboy' from good to great 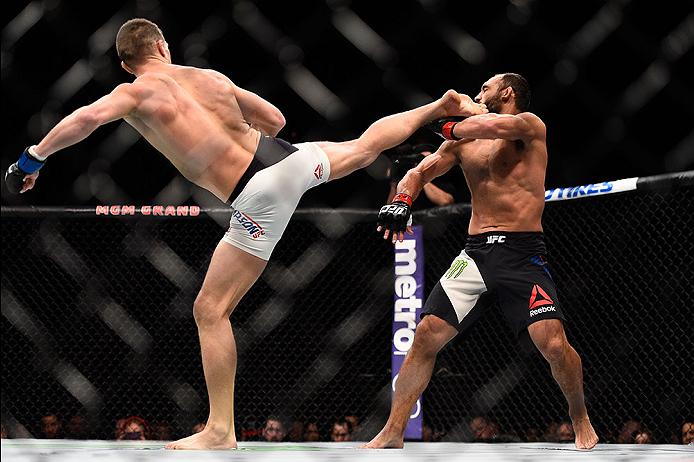 Anderson Silva vs. Chris Leben. Jon Jones vs. Stephan Bonnar. Georges St-Pierre vs. Karo Parisyan. All fights of varying importance in the great scheme of things, but every performance marked each of the victors as something special.

Stephen Thompson may have had that fight already, a first-round blast out of former world champion Johny Hendricks in February. And though his Saturday main event against Rory MacDonald could earn “Wonderboy” a welterweight title shot with a win, it was his knockout of “Bigg Rigg” that could one day be referred to as the tipping point when he went from good to great.

“I don’t think I’m there yet,” he said. “I know I can get better, I know I’m still improving in my wrestling, my jiu-jitsu, and even in my striking. For me to actually think that I am up there, I’ve got to get that belt. Once I get that belt, that would be a dream come true, but I know that I can keep getting better. It’s not gonna stop. I want to face the best, and I’ll be facing one of the best June 18th. He’s been at the top of the game for a long time.”

MacDonald, the No. 1-ranked contender at 170 pounds isn’t just an opponent, though. He’s also a friend. For some, that would be an issue. For Thompson and MacDonald, it’s not.

“You’re actually doing that every day when you’re sparring,” he said. “You’re out there and you’re beating up your buddies, and sometimes it can get a little emotional and heated, but I look at it as that. I’m sparring my buddies every day and I’m gonna go out there and spar with my buddy Rory, and it’s just gonna be with smaller gloves and we’ll be hitting each other a whole lot harder.”

Thompson laughs, knowing how such comments sound to those outside the fight game. But as long as he and MacDonald know what’s true, what else really matters? It’s a fight, they’re going to go at each other for 25 minutes or less, and when the dust settles, it will be back to normal.

“There’s not going to be any hard feelings,” Thompson said. “Let’s say he does go out there and win; he’s still gonna be my bud, and maybe we’ll even get some training in with each other after. We understand it’s business and I want to give him that because I know it will improve him and I know it will improve me as well. One of us is going to be moving up, and if it’s not me, what better guy than Rory?”

If the 33-year-old native of Simpsonville, South Carolina isn’t the nicest person in MMA, he’s certainly in the top five, but on fight night, he has no problem making opponents part of his highlight reel. That’s the fascinating dichotomy of this sport, and it’s also interesting to find out what goes through a fighter’s mind when watching a punishing five-round war like the one MacDonald and champion Robbie Lawler had in July of last year.
RELATED CONTENT: Open workout highlights | 'Wonderboy' from Karate Kid to Mixed Martial Artist | The rise of Thompson | GSP breaks down MacDonald vs Thompson | Both fighters ready for the shot

“When I was watching Rory’s fight, I’m just like, ‘Man, I would not want to be in there right now,’” Thompson laughs. “These guys were killing each other. Rory had a broken nose, Lawler had a big ol’ cut on his lip and that’s gotta suck. But some fights are like that.” s 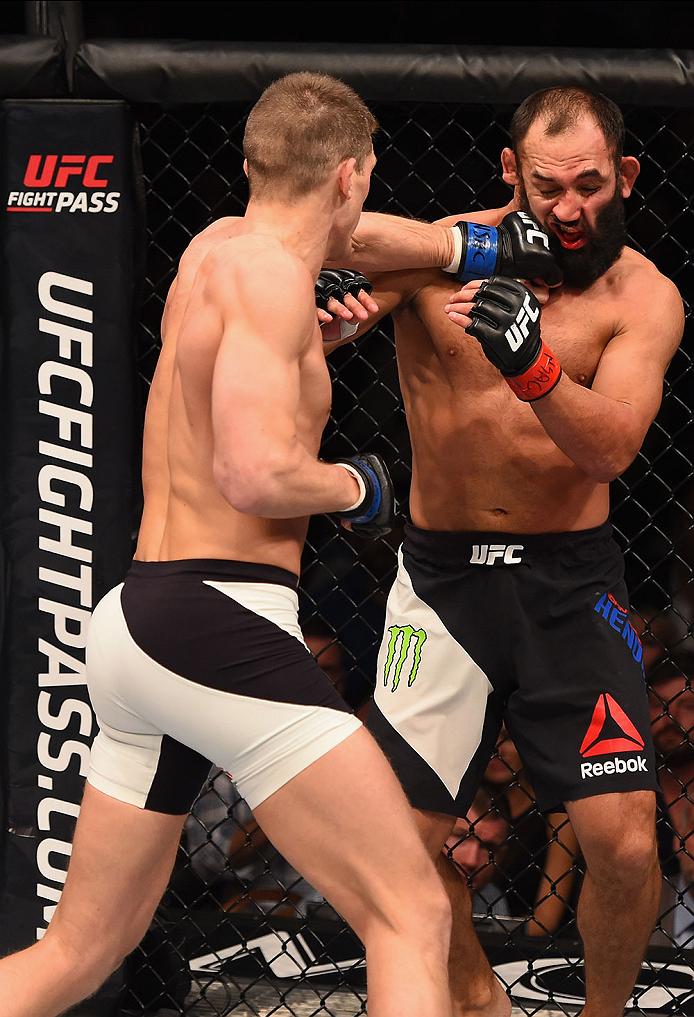 Thompson knows all about that. Sure, it’s nice to deliver devastating first-round knockouts like the ones he’s scored over Hendricks, Jake Ellenberger, Robert Whittaker and Dan Stittgen, and he admits with a laugh, “If it happens like that every time, I’m down for THAT,” but it’s fights like his lone pro loss against Matt Brown in 2012 that have helped make him the fighter he is today.

“When I fought Brown, it was like that and that’s when I learned the most about myself,” Thompson said. “Taking shots like that, most people would have given up, and I wasn’t having it. I was going to break his fist on my face if I had to. That’s the mentality you have to switch into sometimes. It’s war, man, and you’ve got to be prepared for that. I was done in the first round, I had no energy, and I’m like, ‘He’s not going to knock me out and he’s not going to submit me, but I’m gonna give this guy hell for the next two rounds.’”

The No. 2-ranked contender hasn’t lost since, and when he puts his six-fight winning streak on the line, he knows he may have to dig deep once again. And he’s okay with that.

“He (MacDonald) is very well-rounded, but what he’s got tons of is heart and a frickin’ hard head,” Thompson said. “It’s the same thing I thought about when I was fighting Hendricks, that this guy is going to be very hard to put away. He’s going to be in your face pretty much the whole time and you’re going to have to mentally prepare for that because a lot of guys who take shots like that and keep coming, they can mess with your psyche. If I land my shots and not actually think about him still being there, like I did with Hendricks, you’ll be prepared for that and you’ll be able to go all five rounds. He (MacDonald) is going to take the best shot that I have and probably keep on coming. I just know that if I hit him with several of those shots, it’s going to do some damage.”