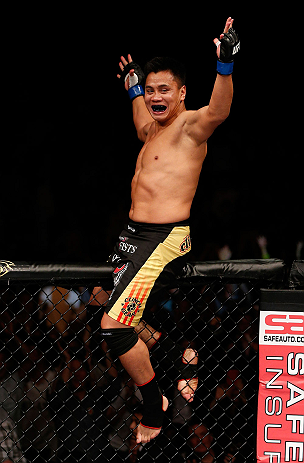 LE FINALLY LIVES UP TO THE HYPE

Cung Le has a cult following in the world of combat sports. That is particularly true in his adopted hometown of San Jose, California. All that existed long before he ever stepped into the Octagon to ply his trade against the best mixed martial artists in the world.

Through his first 10 fights, however, Le didn’t own a single win against a true marquee name. Sure, Frank Shamrock appears on his list of victims. If we are being honest with ourselves, Shamrock passed his fistic prime long before stepping into a Strikeforce cage to face Le. That win was the passing of the torch from one local hero to another. Nothing more.

His first opportunity against a big name, Wanderlei Silva, was a disaster. Don’t get me wrong. That was one of the best fights of the year—an unbelievably entertaining scrap. But Le got brutalized after having some success in the opening round. The knockout loss was as savage as it was beautiful. There is no shame to losing to Silva, but many believe that he is on the downside of his illustrious career. So if Le was truly a contender, he should have won the fight. That was the conventional wisdom heading into the matchup and the result didn’t change anything.

Le changed all that on Saturday night with one perfectly thrown counter right hook. The punch resulted in one of the most spectacular knockouts in recent memory. Former champion Rich Franklin (a guy who deserves to be in the Hall of Fame when it is all said and done) was completely unconscious before he hit the canvas face-first.

Le’s reaction showed just how important the win was for him. He was, by most accounts, viewed as a sacrificial lamb for Franklin, who was gearing up for one final run at the middleweight title. Somebody obviously forgot to send Le the memo

FRANKLIN FACED WITH SOME TOUGH QUESTIONS

Let me start by stating the obvious. Rich Franklin is one of the best to ever step into the cage. He also happens to be one of the nicest, most down-to-earth guys you would ever hope to meet, particularly for an athletic superstar. I have nothing but the highest respect for the guy, and I can’t help but find myself pulling for him. Maybe that is because we both live in Cincinnati, Ohio. The hometown connection, particularly for Midwesterners, is hard to overcome.

With that said, Saturday’s knockout loss raises the dreaded “is it time” question. Professional fighters face the unenviable task of trying to earn enough money during their short athletic prime so that they can walk away from the sport before it forces you out—violently and unforgivingly. Former champion Forrest Griffin said it best. It went something like this: “I’m going to fight until I can’t fight any more, and then I’ll fight a couple more times for the money.”

I don’t think Franklin is anywhere near the end, in terms of being able to continue competing at a high level. Can he become a champion again? I’m not so certain, unless the stars align perfectly. Does he need to further solidify his place in UFC lore? I don’t think so. Absent winning the title for a second time, I don’t think there is anything else he can do to cement what I believe already to be a Hall of Fame worthy resume.

So the question is whether he needs to continue fighting in order to make sure he accumulates enough money to live comfortably for the rest of his days? I have no clue about his personal finances, but I’m guessing that “Ace” already has that taken care of. Even if he doesn’t, this guy can earn money in his post-fighting career in numerous ways, whether as a business owner in Cincinnati, where he is a true star, or by joining the UFC’s broadcast or executive crew.

The only reason I raise the question is that Franklin has suffered two really bad knockout losses in his last five fights. He also got badly rocked in his rematch with Wanderlei Silva back in June. Chuck Liddell appeared to hurt him pretty badly with a head kick two fights earlier. I’m not suggesting that he is getting a bit chinny. Others are certainly saying that. I’m not among them. But damage does accumulate over time, and at the ripe old age of 38, Franklin is closer to the end of his career than he is the beginning.

I’m sure Franklin will do precisely what he said he would do after the fight, which is put some time between the loss and any decision about what is next. If I had to guess, I’m betting that Franklin isn’t done. Not yet. I think he has a couple more mega bouts left in him. There is no doubt that the competitive side of him will want to compete in those bouts. The bigger question is whether the intellectual side of him wants it anymore.

NOT THE SILVA OF OLD YET, BUT A GOOD FIRST STEP

August 29, 2009. That is the last time that Thiago Silva scored an impressive, clear-cut victory. He dominated Brandon Vera during that period, but the unanimous decision win was changed to a no-contest after Silva failed a post-fight drug test. It suffices to say that the Brazilian’s career was on life support when he stepped into the Octagon on Saturday night.

The one-time top contender used the opportunity to right the ship with a spectacular, well rounded effort against previously undefeated Stanislav Nedkov. Silva looked remarkably light on his feet, something we haven’t seen since the early days of his UFC career. That suggests to me that his back has fully healed.

Of course, the effort wasn’t without some moments of trepidation, but he reacted extremely well when faced with adversity. Silva looked winded far too early in the fight, and he was definitely hurt in the second round by a big right hand. He fought with more control and restraint than usual to combat his rapidly depleting gas tank (which was likely due to an adrenaline dump after having been absent from competition for seven months). He countered getting rocked by remaining calm and relying on his excellent striking technique, rather than putting his head down and swinging wildly. Well, he did plant and play rock’em, sock’em robots at one point, but his back was against the cage at that moment and he hadn’t yet been rocked, so the choice made sense.

Silva still has a ways to go before he returns to the prominence that he once enjoyed. But Saturday night was a strong first step in that direction.