"I plan on being the absolute best fighter I can be. If that means a run and a title shot, so be it; that’s what I’m here to do." - Mac Danzig 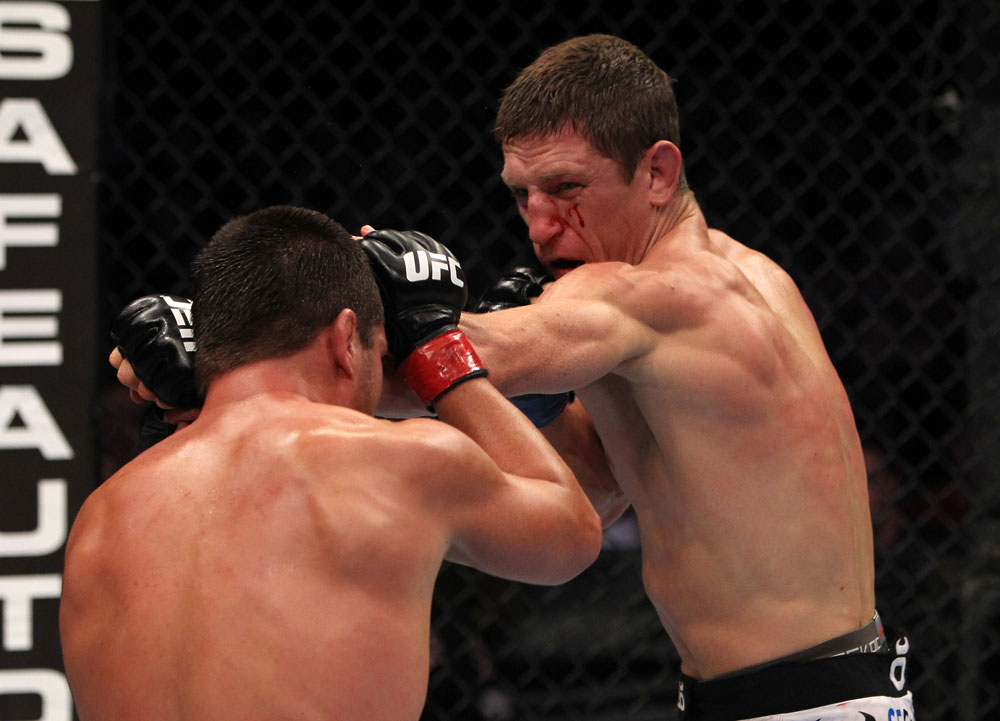 After more than five years and 10 fights inside the Octagon, fans and fellow competitors alike probably feel they have a good idea of what Mac Danzig is going to bring to the table on November 10 when he steps into the cage to take on Takanori Gomi.

A fixture in the UFC lightweight division since winning the welterweight competition on Season six of The Ultimate Fighter, Danzig has been a fixture in the middle of the loaded lightweight division. He has competed against some of the best the division has to offer, including engaging in a memorable, bloody battle with Jim Miller at UFC 100, but at times, Danzig has struggled to find consistency and remain healthy, resulting in a 5-5 record in the UFC (22-9-1 overall) and a handful of missed opportunities.

While the lightweight division seems to add a new contender with each passing event, few would anticipate Danzig joining that list at this stage of his career. He profiles as a tough veteran out in the middle of the division, not a guy poised to make a run in 2013.

But against Gomi, Danzig is focused on proving that even at this stage of his career, he’s capable of becoming a title contender.

“I’m in a situation where I finally really believe in myself. That was the problem before; I really struggled with that,” admitted the former Ultimate Fighter winner. “I realized I was good to a certain extent, but I was happy with the level that I had achieved – being in a world-class organization, being a quote-unquote world-class fighter, but didn’t really think that I had what it takes to win a title. I was just telling myself that I wasn’t concerned with it, but now that I’ve had the chance to look at things from a different perspective, I really feel like accepting mediocrity is one of the worst things you can do.”

The Los Angeles, California resident gives a lot of credit for his shift in mindset to a renewed working relationship with Rico Chiapparelli. Danzig first connected with the former National champion wrestler-turned-pioneering MMA coach early in his professional career as Chiapparelli was starting to withdraw from the sport. The two reconnected in advance of Danzig’s bout against Efrain Escudero at UFC 145, and have been working together ever since.

“When I first started working with him again, he’s a little more communicative than he was in the past, and he told me that he wasn’t really interested in training someone that didn’t want to become great,” Danzig offered. “That made me stop and think. I thought about what he said, that he believes in me enough to think that I can do it, and I wasn’t sure that that was the mindset I had going into this anymore. I was like, `Maybe I need to change the way that I’m thinking about this.’

“Working with Rico and knowing his mindset – that you want to compete against the best and beat the best, otherwise there is no reason to be doing it – that’s the mentality I have now. I’m happy to be making a living in this sport, but I’m not looking for handouts or easy fights; this is about a lifelong journey of trying to be excellent.

“I think I’m in the best possible position that I could be in,” continued Danzig. “I’m an older fighter who spent many, many years just going through the motions, doing nothing but sparring really. Now I’ve got really specific strategies. I’m journaling practice; everything is getting written down, and everything is getting filmed. We’re talking about everything, and all my coaches are on the same page. We’re all working together as a team, and I couldn’t be in a better situation. This is the best situation I think a fighter could ask for.”

While the perennial middle-of-the-pack competitor Danzig is looking to begin a slow and steady climb up the rankings for the first time in his UFC career, his upcoming opponent has already experienced life at the top of the lightweight division, and now he’s just looking to prove he still has something left to offer on the biggest stage of the sport.

Now 34 years old, Gomi was once considered the best lightweight in the sport, amassing an impressive 13-1 record prior to his controversial “No Contest” result against Nick Diaz at Pride 33 in February 2007. During that time, “The Fireball Kid” earned stoppages over the likes of Charles Bennett, Jens Pulver, Tatsuya Kawajiri and Hayato “Mach” Sakurai.

It has been an up-and-down run for the Japanese standout over the last five years, as Gomi has gone just 6-5 in that time, including beginning his UFC career with a 2-3 record. Each of those losses came to top of the division competition – Kenny Florian, Clay Guida, and Nathan Diaz – and knockout wins over Tyson Griffin in August 2010, and most recently against Eiji Mitsuoka at UFC 144 in February showed that despite his struggles, Gomi still carries the lethal knockout power that made him one of the best lightweights in the world earlier in his career.

“This fight is a test,” explained the cerebral Danzig. “It’s not something that’s really going to give me a lot of credit with the fans or what the critics think because if you look at Gomi’s last year or two, it hasn’t been that great; a lot of people have written him off regardless of the fact that he was #1 in the world. The truth is that he hasn’t looked like the old Gomi, but you never know who is going to show up. We don’t know what’s going on in his head. He might feel the same way I do. This could be a situation where he feels like he doesn’t want to throw this away, and he could come out there better than he ever has (in the UFC). I have no idea.

“It’s an honor to fight him; I will tell you that much. (He) is always capable of (returning to) what he was in the past, and for all I know, he’s spent the last 12 weeks working on honing that again. If he doesn’t, he’s still got that shot, and that’s why he’s in the position that he’s in, and that’s why he’s still in it – he’s still got that shot and he still goes for it. (He’s) a guy who is dangerous all the time, and it’s a perfect fight for me to get through some anxieties – to pass the test of not letting a power-puncher land that one big shot on me like he wants to, and just completely outclass him.”

Danzig knows the things he’s expressed pre-fight are a refrain heard many times before in mixed martial arts, and that stringing together the requisite victories to make a run at the title is a difficult task, with the lightweight division standing as the most talented and most competitive division in the UFC.

The veteran competitor knows the 155-pound talent pool is a shark tank full of dangerous opponents, and one loss can set him back considerably. Though a run to the top of the weight class and winning a champion tops his list of “Things to Do” before his career comes to a close, Danzig is now in a place where win or lose, he can be confident that he’s given his all and made the most of his talents.

But after spending a number of years content with the view from three-quarters of the way up the mountain, the veteran lightweight has his sights set on reaching the summit, and plans on starting his journey towards the top with a win over Gomi.

“I plan on being the absolute best fighter I can be. If that means a run and a title shot, so be it; that’s what I’m here to do. I absolutely believe I can do it. If not – if it doesn’t work that way – at least I know I didn’t half-ass it; that’s the important part.

“I think that no matter what, at the end of the day, the way that I’m working now and the way that I’m doing things now, when my career is all said and done, regardless of if I win a title, knowing that I did it right and that I went at it with everything that I had, and did my best to be great would be almost just as satisfying.

“The point is to be a world champion, and I really don’t feel that old; my body doesn’t feel that old. I feel smarter than I ever have been in my career, and I’m not saying that for sure I’m going to destroy everybody that I fight from now on – it’s a crazy sport, it’s a hard sport to be involved in – but absolutely 100-percent I plan on competing for a number of years and doing whatever it takes to finally climb to the top of the mountain.”